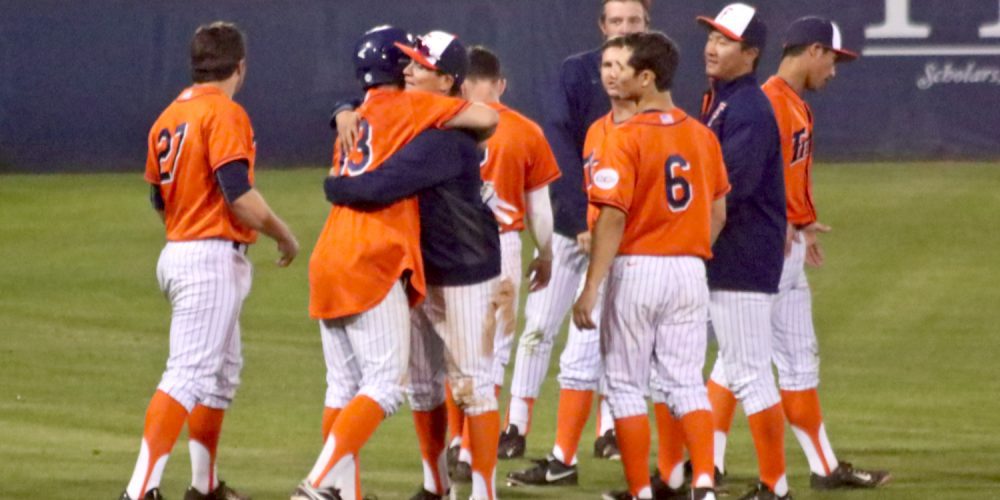 Hugs all around for Timmy Richards after his 10th inning walk-off homer. (Shotgun Spratling)

FULLERTON, Calif. — Cal State Fullerton is used to close ball games. The Titan Way is to rely on pitching and defense and then try to scratch together a couple of runs. It’s been a calling card of the blue-collar program for years.

So an inning after the Titans left two runners in scoring position to send the game to extra innings, head coach Rick Vanderhook called together Timmy Richards and his middle-of-the-lineup batter due up against Maryland lefty reliever Robert Galligan in the tenth inning.

Vanderhook told the four upperclassman to harken back on their previous experience in similar late-inning situations in tight games.

“Use your experience. You guys have been playing here the longest. Let’s go get a W and go home,” he told the group.

But Tanner Pinkston, Dalton Blaser and Taylor Bryant never got a chance to heed Vanderhook’s advice. Richards jumped on a first-pitch fastball and roped a laser to left field that sailed over Marty Costes head, clanging off signage for “The Bench” sports bar for a game-winning walk-off home run.

“I just went up there looking for a fastball…got it first pitch and I was ready to go,” Richards said. “I had a feeling it was going, but I didn’t trust myself. I just tried to run hard out of the box and listened for my first base coach to say ‘That a boy!’ when it went out.”

Richards’ solo homer gave the Titans a 3-2 win at Goodwin Field to open the series against Maryland (7-10).

Cal State Fullerton took an early lead in the third inning when Tanner Pinkston lifted a fly ball into left field that was deep enough to score Josh Vargas. The Titans added an insurance run in the fifth inning on a double play groundout, but Maryland wouldn’t go away.

Despite having just one hit into the seventh, the Terrapins battled back. In the eighth inning, Marty Costes singled home a run. Maryland was able to even things up later in the frame when Andrew Bechtold hit a nubber to the right side that didn’t travel more than 15 feet, but got the job done.

Maryland’s two runs took the win away from Fullerton starter Blake Quinn, who had electric stuff, but trouble locating it on a consistent basis. He struck out eight in five innings, allowing just one hit and four walks.

A pitcher’s duel was expected once again between Maryland ace Mike Shawaryn and Cal State Fullerton. Last year, he and Thomas Eshelman hooked up for a classic with Shawaryn getting the best of the matchup, pitching eight spectacular shutout innings. He allowed only four hits, no walks and struck out 13 while Eshelman was saddled with a 2-1 complete game loss due to a pair of unearned runs.

This time around, it was Blake Quinn against the Preseason All-American. But it was a pitchers duel that lacked the luster of 2015’s face off. Quinn had great stuff, allowing only one hit and striking out eight, but struggled to consistently command his pitches, walking four and only lasting five innings.

Shawaryn went six innings, allowing five hits, four walks and two runs (one earned) while striking out four. He was in line for the loss until the offense rallied in the eighth inning against the Cal State Fullerton bullpen. As has been the case throughout the season, Shawaryn showed flashes of his 2015 stuff, but not the crispness and consistency that made him so dominant last year. 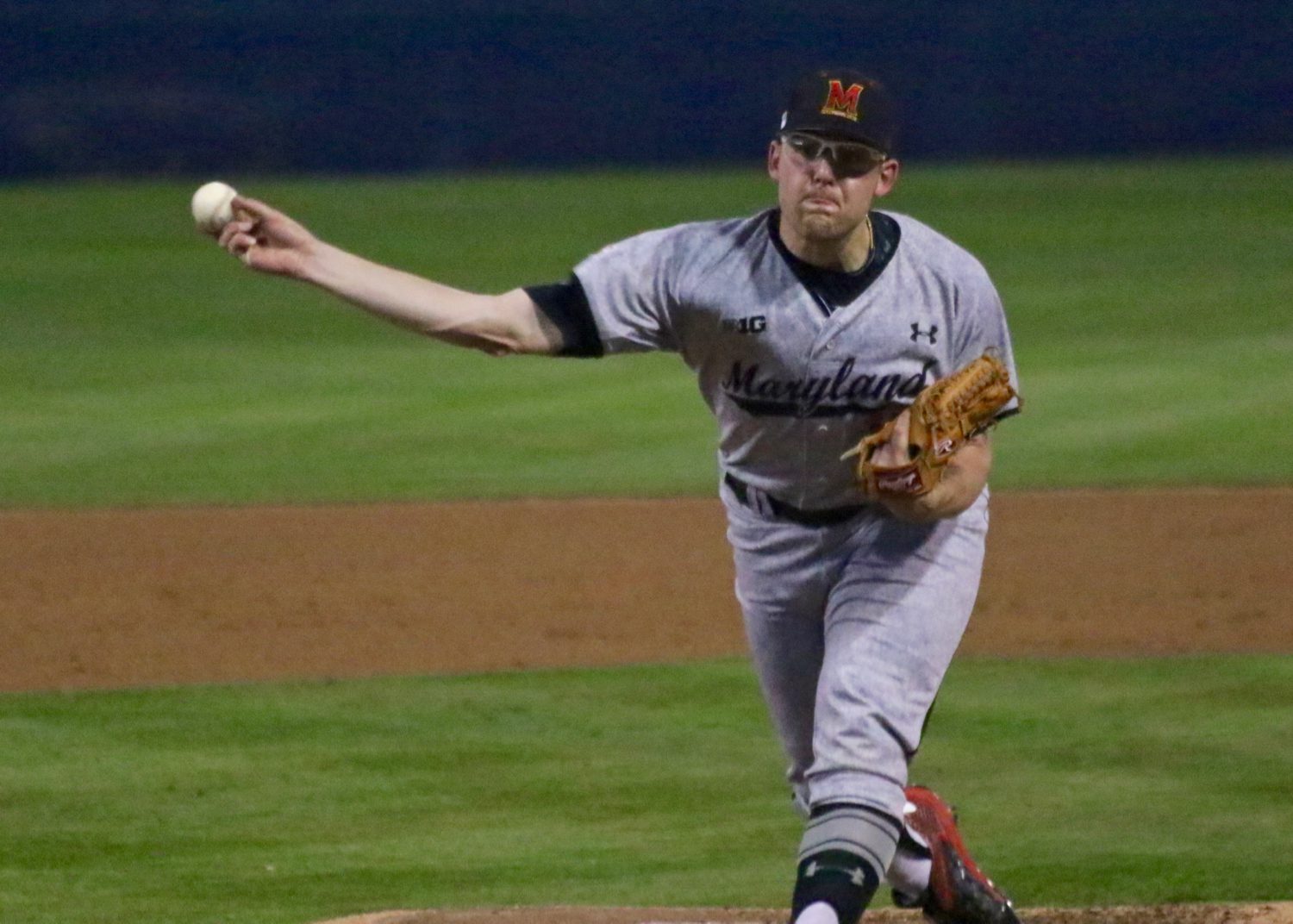 He has put up solid numbers in his first five starts, going 2-1, 2.97 but he hasn’t been the lights out All-American he was last year. His strikeout rate is down from 10.7 K/9 to 6.8 and his walk rate has increased from 2.3 BB/9 to 3.9. Multiple people at the Fullerton game, including two scouts, noted that Shawaryn’s arm angle appears to be lower than his 2015 campaign, which could be the root of his “struggles.” With more of a sidearm slot than a two-thirds or three-quarters angle, Shawaryn isn’t getting the same dual-plane break on his slider and his changeup has lost some fade.

However, Shawaryn is such a competitor and veteran pitcher, he is still routinely getting guys out. The lower slot may be giving his fastball even more late run and is forcing guys to pound the ball in the ground when it is down in the zone, but he his inability to consistently command the pitch has meant some pitches up in the zone that hitters have been able to jump on.

Cal State Fullerton outfielder Josh Vargas was sent home and did not play in the Titans’ 8-1 victory over San Diego State on Tuesday night. He was then conspicuously pinch ran for in the seventh inning of a two-run game on Friday night.

Vargas wasn’t in trouble, but his coaches wanted to rest him and try to get him to recover as he, head coach Rick Vanderhook and a handful of players and team personnel have been struck by the flu bug. While some of the players recuperated throughout the week, others like Vargas were still feeling the effects on Friday. But you wouldn’t be able to tell from his performance.

The Titans’ leadoff hitter was 2-for-3 with a walk. He set up Fullerton’s first run of the game when he walked, stole second and went to third when the throw skipped into center field.  Vanderhook later pinch ran for him after he reached his third time because Vargas was still feeling the effects of the flu and had nearly got sick while previously running the bases.

Maryland RHP Mike Shawaryn talks about his no decision against Cal State Fullerton (6 IP, 5 H, 2 R, 1 ER, 4 BB, 4 K) and how he battled to keep the Terrapins in the game despite not having his A+ stuff. Shawaryn also discusses Maryland’s comeback to tie the game:

– Maryland dropped its sixth game by two runs or fewer, falling to 7-10 on the season. For the Terrapins to get back on track, the veterans have to step up to their abilities. Anthony Papio may have taken the first step toward that on Friday night, reaching base three times. He notched a pair of line drive singles to raise his average above the Mendoza line. One thing that is concerning is Mike Shawaryn’s lack of sharpness that he had last season. Nevertheless, his bulldog mentality on the mound enables him to give the Terrapins a chance to win every time he toes the rubber.

– With the pitching staff that Cal State Fullerton has, the offense only needs to score three or four runs a night to win.They don’t beat themselves with silly mistakes, making only nine errors thus far this year and the Titans have allowed more than three runs only twice in 17 games. Fullerton just needs a couple of clutch hits each night. Josh Vargas is capable of doing that and Timmy Richards is proving to be the heartbeat of the lineup with his ability to get on base and also provide some pop.