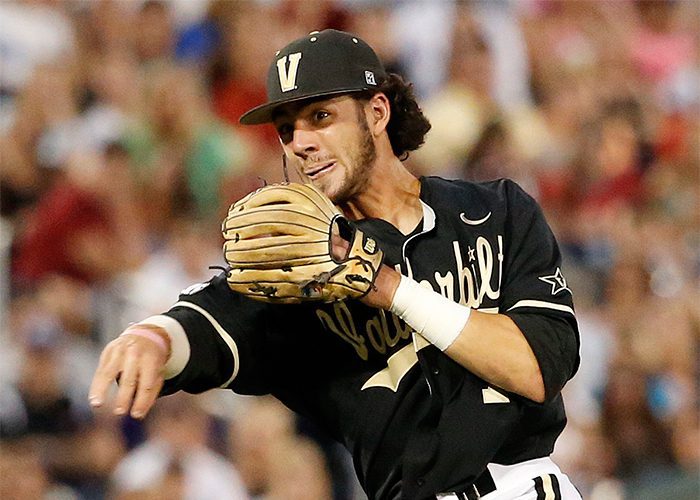 CHAMPAIGN, Ill. — A hellacious Sunday night deluge forced a 19-hour postponement of Game 2 of the Champaign Super Regional, which set up a deluge of a different sort: Dansby Swanson went 2-for-3 with a home run and a double off Illinois lefty Tyler Jay en route to a 4-2 Vanderbilt victory, and within an hour after the final pitch was thrown, both players were taken first and sixth, respectively, in the MLB draft.

“Yeah, I can’t complain, that’s for sure,” Swanson said. “It’s a surreal moment, especially to be with all my loved ones … You can’t script the moment any better than that, just to be able to enjoy the moments with the people closest to you, it’s pretty phenomenal.”

Earlier in the season, Illinois pitching coach Drew Dickinson forecast just such a situation as the Illini found themselves in on Monday afternoon.

“We’ve kept (Jay) stretched out, because you know there might be a time in Omaha or the postseason where you’re going to want him to start, because it’s a must-win, and he can go get it,” Dickinson said at the time.

After Vanderbilt crushed Kevin Duchene and Illinois 13-0 — and considering the all-black pinstriped getups the Commodores wore, it could rightly be called the Saturday Night Massacre — Illinois found itself in a must-win situation for the first time all year, and sure enough, head coach Dan Hartleb went to his closer and told him to go get it.

Jay came out of the gate with top-level stuff, sitting 93-94 with arm-side run on his fastball, relying exclusively on that and an 85-89 mph slider the first time through the order before mixing in a high-70s curveball as he got through the Vanderbilt lineup a second and third time.

Jay went for 6 1/3 innings, throwing 70 of his 96 pitches for strikes, striking out six and walking none. He was every bit as good as advertised, even in his second-longest outing of the year. And his effort would’ve been good enough to beat just about any other opponent he faced this year.

“You think about his situation and how he came into today and how motivated he was, we really had to battle to break him,” Vanderbilt head coach Tim Corbin said. “We just barely did. We probably never broke him but we just scratched enough in order to move one run ahead of them.”

Unfortunately for Illinois and Jay, the Commodores are a different class of opponent, playing on what looks at times to be a higher plane of consciousness, and the Commodores tagged Jay for 10 hits, two of them homers, six stolen bases (by six different players) and four runs.

“He battled,” said Illinois right fielder Casey Fletcher. “He’s our main guy and we put him in a spot where, hey, we need you to come up big and he battled his butt off today. Just so happened he left a couple pitches up and they ended up out of the ballpark. He threw a great game today. Vanderbilt is a really good-hitting team. We just didn’t put up enough runs to win the game.”

In the second inning, Zander Wiel took a Jay fastball the other way for a deep home run to right field, and after an ugly-looking, three-whiff strikeout in the first inning, Swanson came back in the fourth to hit a hanging slider (one of very few mistakes Jay made all afternoon) over the left-field fence. Two innings later, Swanson inside-outed a fastball to right-center to lead off the sixth, stole third and came home on a two-strike, two-out RBI single from Bryan Reynolds, who had himself been made to look foolish in his first two plate appearances.

“He was just locating really well, staying down in the zone and his slider was working well,” Swanson said. “He was just able to locate on my back foot, so I was able to clear a little bit of space for myself. And just look over the plate and just adjust to what would come and I was able to cut my hands across a slider that was left up a little bit.”

Illinois had its chances against Vanderbilt starter Philip Pfeifer, who struggled in the first two innings. Pfeifer ran three-ball counts on the first four batters he faced, en route to loading the bases with one out, but Illinois could manage only one run in the top of the first. The Illini put two men on in each of the next two innings, and had at least one man reach in each of the first five, but started the sixth tied 2-2, despite Vanderbilt making outs at the plate in the third and fourth innings.

“(Struggling early is) nothing new, really,” Pfeifer said. “Starting off a little out of rhythm has kind of been my M.O. But you know, I think if I’ve learned anything from the past two years, it’s going to look bad before it looks good. So I had faith in myself and faith in our hitters who battled their butts off today.”

“I would say he was up early, and I think once we scored a couple runs on him, he really started painting corners on us,” Fletcher said.

From there, the Commodores started to get to Jay, fouling off the slider instead of whiffing on it, reading the outside fastball for a ball instead of chasing it, as they got more and more looks at him. Vanderbilt tagged Jay for the go-ahead run in the sixth, off Swanson’s double and Reynolds’ single.

Illinois had a chance to reply when Ryan Nagle’s two-out double ended Pfeifer’s day, but reliever Ben Bowden struck out Reid Roper to end the threat. In the bottom of the inning, Vanderbilt chased Jay. Whether through fatigue or luck or Vanderbilt’s hitters just having seen him three times, Jay started to get hit consistently. Karl Ellison and Ro Coleman singled, and Rhett Wiseman laid down a perfect bunt to score Ellison and reach base himself, making it 4-2. Nick Blackburn struck out Swanson and Wiel to end the inning, but that was it.

In the blink of an eye, the Illini went from being tied and having their best pitcher on the mound to having only six outs in which to score two runs against a rested Vanderbilt bullpen. In the top of the eighth, Jason Goldstein and Pat McInerney, who’d combined for a 2-for-29 start to the NCAA tournament, singled around Fletcher’s strikeout, and with David Kerian, then Will Krug to come, Bowden delivered an unintentional intentional walk to Kerian to load the bases.

At some point, watching Vanderbilt year after year becomes amazing — how do they keep finding so many good players, losing key contributors to the draft year after year and never losing a step? Last year, bases-loaded, one out in the eighth would’ve been the providence of Adam Ravenelle, who went pro, or Hayden Stone, who got hurt. Instead it was freshman Kyle Wright, who’d posted a 1.09 ERA with 53 strikeouts in 49 1/3 innings, like that’s something freshmen do routinely in the SEC, who got the call.

Wright got Krug to hit a medium-depth line drive, and while Illinois usually runs the bases aggressively — the third-inning run came when Fletcher tested Reynolds’ arm on a single to center field — third-base coach Spencer Allen didn’t force the issue with Goldstein running and Wiseman throwing. Ryne Roper struck out to end the inning, and Illinois never threatened again.

“Kyle Wright, bases loaded, one out, freshmen don’t do that,” Corbin said. “That’s just tough to do, to get a strikeout and then get the third out.”

Wright retired the last Illinois hitter at 6:02 local time. Ten minutes later, Swanson had been drafted by the Arizona Diamondbacks, and by 7 p.m., Jay had gone sixth overall to Minnesota and Fulmer went to the White Sox at No. 8. About an hour and a half after Fulmer was picked, Walker Buehler — who didn’t even pitch this weekend — went to the Dodgers with the 24th overall pick.

Having three top-10 picks in the building — plus Detroit Tigers pitcher David Price, who went No. 1 overall out of Vanderbilt in 2007 and came down on his off day — made for a postgame climate that was, if not unique, then close to it.

Swanson managed to compartmentalize the draft and the game on the biggest day of his career.

“Honestly, it’s two separate things,” Swanson said. “I was at peace with both just going out there and just competing … I can’t control anything going on around me. I was just going to control my effort and focus and let everything else pan out.”

Illinois will suffer catastrophic attrition to the draft: Between graduating seniors and juniors likely to go pro, the Illini will lose as many as six starting position players, four starting pitchers and three key bullpen arms from a team that counted depth and stability among its greatest strengths.

Kerian and Fletcher, both seniors, were hopeful that their success would pave the way for more of the same, even if next year’s team is going to look different.

“I think we did a lot, for a Northern school to be able to make it this far and host a super regional is awesome. A lot of recruits will come here and facilities will keep getting better,” Kerian said.

Fletcher added: “Hopefully (we’ll have) new stadium but we have Tyler Jay for that”

Meanwhile, Vanderbilt is taking its three first-rounders to Omaha for the second year in a row.

“We’re just very thankful that we can get to the point, storybook ending,” Corbin said. “You’ve got (Price) the No. 1 guy in the country here to watch us play from Chicago, he’s got the day off, and he’s standing there watching (Swanson) get picked, No. 1 in the country today. So the whole deal is just surreal and kind of jaw-dropping to say the least. Just a great day for Vanderbilt University and the kids. I’m just so happy for the kids.”