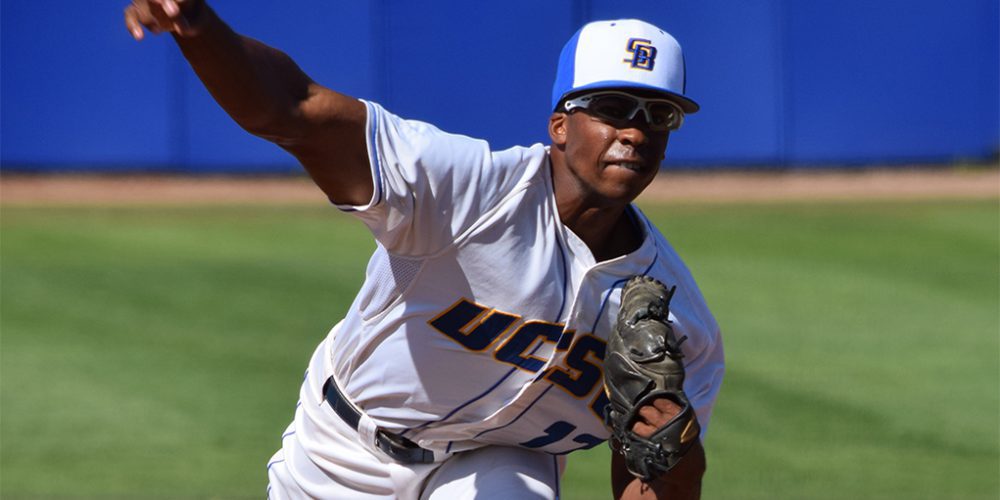 Walk into the ballpark nestled along the Pacific Ocean, and it’s always easy to tell when Tate is on the mound. The scouts and radar guns combined outnumber fans in the lower bowl of the ballpark, and there’s just that constant buzz in the air each time No. 17 takes the mound for the Gauchos.

That’s been the story of Tate’s life the past couple of months. The talented righthander entered the 2015 campaign with high hopes after putting together an impressive summer with the USA Baseball Collegiate National Team. But as dominant as Tate was out of the bullpen, UCSB head coach Andrew Checketts decided to move his power-armed righthander into the rotation when projected starter Dominic Mazza tweaked his ankle just before opening weekend. And from there, Tate’s evolved into one of the premier arms — if not the premier arm — in the country. Tate has displayed explosive stuff in each of his starts, and a lot of buzz on the scouting circuit has the 6-foot-2, 200-pounder as one of the leading candidates to be the top overall draft pick. 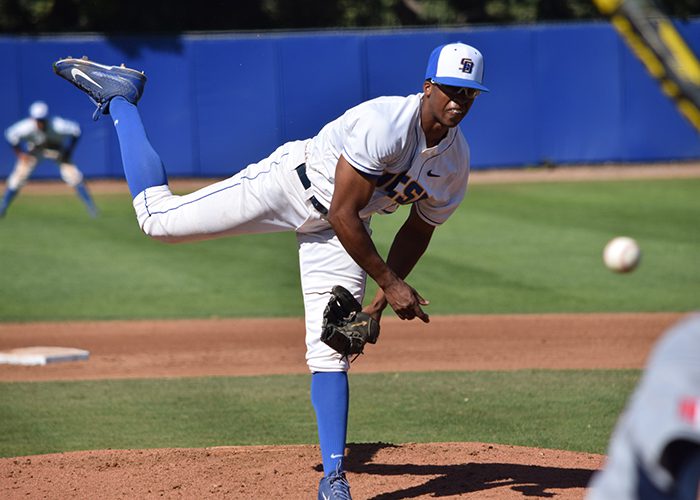 In many instances when it comes to the draft, you could say the hype might outweigh the substance. But that couldn’t be further from the truth with Tate, whose imposing presence and overall stuff is very impressive. But Tate is a self-made man. He wasn’t some high-profile prospect out of high school. As a matter of fact, he went undrafted, and there were plenty of question marks about whether he could even be a significant contributor for the Gauchos.

But, boy, has that all changed. Tate, who has a 1.34 ERA in 60.2 innings, along with 67 strikeouts and 16 walks, is truly one of the great college baseball success stories.

“You get to see the stuff from him a lot more as a starting pitcher as opposed to a closer because you’re not using as many pitches as a closer. You saw that fastball and slider as a closer, but you’re seeing it all now,” UC Santa Barbara head coach Andrew Checketts said. “His velocity in the closer role has a chance to be more upper 90s, and potentially touching 100, if he was a back-end guy. But he’s been phenomenal as a starting pitcher. Pretty electric.”

Electric indeed, and even more astonishing considering where Dillon Tate came from.

While many current high-profile college junior pitchers had options coming out of high school, Dillon Tate definitely wasn’t one of those guys.

Tate was a skinny 165-pounder in high school, and his stuff certainly wasn’t in the same vicinity as it is today. The righthander was a mid-80s pitcher his junior season in Claremont (Calif.) High, and it was then Checketts and the Gauchos decided he was worth investing some scholarship money in, even though he was not ranked anywhere near the top of prospect lists. Sure, Tate didn’t have the premium velocity or size, but Checketts felt like, with a little hard work, he could evolve into a quality bullpen option.

“There was some arm strength there. He had a quick and loose arm, and that led us to believe, along with his delivery, that there was a chance for more velocity in there,” Checketts said. “Then, by the senior year of high school he was up to 90-91, and the summer after he went undrafted, he was up to 93-94. So we knew there was some arm strength there.

“But that was only one part of it. Sure, Dillon threw hard by the time he went to college, but he didn’t have the secondary stuff, he didn’t have any feel for offspeed stuff, and his breaking ball was 62 mph, and by the way, he couldn’t throw it for strikes. It was just a really, really slow 12-6 curveball.

“I don’t know if we saw him being a prospect type of pitcher, and I’m not sure we ever saw him being a true four-pitch-mix guy like he is now,” Checketts continued. “We thought he could be a back-end-of-the-bullpen arm strength type of guy, and potentially not much else. He was just raw, and he didn’t have very good command at all.”

Most pitchers with 90-plus velocity out of high school would have a legitimate chance to be an instant impact type of guy with the usual limited pitching depth some of the smaller programs in college baseball tend to have. But Tate had trouble finding his way in his first season with the Gauchos. As the Gauchos fought their way to a regional, Tate found himself on the sidelines. He made just four appearances as a freshman and had an ERA of nine in just three innings.

There was a good reason why he rarely threw as a freshman.

“It’s crazy to think about, but his freshman year, he literally couldn’t get out of an inning in an intrasquad game. He couldn’t get three outs. He was just getting destroyed out there,” Checketts said. “So, as a result, he only had a few outings his first year, throwing a couple of mop-up innings here and there.

“We got to the point where we knew we had someone with a good arm, and we knew we wouldn’t have him for very long. We knew there was a chance he wouldn’t perform, but we also knew that someone was going to draft him and he’d definitely be gone after his third year.”

Following his freshman campaign, Checketts and Tate had a frank discussion. The rising head coach wanted Tate to head off to a summer league somewhere, working to refine his repertoire in that fashion. Tate, though, was very committed to his way of doing things, and decided to spend the summer working out at the MLB Urban Youth Academy in Compton, Calif.

Tate came back his sophomore season a completely different pitcher. He had gained almost 30-40 pounds of muscle and went from 165 pounds to 200 pounds. With those advancements came vastly improved overall stuff. He showed electric stuff at times as a sophomore with mid-to-upper 90s velocity, and the development of his slider and changeup were huge pluses. He finished 2014 with a 1.45 ERA in 28 games, along with 12 saves and 46 strikeouts in 43.1 innings.

“He’s a thinker, and he’s a worker. He’s put on 40 pounds since he’s been here, and his velocity has really skyrocketed. And honestly, he’s still got more room for some body fat,” Checketts said. “He can put on another 10-12 pounds in pro ball.

“Dillon loves the weight room and he was really able to lift aggressively throughout that summer after his freshman season. He was lifting for mass, trying to improve mobility and preventing injuries. And he’s shown more velocity by doing that way. I guess it’s a good thing he didn’t listen to me.”

Tate’s sophomore season opened doors to the big-time, including a date with the USA Collegiate National Team.

The Summer of Tate

Some might be surprised Tate has evolved into one of the nation’s premier arms and potentially the top pick in the draft, but Texas A&M head coach and last summer’s Team USA pitching coach, Rob Childress, isn’t the least bit surprised.

It didn’t take long after meeting the ultra-physical Tate for Childress to realize he had the potential for greatness. Every morning while on the road, Tate would always eat very healthy and adhere to a strict diet. And when he had the time, Tate was working out in the hotel’s fitness facility. On top of that, and perhaps most impressive, Childress enjoyed how the righthander would take notes on all of his appearances. 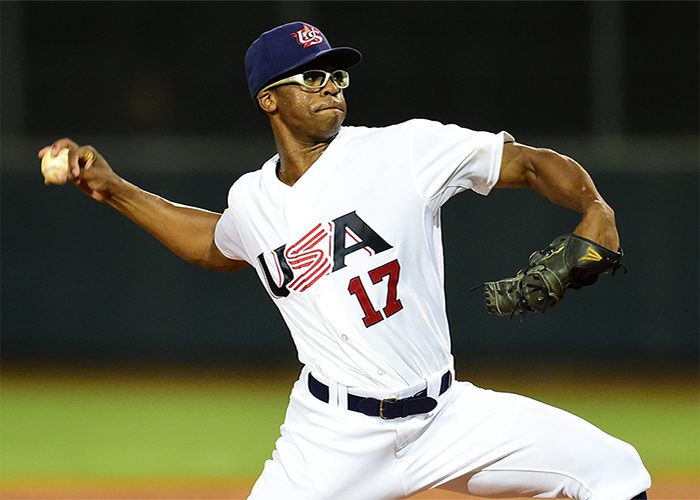 Dillon Tate rose the charts as a reliever for Team USA. (USA Baseball)

“Dillon is such a wonderful kid. He’s got a neat family background and he has come from nothing from a baseball standpoint. His work habits have allowed him to blossom into this amazing pitcher, and you could just see it coming. He’s a great worker, preparer, and he’s just very, very disciplined in his daily regimen,” Childress said. “You could just tell this was a guy on a mission.

Tate, as with Illinois lefthanded closer Tyler Jay, greatly increased his prospect status with a strong summer with Team USA. He made 11 appearances and tallied a 0.79 ERA in 11 innings, along with three saves. He showed an explosive fastball, slider and changeup, and also flashed his now plus curveball at times.

“All of his stuff was pretty electric. It was just outstanding,” Childress said. “You could see it in Dillon, but he had the aptitude and ability to make an easy transition from the bullpen to the starting pitcher.

“Am I really surprised where he’s at right now? Not at all. He’s without question a 1-1 type of guy in the draft. He’s very athletic and he’s a big, strong physical kid. He’s very competitive on the mound and he just continues to get better. He’s just a really neat kid and player.”

Tate and UC Santa Barbara entered the season with high hopes, the Gauchos expected to take the next step in the Big West Conference hierarchy, and Tate expected to have a strong campaign, ranked the No. 15 college prospect by D1Baseball.com back in February.

The Gauchos have since emerged as the Big West favorite and are a top-15 club, while Tate has emerged as perhaps a leading candidate to be the top overall pick in the draft. The righthander was 93-95 mph and up to 96 with his fastball last week against Fresno, while his 84-86 mph slider was dominant to both lefthanded and righthanded hitters, and his changeup was a plus offering with downward fading action. Tate also is flashing a filthy 79-80 mph curveball that has big-time late breaking action.

Everyone in the baseball and prospect industry knows what Dillon Tate is now. But it’s important to remember what he was, too. That’s what makes his remarkable ascension most impressive, and surprising.

This guy gained 40 pounds in one offseason? He is obviously on steroids. No one can actually work hard and get better. It has to be steroids says all of the haters. Congrats Dillon!

Kendall Rogers
wpDiscuz
1
0
Would love your thoughts, please comment.x
()
x
| Reply
You are going to send email to