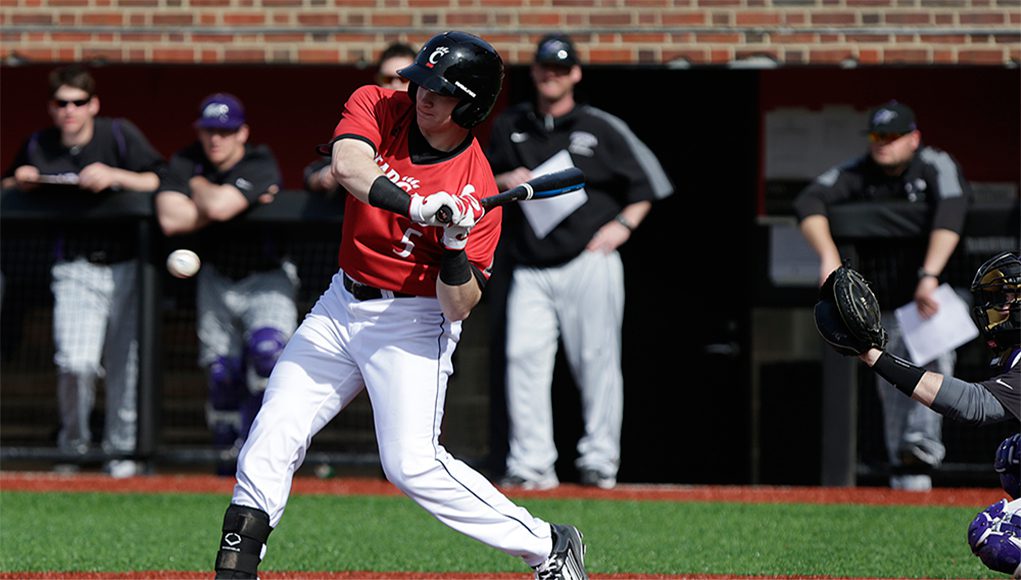 CINCINNATI — Ian Happ takes a while to figure out.

It’s unusual that you might find the best hitter in college baseball at a contest between two teams with a combined record of 2-14, in the uniform of a Cincinnati team that hasn’t made a regional since 1974 and at one point this season started nine freshmen in a game. But it’s not unheard of for a northern school without much history of producing top players to churn one out every now and again. Given the right conditions, first-round hitters can pop up anywhere.

Only that’s not what Happ looks like. He doesn’t tear around the field like Dansby Swanson or tower over his competitors like A.J. Reed or approach hitting with the extreme patience of Kyle Schwarber. Happ is listed at 6-foot, 205 pounds, but doesn’t look that big in person. He’s muscular, but very compact. Athletic-looking, but in a way that suggests “very good pickup basketball player” more than “world-endingly good corner outfielder.” Happ says that as a high school recruit who’d eventually go undrafted, the thing he liked best about Cincinnati was its business school. He looks like a 20-year-old finance major, which he is.

Happ is a switch hitter, but doesn’t prefer to hit from one side or the other. He’s played all over the diamond, but doesn’t have a favorite position to play. On whether he prefers to be aggressive or selective at the plate, Happ says “It depends on the situation.” Neither is he paying particular attention to honing one specific skill.

Cincinnati’s second-year coach Ty Neal has assembled an extremely raw roster that he’s trying to mold into a regional-caliber team. Neal was the pitching coach and recruiting coordinator on the Indiana team that went to Omaha in 2013, a team that found success in the Midwest thanks to late bloomers who developed into high picks while on campus: Schwarber, Sam Travis, Aaron Slegers, Dustin DeMuth. He thinks Happ is that quality of player, and a role model for his legion of freshmen to emulate.

[pull_quote_right]“He might be the best hitter I have seen in the last six or seven years,” Cohen said. “He’s really good. They played four games here, and their team did not play well, and that kid’s unbelievable. He had a hernia surgery, was not moving around very well but that guy, holy smokes he can hit. He just reminds you of a big leaguer playing college baseball right now.”[/pull_quote_right]

“For me, I just try to give them as much information as I can,” Happ said. “I think it’s a learning process for everybody, including myself, and I think they can learn a lot from the older guys who’ve been through it, who’ve played a lot of baseball games. That’s just where they’re lacking is experience, and if I can help with that, then that’s what I’m going to do.”

But he can hit. Happ doesn’t have elite contact or power tools, but at the plate he’s extremely polished and methodical–possessed of a “professional approach,” to repeat Neal. One way you can tell: Happ is a near-mirror image switch hitter. From either side of the plate, he stands in a moderate crouch, feet slightly open, bat at two o’clock. Being able to switch hit–and not just stand up there and slap from the left side, as so many switch hitters do–is the product of years of practice.

“I started working on it really young,” Happ said. “My brother actually tried to do it and he made sure that I stuck with it.” It didn’t stick with Happ’s older brother, Chris, who went on to play for Duquesne as a right-handed hitter, but the younger Happ’s been doing it in games since his freshman year of high school, and by now it looks natural.

“I’m trying to be as consistent as I can offensively,” Happ said, “just go up to the plate every time, have a quality at-bat and hit the ball hard.”

“He might be the best hitter I have seen in the last six or seven years,” Cohen said. “He’s really good. They played four games here, and their team did not play well, and that kid’s unbelievable. He had a hernia surgery, was not moving around very well but that guy, holy smokes he can hit. He just reminds you of a big leaguer playing college baseball right now.”

If you’re looking for the standout tool with Happ, you’ll walk away disappointed, not really understanding how this normal-looking kid is hitting .511/.623/.936, just laying waste to everything he sees at the plate. It’ll bother you until you realize that in your disappointment over not seeing a single 70 or 80 tool, your mental scouting report card on Happ is covered entirely with 50s and 60s.

Happ’s standout tool is that he doesn’t have any weaknesses.

He’s not a burner with elite defense at shortstop or center field, but he can run well and play anywhere. He doesn’t have elite power or bat speed, but he can hit the ball hard from both sides of the plate.

On Sunday against Niagara, Happ hit the first pitch he saw over the fence in left center. Two innings later, he watched three straight pitches go by, then swung at the fourth, a low changeup, and made a nifty adjustment mid-swing to keep himself from getting out in front of it and drilling it foul. That ball went out to left center as well. By that point, Niagara coach Rob McCoy had seen enough, ordering Happ to be intentionally walked in his last two plate appearances. In four plate appearances, two walks, two swings, two home runs, four RBI, three runs scored. It’s the kind of afternoon you can put together when you’re an expert in getting on base, willing to wait for your pitch, but ready to clobber the bejeezus out of it when it comes, and that’s what makes him so appealing to scouts.

“If you can hit,” Neal said, “you’re probably going to play baseball for a long time.”

Look at Ian Happ for a short while and you’ll wonder how this normal-looking kid from Cincinnati, who has no remarkable raw tools, turned into the best hitter in college baseball and a potential Golden Spikes contender and first-round pick. It’s the kind of question that you’ll sit there and ponder for a while, until you realize that you’ve been watching him for days, and you haven’t seen a single thing he does poorly, and the other team still can’t get him out.