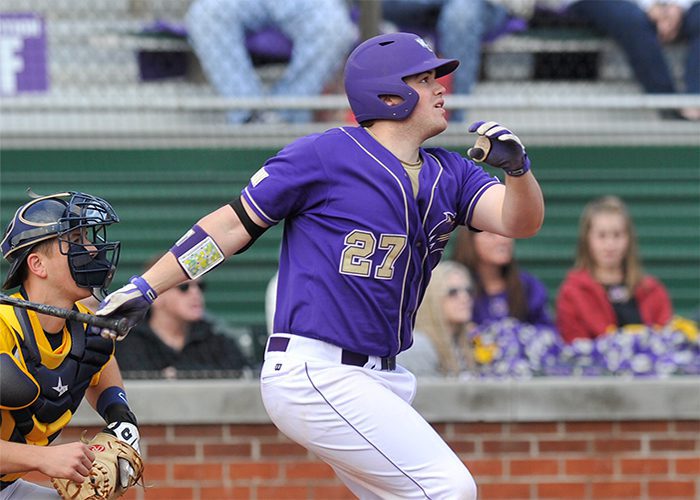 Bold indicates projected regional team, and records are from 2014. Teams are listed in order of projected finish.

Freshman of the Year: Drew Ellis, The Citadel

• Western Carolina just missed out on a regional berth in each of the last two seasons and has a chance to take that next step in 2015. The offense should again be one of the league’s best thanks to returnees like slugging 1B Jacob Hoyle (.332/14/53), C Danny Bermudez (.305/1/12), and 2B Bradley Strong (.339/6/53). Hoyle has hit in the middle of the WCU lineup since he was a freshman and brings big righthanded power and enough arm strength to also contribute off the mound. Strong makes the Catamounts go from the top of the lineup, bringing speed as well as strength and hitting ability. Bermudez was an all-star in the Cal Ripken Collegiate League last summer and has taken a big step forward offensively since last spring, making him the likely No. 3 hitter. He’s also a valuable leader and captain who handles the pitching staff well. Look for juco transfers Austin Atwell and Kramer Ferrell to join the emerging Matt Smith (.260/0/6) in the outfield. Brett Pope is a highly regarded freshman who should play third. J.D. Long (.213/1/27) is a good defender at shortstop who came up with some timely hits last year when star Aaron Attaway went down with a wrist injury. Dale Urquhart (.143/2/3) has power upside as the DH, helping make this lineup deep and dangerous once again. On the mound, lefty Bryan Sammons (7-2, 4.50) was the Saturday starter last season and figures to move into the Friday role this year; he’s a fierce competitor who spots his mid-80s fastball well. LHP Taylor Durand (0-0, 8.00), who can tickle 90 with his heater, is one of the most improved players on the team and should also start. Freshman LHP Brandan Nail is a starting candidate along with RHP Korey Anderson (1-0, 4.32). Taylor Powell (2-0, 1.44 with 13 saves) is a reliable closer who pumps strikes with an 88-92 mph fastball, while Colton Davis (4-2, 4.64) is another solid arm who can reach 93.

• Mercer joins the Southern Conference after 35 years in the Atlantic Sun. The Bears lost a lot of offense but fortunately return some key pitchers. Ace Eric Nyquist (8-1, 3.12), a dogged righthander with advanced pitchability who had a nice summer in the Cape Cod League, anchors a rotation that also returns RHP Ryan Askew (3-3, 3.54) and LHP Grant Papelian (5-4, 4.13). Senior D.J. Johnson (7-2, 3.06 in 2013), a wily 5-foot-9 righty with good feel for an 86-88 fastball and a swing-and-miss curveball, also could return to the rotation after missing all of last season. Another senior, Dimitri Kourtis (5-1, 1.15 with five saves), is back to anchor the bullpen, and Ben Lumsden (2-3, 2.16) should be a valuable setup man. The crafty Kourtis can vary his arm slots and keep hitters off balance by mixing four pitches effectively. The lineup is led by 2B Devin Bonin (.284/0/14), C Charlie Madden (.269/3/22), and OFs Nate Moorhouse (.281/2/11), and Kyle Lewis (.281/2/17). The physical 6-foot-4 Lewis is a pick to click; he has easy bat speed and could be ready to start tapping into his raw power potential. Freshman OF Trey Truitt and sophomore SS Matt Meeder (.259/0/9) are also players to watch for this team, but the Bears will sorely miss departed mainstays Chesny Young, Nick Backlund and Michael Massi.

• UNC Greensboro coach Link Jarrett appears to have the Spartans headed in the right direction. 2B Hunter King (.382/3/46), 1B Eric Kalbfleisch (.317/5/26), and OFs Tyler Long (.298/1/15), and Zac MacAneney (.325/2/21) are all returning starters in a lineup that should be very potent. Freshman Tripp Shelton looks like a difference maker who will start at shortstop right away. RHP Ryan Clark (3-6, 3.68) has seen his velocity climb and can now reach the mid-90s heater with feel for three secondary pitches, making him the SoCon’s top prospect. JC transfer RHP Keaton Haack, a 6-foot-4 bounceback from Alabama who works downhill with a low-90s fastball and a good changeup, could be the No. 2 starter. Brennen James (1-2, 4.28), transfer Julian Abreu, freshman Bryant Stafford, and Tyler Frazier (1-3, 2.28) provide depth.

• East Tennessee State, another newcomer from the Atlantic Sun, has an athletic lineup and one of the league’s best rotations. Look for 2B Trey York (.231/1/17), 3B Chris Cook (.269/1/14), and 1B Kevin Phillips (.261/3/33) to all make big jumps in production this spring. York, a plus-plus runner with good defensive skills in the middle infield, has the most raw talent on the club and should cut down his strikeout rate as a junior. Phillips has also worked hard to refine his approach, using the right-center gap more often in the fall. He and Cook will be counted upon to provide some pop in the middle of the lineup. DH Andrew Lasure (.275/1/9), OF Jeremy Taylor (.277/3/27) and freshman OF Aaron Maher are also expected to make key contributions. Taylor may be the team’s best prospect, a blazing-fast runner who plays stellar defense in center field and wreak havoc on the basepaths. The rotation will be anchored by RHP Griffin Krieg (3-3, 3.27), who can run his lively fastball up to 93 and mixes in an adequate breaking ball and very good changeup. Injuries plagued him last year, and he struggled with his command when he was healthy, but he looks poised for a breakout junior year. Veteran Jimmy Nesselt (7-5/4.06), a strike-thrower whose velocity climbed into the high 80s this fall, should pitch on Saturdays, while crafty LHP Jamin McCann (5-4/4.78) and JC transfer Lee Haeberle will compete for the Sunday job. Dillon Cate, who missed 2014 with Tommy John surgery, has the best slider on the staff and should assume the closer role. Big-bodied freshman Ryan Simpler has intriguing upside and could grow into a key role as he matures.