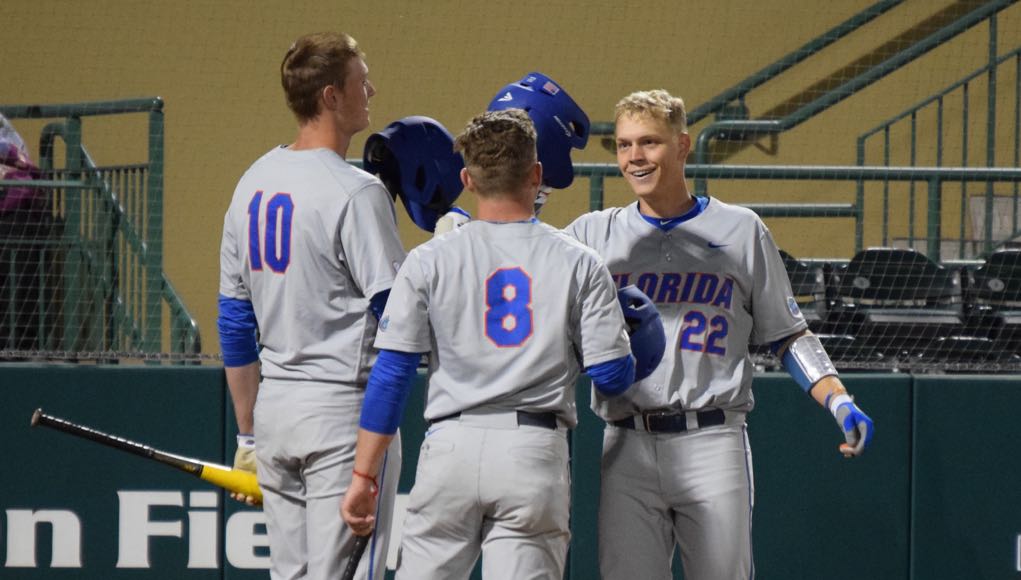 CHAT: Submit a question to Fitt/Rogers

Florida took over the top spot in the D1Baseball Top 25 rankings, as preseason No. 1 Vanderbilt’s run at the top came to an end. The Commodores went 1-2 in the Dodger Stadium College Baseball Classic and fell four spots to No. 5. The Gators went 4-1 on the week, splitting a pair of midweek games against No. 9 UCF and allowing just four runs in a three-game sweep of Maine to improve to 14-2 on the season.

TCU jumped from No. 6 to No. 2 after a 3-1 week that included wins over No. 10 Rice, then-No. 4 UCLA and then-No. 1 Vanderbilt. The Bruins tumbled 10 spots to No. 14 after going 0-3 at the Dodger Stadium tournament. Southern California was the big surprise of that event, going 3-0 with wins against TCU, Vandy and UCLA. The Trojans, who also have single wins against Cal State Fullerton, Kentucky and Fresno State on their resume, improved to 15-1 and debuted in the rankings at No. 13.

The two teams that went undefeated at the Houston College Classic also made moves up the rankings. LSU (15-1) climbed three spots to No. 4 after a 5-0 week that included wins against Houston, Baylor and Nebraska at Minute Maid Park. And the nation’s last remaining unbeaten team, Texas A&M (16-0), jumped eight spots to No. 6 after beating Dallas Baptist, Nebraska, Houston and Baylor in the last week.

Three teams joined the rankings in addition to USC, as Miami, Oklahoma State, Ole Miss and Tulane dropped out. Illinois returned to the Top 25 at No. 19 after winning a road series at Oklahoma State. Florida State (No. 21) also returned to the rankings after a 5-0 week that extended its winning streak to nine games. Cal State Fullerton (No. 23) re-entered the rankings after sweeping then-No. 13 Texas Tech to run its winning streak to seven games—a streak that includes sweeps over two Big 12 teams (Baylor is the other).