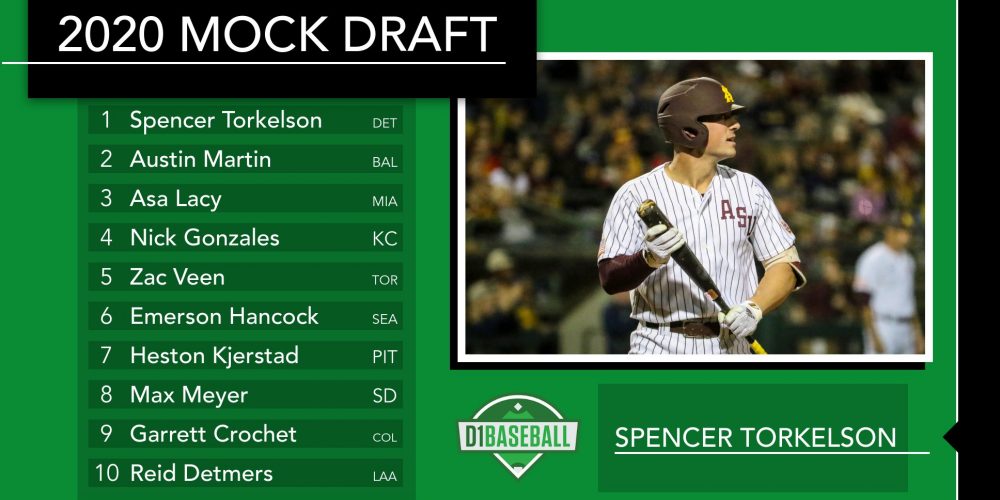 We’re less than 48 hours out from the 2020 MLB Draft. Here’s the latest on what we’re hearing and forecasting. We’ll make any necessary updates on Wednesday.

1. Tigers: 1B Spencer Torkelson (Arizona State) has long been pegged for this spot. 3B Austin Martin (Vanderbilt) and LHP Asa Lacy (Texas A&M) are worthy of this pick, but we’ll stick with Tork until convinced otherwise. PICK: Spencer Torkelson

2. Orioles: Baltimore has the top bonus pool, putting them in the best spot to get creative—something GM Mike Elias hasn’t shied away from in the past. Thus the rumor of OF Zac Veen (Spruce Creek HS, FL) going here. It wouldn’t be totally surprising, but it still feels like Martin or Lacy is more likely. PICK: Austin Martin

3. Marlins: If Torkelson and Martin are gone, Lacy is the best available prospect. PICK: Asa Lacy

4. Royals: Before 2019, the Royals hadn’t picked in the top 10 since 2013—when they took Hunter Dozier high to save money and later jumped on Sean Manaea. They have the bonus pool and picks to do something like that again and like the Orioles, Veen would fit that scenario. But imagine a middle infield with 2B Nick Gonzales (New Mexico State) and their top pick last year, SS Bobby Witt. PICK: Nick Gonzales

5. Blue Jays: RHPs Max Meyer (Minnesota) or Emerson Hancock (Georgia) would be the best overall talent available at this point, but if Toronto wants a bat, Veen is the guy. PICK: Zac Veen

6. Mariners: Seattle has gone the college route the last four years, which would put them on Meyer and Hancock, the latter fitting the traditional pitching prospect mold a little more. PICK: Emerson Hancock

7. Pirates: Pittsburgh has gambled on upside in recent years, so RHP Mick Abel (Jesuit HS, OR) would be in play, but they have a new GM who might not be so willing to roll the dice right now. We’ve heard them tied to one of the top college bats in OF Heston Kjerstad (Arkansas), as well as C Patrick Bailey (North Carolina State). PICK: Heston Kjerstad

8. Padres: Speaking of gambling on upside, San Diego isn’t timid either. This would be the floor for Veen. Abel is an option. But Meyer offers an intriguing mix of high ceiling, but high floor as well. PICK: Max Meyer

9. Rockies: LHP Reid Detmers (Louisville) has a high floor and plus curveball, but he does give up a lot of fly ball contact, which isn’t ideal in an environment like Coors Field. OF Pete Crow-Armstrong (Harvard-Westlake HS, CA) has been mentioned here. LHP Garrett Crochet (Tennessee) was banged up this spring, but he has some of the best pure stuff in the class with a sinking fastball, a much better match for high altitude. PICK: Garrett Crochet

10. Angels: Detmers would give the Angels a close-to-the-big-leagues, middle-of-the-rotation southpaw. PICK: Reid Detmers

11. White Sox: Chicago has been very heavy on college picks the last several years and Bailey makes the most sense. PICK: Patrick Bailey

12. Reds: If Bailey somehow made it to here, he’d be an option. OF Robert Hassell (Independence HS, TN) is the best pure hitter among high school prospects, though he could also find his way into the top 10. PICK: Robert Hassell

13. Giants: Again, Bailey if he got this far. We’ve also heard San Francisco tied to 2B Justin Foscue (Mississippi State) and C Tyler Soderstrom (Turlock HS, CA). OF Garrett Mitchell (UCLA) could slide because of his diabetes, but he has the tools of a top 10 pick. PICK: Garrett Mitchell

14. Rangers: This is where things might start to get really interesting. Texas loves upside and could get an in-state prospect in RHP Jared Kelley (Refugio HS, TX). Abel is about as projectable as they come and has been pumping some upper-90s gas in bullpens during the shutdown. PICK: Mick Abel

15. Phillies: There is a group of high school prospects in this range that would fit. SS Ed Howard (Mount Carmel HS, IL) didn’t get the spring to answer questions about his bat and would be a steal here in our minds, but he could slide further too. OF Austin Hendrick (West Allegheny HS, PA) didn’t get a spring season either and showed some swing-and-miss tendencies last season. But his power at Citizens Bank Park and that lineup…bash brothers of the 21st century anyone? PICK: Austin Hendrick

16. Cubs: If you believe in the defense, C Austin Wells (Arizona) is a mid-first-round pick. If you don’t, he slips a little farther. PICK: Austin Wells

17. Red Sox: Boston has had good luck with left-handed hitting outfielders in the draft (see Jacoby Ellsbury, Jackie Bradley Jr. and Andrew Benintendi). He could go well before this, but Crow-Armstrong fits that mold. PICK: Pete Crow-Armstrong

18. Diamondbacks: Arizona got a couple high-upside arms in Brennan Malone and Blake Walston last year—then traded Malone to the Pirates. They’ve got an extra pick in 2020 so how about another? Kelley flirts with triple digits and has a plus changeup. PICK: Jared Kelley

19. Mets: The Mets have gone after some top hitters the last couple years and Foscue could be in the mix. We’ve also heard them tied to RHP Cade Cavalli (Oklahoma). PICK: Cade Cavalli

20. Brewers: If a high schooler were to fall here, like Abel, Bitsko, Crow-Armstrong, etc., they could be in play. Soderstrom could go way before this. PICK: Tyler Soderstrom

21. Cardinals: RHP Cole Wilcox (Georgia) is about as intimidating as they come. He’s reportedly pushing 6-foot-5, 250 pounds and has the stuff to match. If nobody goes after him now, he could be a top 10 pick next year. PICK: Cole Wilcox

22. Nationals: Washington has jumped on injured arms in the first round in the past and there’s one in particular that fits perfectly in this area—RHP J.T. Ginn (Mississippi State). PICK: J.T. Ginn

23. Indians: Cleveland hasn’t taken a college player with their first pick since 2014 and you can usually bank on them snagging a guy that slipped. The thought of Howard getting this far is hard to wrap your head around, but it’s possible. RHP Tanner Witt (Episcopal HS, TX) was thought to be a tough sign, but his name has been mentioned a few times in the first round. PICK: Ed Howard

24. Rays: RHP Nick Bitsko (Central Bucks East HS, PA) is the wild card of this draft. He could anywhere from the middle of the first to Competitive Balance Round A. We’ll slot him with the Rays for now. PICK: Nick Bitsko

25. Braves: If Wilcox got this far, you could argue the mantra “don’t get beat in your backyard” for Atlanta, but he would probably eat up most, if not all, of their pool. Just a couple hours southwest of SunTrust is RHP Tanner Burns (Auburn). There’s also a little talk of RHP Justin Lange (Llano HS, TX) here, which would save them some money but also give them a high-octane arm. PICK: Tanner Burns

26. Athletics: Going into the year, there was no chance RHP Carmen Mlodzinski (South Carolina) would get this far. A slow start to the season pushed him down boards and Oakland would do well to snag him. PICK: Carmen Mlodzinski

27. Twins: Foscue is one of the top hitters in the draft and a strong athlete. If he doesn’t go to one of the rumored teams above, Minnesota is a landing option. SS Nick Loftin (Baylor) is also a possibility. PICK: Justin Foscue

28. Yankees: New York has the second-smallest draft pool, next to the Astros, and they have just three picks in the entire draft. Worst case scenario, C Dillon Dingler (Ohio State) is a big league backup, but his athleticism, defensive skills and feel for the strike zone means he could be a solid everyday player. PICK: Dillon Dingler

29. Dodgers: Thanks to a trade that netted a pick in Competitive Balance Round B, Los Angeles has a little more money to play with than others at the bottom of the first round. There are a few guys they could steal if they fell. Wilcox would command a big bonus, but it might not be impossible here. A high-floor hitter, like Loftin, would also fit. PICK: Nick Loftin