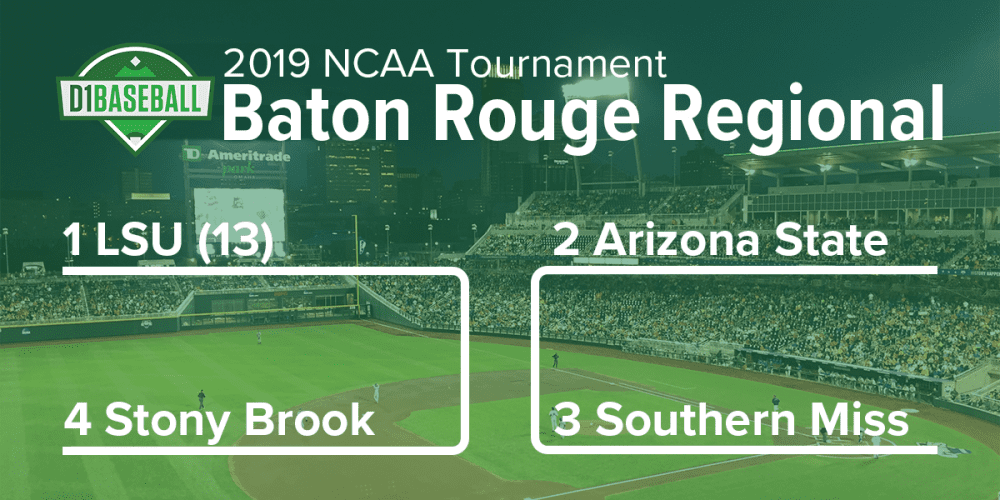 LSU went on a nice run at the SEC tournament that propelled it to a regional host. Now, the Tigers have the tough chore of facing hard-hitting Arizona State, surging Southern Miss and old nemesis Stony Brook in what should be a terrific tournament in Baton Rouge.

Bishop has taken his game to another level this season, and has developed into one of the nation’s premier players. Though his batting average is down from where it was earlier this season, Bishop still has an impressive 1.238 OPS and leads the Devils in home runs with 22. Bishop also is an athletic baserunner and strong defender in the outfield.

Few hitters in college baseball command the attention that Torkelson does when he steps to the plate. Torkelson is a hair behind Bishop in some important offensive categories, but for me, is still the most feared slugger in this lineup for good reason. Tork has 21 home runs and has just one more strikeout than he does walks (41 vs. 40). With the weather expected to be hot and not as humid as usual in Baton Rouge, it’s perfect conditions for the slugger to have a big weekend.

The Sun Devils are solid up thee middle and the emergence of Williams is a big reason for that. Williams, who has a .965 fielding percentage, has been very smooth and instinctual at the position throughout the season. He’s been Mr. Steady for the Sun Devils. For me, he and LSU’s Josh Smith are the two premier defenders in this regional.

If you’re looking for incredible pitching, the Baton Rouge Regional might not be for you with a plethora of hard-hitting clubs. But Marsh is the heartbeat of this ASU pitching staff. Marsh attacks hitters with a fastball ranging 90-94 mph, and can get up to 95 on occasion. He also has a nasty slider. With that said, Marsh has historically been much better at home than on the road. Will that trend continue at The Box? We’ll find out.

I was almost inclined to pick Southern Miss slugger Matt Wallner for this. After all, he went bonkers offensively at the Conference USA tournament. However, the Tigers desperately need a strong weekend from Smith to get the job done offensively. Smith sits atop the LSU lineup, has a mature approach and has big-time power in what is hardly an imposing frame. He’s the straw that stirs LSU’s drink, as they say.

With LSU freshman righty Cole Henry still working his way back into the mix, I think we lean the Golden Eagles here. The guy to watch is young Gabe Shephard, who showed outstanding stuff at last week’s Conference USA tournament. Walker Powell has had a terrific season and commands the zone well, while Steve Powers, too, does a great job of throwing strikes.

The bullpens in this regional certainly are nothing special, but the Tigers do have some high-quality arms to watch. Matthew Beck has a big-time breaking ball and has tallied solid numbers this spring, Todd Peterson is an ultra-confident righty who can get into the mid-90s with good stuff and Devin Fontenot is another low-to-mid 90s righty with good stuff. The bullpen, though, revolves around hard-throwing righty Zack Hess, who gives the Tigers a new level of swagger when he enters the game.

With the weather expected to hot and potentially windy this weekend in Baton Rouge, the Sun Devils might just be licking their chops. ASU ranks No. 1 nationally in home runs per game with 1.70, while it ranks 12th nationally in team batting average with a .307 clip. The big question is how will the Devils perform away from home.

While the Tigers might not have a premier backstop like they’ve had in the past, they do have several outstanding defenders in the field. Shortstop Josh Smith is as good as it gets up the middle, Brandt Broussard is a solid defender and Hal Hughes does a good job on the left side. LSU also has a good defensive outfield with Daniel Cabrera and speedsters Zach Watson and Antoine Duplantis leading the charge.

It’s LSU and the Tigers are at home at Alex Box Stadium this weekend. That in itself makes LSU the clear favorite going into the weekend. However, LSU’s pitching has been bad at times this season and that gives me at least some pause against a hard-hitting team like Arizona State, a hot team like Southern Miss and of course, pesky Stony Brook.

The Tigers needed to have a strong showing in the SEC tournament to host a regional, and they did just that, capping it all off with a blowout win over Mississippi State. Now the Tigers return home and hope to get some strong pitching from a staff that has been very much up and down throughout the season.