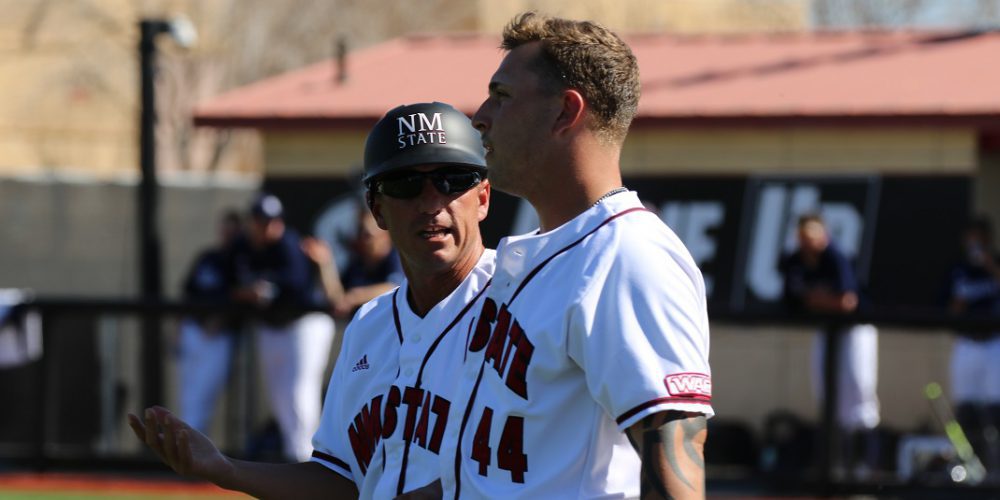 
WACO, Texas — After dropping the opener of the extremely alliterative Baylor Baseball Battle to San Diego, New Mexico State edged host Baylor 9-5 in a rain-soaked nightcap. The doubleheader split brought the Aggies to 9-7 on the year, and the win came at the expense of another rebuilding club, as the Bears fell under .500 under first-year coach Steve Rodriguez.

But calling what New Mexico State is doing a rebuild really undersells the job head coach Brian Green is doing. It’s like calling Hadrian’s Wall a fence built to keep the neighbors out of sight.

For the 2016 season, Green brought in 31 new players. No, that is not a misprint. Thirty-one players, including 25 junior college transfers. Green took over an older Aggies team last year, and suffered a level of attrition that brings to mind that apocryphal adage about the Chinese words for crisis and opportunity being the same.

“In terms of a turnaround, just having 16 seniors, that enabled us to make a change quicker than normal,” Green said. “With the amount of new players that we have, the focus has been entirely on culture.”

“We were really honest up front—here’s the plan, here’s the vision for the program, here’s what we plan and intend on doing,” Green said. “Everybody knew who was coming in, and we told them exactly who was. We were very open about it, we didn’t hide anything, and people wanted to be a part of it.”

Being able to count his returning players on one hand also allowed Green to pitch an open competition for pretty much every job on the roster.

“This is like Year One in Year Two with such a new team. But fall practice was very competitive,” Green said. “Jobs were wide open for everybody, obviously, and the culture, the feeling, the excitement, the work ethic, it was really positive.”

And so far, the results have been worth feeling positive about. Playing the WAC, New Mexico State’s nonconference schedule is the toughest part of the year—the Aggies play only six games against power-five conference teams all year, and they’ll have five of those games wrapped up by Tuesday. Even if that weren’t the case, being 9-7 right now would be a welcome change for a team that went 11-38-1 last year and hasn’t recorded a winning season since 2012.

“Our guys play hard,” Green said. “We’ve been in just about every game except the second game at Tech. Every game has been tight, they fight, they play hard, they believe, and they have high expectations, so it’s been fun.”

That said, Green is still getting to know his team, and he’s still tinkering with his lineup and the order of his pitching staff.

“We’re getting closer,” Green said. “We’ve still got a couple of guys we expect to see on the mound here in two or three weeks, but we’re looking like we’re starting to establish some roles in terms of having a left-handed arm lineup, a right-handed arm lineup.”

It requires a lot of active managing, which means that while Green was all smiles when talking about his team—even after a grueling day that included two games and two rain delays and ended after midnight local time—he’s looking forward to a little more stability in years to come.

“It was obviously something you don’t see very often,” he said, “and we certainly don’t plan on doing it again.”

• Baylor DH Cameron Miller was 0-for-7 on the season coming into this game, but he got the start and made it count, going 2-for-3 with a walk and a game-tying single to left field in Baylor’s seventh-inning rally.

• A game delayed at the start by about 30 minutes was set back another hour and 42 minutes by a third-inning rain delay that turned the outfield into a bog, as runoff from the tarp created several noticeable pools of water in the outfield. In the fourth inning, Miller looped a Texas leaguer into one of those pools, and New Mexico State left fielder Austin Botello committed to what can only be described as a failed naval expedition. He failed to pick up the ball cleanly, allowing runner Aaron Dodson to advance for one error, then, when he attempted to throw the slick, waterlogged baseball to second base, he missed his man, and indeed, the whole infield. Miller ran to second base and Botello was charged with a second error. Fortunately for the junior outfielder, Baylor did not score a run in the inning.

• Botello wasn’t the only player with a credible grievance against the rain. Baylor lefthander Daniel Castano looked very good in the early going, tying his career high of six strikeouts with two out in the third inning, then tacking on two more after the delay. Castano worked some deep counts, and didn’t look as sharp after he’d sat for so long, but most impressive was his curveball, which he threw for strikes and as a chase pitch. On several occasions he threw it inside to left-handed hitters and got the batter to flinch before the pitch spun back over the corner for a strike. Castano faltered and allowed two runs in the fourth and three more in the fifth, but the first time through the order he was nearly unhittable.

• One of those fifth-inning runs came courtesy of a beautiful piece of directional hitting by Aggies shortstop L.J. Hatch. As Castano came set, Baylor second baseman Justin Arrington sneaked in behind Jaron Balman, who was at second base. Hatch poked the ensuing pitch just to the left of Arrington, who’d left a hole on the right side and was moving the wrong direction, and Balman scored.