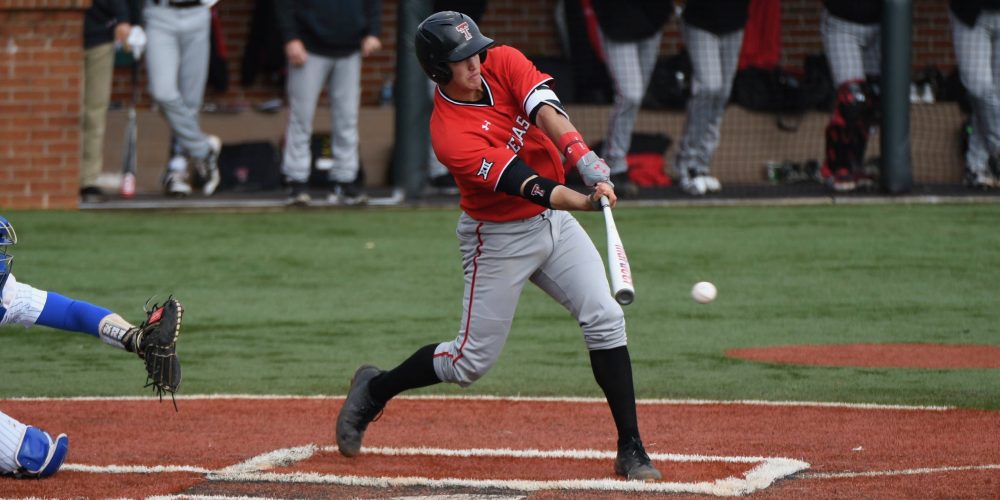 Langeliers had an outstanding career for the Bears. He was one of the nation’s premier defensive catchers, and had some impressive offensive production to go along with it. Langeliers made a statement as a freshman with a .313 average, 10 home runs and 38 RBIs, before still slugging 11 home runs as a sophomore despite an injury. He finished his career with a bang by hitting .332 with 13 home runs and 53 RBIs. Langeliers was one of several BU players who got the program back on track.

Clemens had one of the most impressive one-year improvements in college baseball history. He hit .242 and .241, respectively, his first two seasons before going insane and being a National Player of the Year finalist as a junior. That year, Clemens hit .351 with 15 doubles, three triples, 24 home runs and 72 RBIs, along with a strong 1.170 OPS. Clemens also was a strong defender up the middle. Finally, he helped lead the Longhorns to the College World Series as a junior.

Texas Tech has developed into one of the nation’s premier programs and Jung’s ascension is a big reason for that. He had three outstanding seasons with Tim Tadlock’s Red Raiders. Jung hit .306 with six home runs and 43 RBIs as a freshman before hitting .392 with 12 home runs and 80 RBIs as a sophomore, also sporting a 1.130 OPS. Finally, his junior season ended with yet another trip to Omaha, this time hitting .342 with 22 doubles, 14 home runs and 56 RBIs, along with a 1.112 OPS.

Neuse had three strong seasons with the Sooners. He hit .304 with 17 doubles, a whopping seven triples, seven home runs and 47 RBIs as a freshman before hitting six home runs and 43 RBIs as a sophomore. He, like many others, made yet another statement as a junior, hitting .369 with 15 doubles, five triples, 10 home runs and 48 RBIs. Neuse also made contributions on the mound for the Sooners.

One of the more consistent hitters in the Longhorns’ modern era, Payton had a career to remember both from a production and leadership standpoint. He hit .263 with 11 doubles as a freshman before hitting .322, .393 and .315 his final three seasons with the program. He had 12 triples his final two seasons, while also ending the 2013 campaign with an impressive 1.028 OPS. Payton helped guide the Longhorns to a CWS berth in 2014.

Martini’s legacy in Manhattan will live on for a long time. Before his arrival, Kansas State had never reached the NCAA tournament. However, they made the tourney in all three seasons he was on campus, with the only other NCAA berth coming a few years later. In 2010, Martini hit a whopping .416 with 17 doubles, four triples, four home runs and 59 RBIs, while hitting .326 with 15 doubles and four triples the next season. He also totaled 62 stolen bases in his KSU career and was a solid defender.

Naquin, like some others on this list, didn’t have a terrific freshman campaign, but his sophomore and junior seasons were mighty impressive. Naquin hit .381 as a sophomore with 23 doubles, seven triples and 44 RBIs, along with six stolen bases. Then, the eventual Big Leaguer as a junior, hit .380 with 18 doubles, six triples, three home runs and 49 RBIs. He also finished the season with a whopping 21 stolen bases. In addition to his offensive prowess, Naquin one of the best defenders and had one of the strongest arms in the league and college baseball.

Few players meant more to the TCU program during their tenures than Skoug. In addition to being a key hitter for the Frogs, he also was the heartbeat of the team. Skoug had a solid career offensively for TCU, hitting seven home runs and knocking in 46 runs as a freshman before hitting .301 with 21 doubles, nine home runs and 51 RBIs as a sophomore. Finally, as a junior, Skoug hit 20 home runs and knocked in 70 runs. Skoug helped TCU form into an Omaha mainstay.

He was one of the nation’s most feared hitters for three seasons and will go down as one of the best ever in TCU history. Baker pitched 47.2 innings in 2016, but his biggest contributions were at the plate. That season, Baker hit .379 with 16 doubles, 11 home runs and 62 RBIs. Then, as a sophomore, Baker hit .317 with eight doubles, eight home runs and 41 RBIs, before hitting .319 with two doubles, nine home runs and 26 RBIs as a junior. Baker battled injuries his final two seasons, but still managed to produce at a high level. TCU reached the CWS in two of his three seasons.

Speaking of college baseball success stories, it doesn’t get much better than the crafty TCU righthander. Morrison arrived in Fort Worth as a walk-on and left a TCU legend, perhaps the best starting pitcher in program history. Morrison had insane numbers his four seasons with the Horned Frogs, tallying ERAs of 2.08, 1.51, 1.32 and 2.51, while also showing immaculate command and helping guide the program to two College World Series appearances.

Manoah had a junior campaign to remember for the Mountaineers, leading the program to its first-ever postseason Regional host. Manoah, a stocky righthander, tallied ERAs of 3.07 and 4 his first two seasons. But it’s his junior campaign that puts him over the top, tallying a 2.08 ERA in 108.1 innings, along with 144 strikeouts and 27 walks. In addition to his production on the mound, Manoah had an infectious personality and was the heart and soul of the WVU program.

* Note: Tyler Naquin and Michael Wacha only played in the Big 12 (not the SEC)