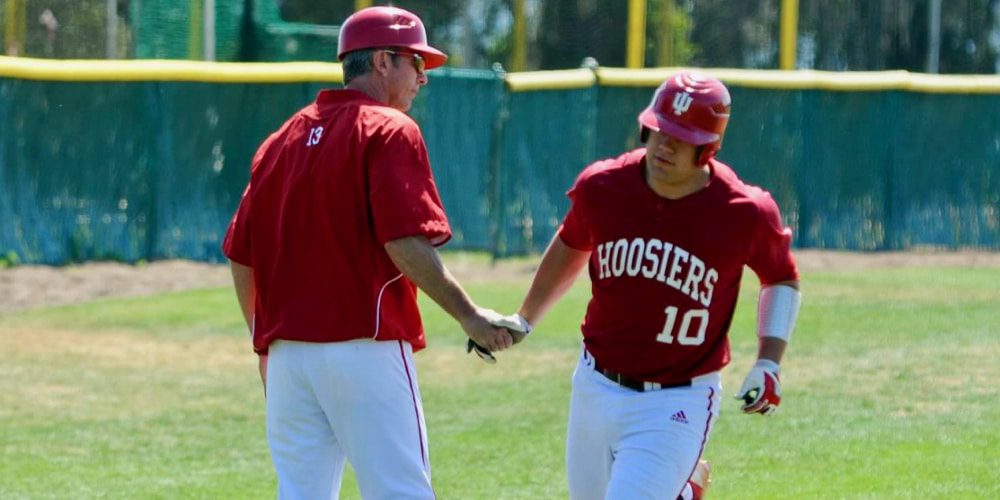 As part of our series looking back on the last decade, we unveiled an All-Decade team for all of college baseball last week — but we’ve also assembled All-Decade Teams for each of the power conferences. For this exercise, we tried to balance peak value with career value and bonuses for postseason legacy, taking into account the very different offensive eras that divided the decade (offensive numbers were dramatically depressed when the BBCOR bat standard took effect in 2011, and offense didn’t start to pick up again until the flat-seam ball was introduced in 2015).

Without further ado, here’s our list of All-Teens Team for the Big Ten. Indiana leads the way with five selections, followed by Illinois with three:

Kyle Schwarber might seem like the most obvious name for this spot, but Plawecki was the far superior defender, and Schwarber saw enough action in left field to allow us to move him to the outfield on this team. And Plawecki put up outstanding offensive numbers in his own right, hitting .341 or better three years in a row and earning second-team All-America honors as a junior, when he hit .359/.445/.578 with 20 doubles and seven homers in the dead-offense era. He was a first-round pick by the Mets that June and is still playing in the big leagues.

Travis and Schwarber formed a fearsome pair of Bash Brothers for three years, hitting for power during college baseball’s least offensive era since the wood-bat days of the 1970s. Travis was a model of consistency, posting OPS marks of .906, .964 and .991 in his three years. He hit for both average and power in all three seasons, earning second-team All-America honors for Indiana’s national seed club in 2014 and then getting drafted in the second round by the Red Sox, for whom he reached the big leagues.

Lowe only played in the Big Ten for one season, as Maryland was still in the ACC when he earned Freshman All-America honors in 2014. But he sure made his time in the Big Ten count, hitting .331/.436/.542 with nine doubles and 18 homers to snag second-team All-America honors and help lead the Terps to their second straight super regional. He was a third-round pick as a draft-eligible sophomore in 2015 and became a major league all-star in 2019.

One of the key unsung heroes of Indiana’s rise to national prominence, DeMuth was a dynamic hitting machine who earned back-to-back All-America honors in 2013-14, posting a .978 OPS with 24 doubles as a junior and a .980 OPS as a senior, when he snagged first-team honors. He also hit .360 as a full-time player during his freshman year in 2011.

Vavra hit for average and played standout defense for three years, helping to lead the Gophers to regionals in 2016 and super regionals in 2018. A career .351 hitter, Vavra’s power numbers spiked during his first-team All-America campaign in 2018, when he hit .386/.455/.614 with 10 long balls and 59 RBIs. That got him drafted in the third round by the Rockies.

A premium athlete, Dawson was one of the Big Ten’s most exciting power/speed players over the last decade. He was a productive hitter for three years, hitting .337/.396/.454 to earn Freshman All-America honors in 2014, then increasing his homer and stolen base totals each of the next two years. His best season was his junior year in 2016, when he hit .331/.419/.611 with 13 homers and 21 stolen bases to earn second-team All-America honors and lead the Buckeyes to regionals for the first time in seven years.

Dickerson was one of the best freshman sluggers in the country in 2009, and he continued to mash during the first two years of the new decade. He put up eye-popping numbers as a sophomore, smashing 24 homers and hitting .419/.479/.805 with 19 doubles and 75 RBIs. His power numbers dipped in the first year of the BBCOR era in 2011, but he still hit nine homers, posted a .980 OPS, and hit for average (.367).

One of the most fearsome and accomplished sluggers of the early BBCOR era, Schwarber played both catcher and left field for the Hoosiers, but his big bat was his calling card. After hitting .300/.390/.513 with eight homers as a freshman, he posted back-to-back All-America campaigns for Indiana’s 2013 Omaha team and its 2014 national seed club. He ranked third in the nation with 18 home runs as a sophomore, when he hit .366/.456/.647. Then he posted a career-best 1.123 OPS to earn first-team All-America honors as a junior. He was also a patient hitter who walked more than he struck out in each of his three seasons at IU. He was the No. 4 overall pick by the Cubs in 2014 and rocketed to the big leagues. 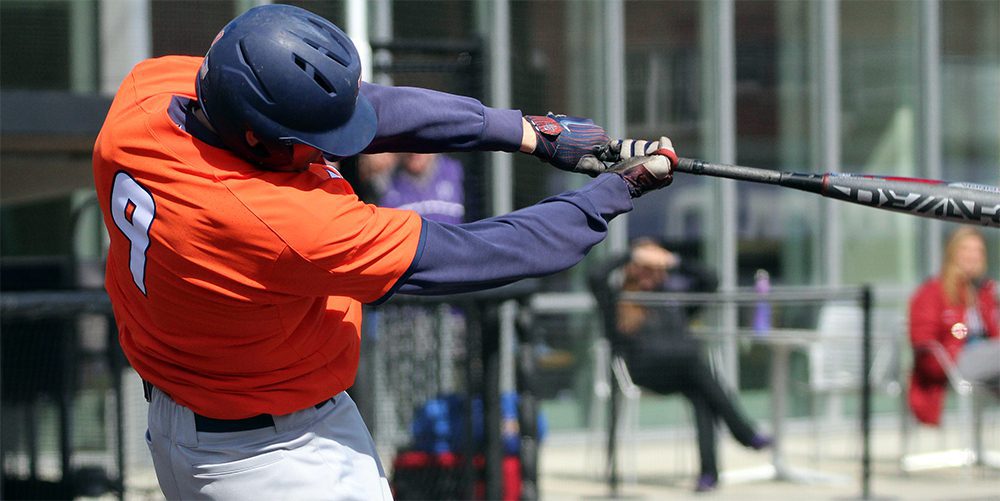 Former Iowa slugger Jake Adams (who hit 29 homers in his lone season at the Division I level) was also in the discussion for this spot, but Spillane’s OPS was 237 points higher in his first-team All-America campaign in 2018 than Adams’ OPS a year earlier. Spillane also provided decent production in 36 games as a sophomore, posting an .878 OPS … but he became one of the most dangerous sluggers in the nation a year later, when he led the nation in slugging percentage and home runs per game. Overall, he hit .389/.498/.903 (1.401 OPS) with 23 homers, 17 doubles and 60 RBIs — and he even swiped 16 bases in 16 tries.

Another polished, competitive lefthander, Duchene was a rock in the weekend rotation for three years, helping to lead the Illini to regionals in 2013 and 2015. He earned second-team All-America honors as a junior, when he went 11-2, 1.75 in 102.2 innings. But he was a model of consistency throughout his career, as evidenced by his sparkling career line of 24-4, 2.12. 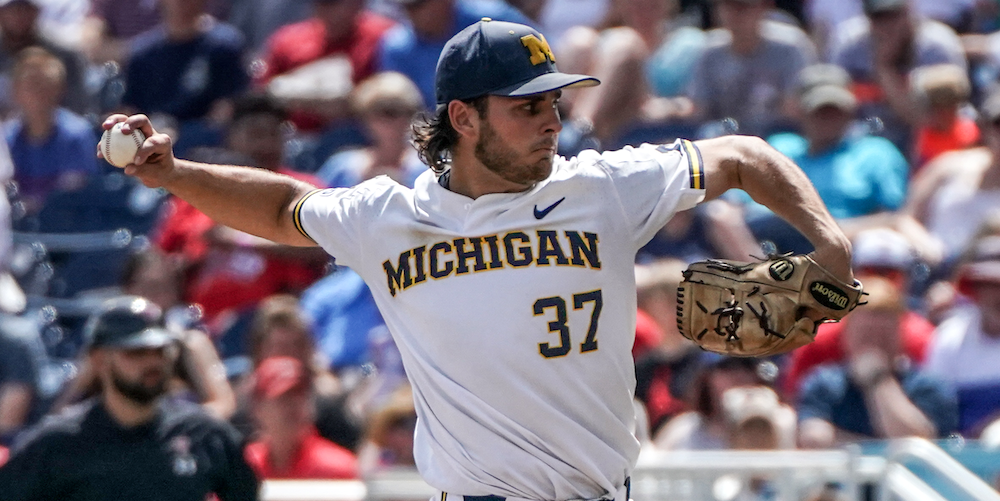 After starting his career in the bullpen, Kauffmann became a dependable weekend starter as a sophomore, going 6-3, 3.08. But he really made a name for himself as a junior, going 10-6, 2.59 and coming up huge repeatedly in the postseason. He played a huge role in leading Michigan to the CWS Finals, and his postseason excellence was a big reason he earned third-team All-America honors.

Shawaryn was a Freshman All-American in 2014, Maryland’s final year in the ACC, and he took the Big Ten by storm a year later, going 13-2, 1.71 with 138 strikeouts against 29 walks in 116 innings, earning second-team All-America honors and leading the Terrapins to their second straight super regional. He wasn’t as dominant in his junior year but still posted a solid 3.18 ERA in 99 innings. A fifth-round draft pick, Shawaryn made his big league debut in 2019.

One of the most electric lefthanders in Big Ten history, Jay posted a 1.68 career ERA in 128.2 innings over three seasons for the Illini, along with 143 strikeouts against 30 walks. After posting a 1.94 ERA with 10 saves as a sophomore, Jay earned Big Ten Pitcher of the Year honors a year later, going 5-2, 1.08 with 76 strikeouts and seven walks in 66.2 innings, along with 14 saves. He ranked third in the nation in ERA and second in WHIP, helping to lead the Illini to a 21-1 record in the Big Ten, a national seed and a trip to super regionals. He was the No. 6 overall pick in the draft that June.

Like Jay, Meyer has dazzled with his raw stuff for his first two collegiate seasons, blowing hitters away with mid-to-high-90s heat and one of the nation’s best sliders. That arsenal helped him post a 2.03 ERA, 16 saves, and a 54-13 K-BB mark in 43.2 innings as a freshman closer for a Minnesota club that hosted and won a regional. He split time between starting and relieving as a sophomore (when he also logged 121 at-bats), finishing the season 5-3, 2.11 with 87 strikeouts in 76.2 innings. He still has another season let in college baseball, but his legacy as one of the most dominant Big Ten pitchers of the 2010s is already secure.

Player of the Decade: Kyle Schwarber

Pitcher of the Decade: Joey DeNato

There’s plenty of competition for this honor. Former Indiana coach Tracy Smith has a good argument but only coached half the decade in the Big Ten. Minnesota’s John Anderson led his program to three regionals, three Big Ten titles and one super regional, while Erik Bakich took Michigan to three regionals and one memorable trip to the CWS Finals, but no conference titles. Our vote goes to Hartleb, who guided the Illini to four regionals, two Big Ten titles and one super regional. Illinois’ 2015 season was one of the best in Big Ten history, as Hartleb’s club went 21-1 in the conference, 50-10-1 overall, earned a national seed and advanced to super regionals, where they were beaten by eventual national champion Vanderbilt. Entering the decade, Illinois hadn’t been to a regional since 2000, but Hartleb turned the program into a regular contender in the teens.

Program of the Decade: Indiana

Three different coaches — Tracy Smith, Chris Lemonis and Jeff Mercer — held the reins for the Hoosiers in the teens, and they just kept on winning. Indiana led all Big Ten programs with six trips to regionals in the decade and tied Minnesota with three conference championships. In 2013, Indiana became the first Big Ten program since 1984 to reach the College World Series, and a year later the Hoosiers went 21-3 in the conference and earned a national seed. Mercer led the Hoosiers back to the top of the league standings in 2019.

Team of the Decade: 2013 Indiana Hoosiers

As good as the 2014 Hoosiers and 2015 Illini were, this competition ultimately comes down to the two Big Ten teams that went to Omaha in the decade: the 2013 Hoosiers and the 2019 Michigan Wolverines. That Michigan run to the CWS Finals was magical, particularly since the Wolverines were on the brink of missing the NCAA tournament altogether if not for a thrilling comeback in the Big Ten tournament that led to a couple of huge wins, bolstering Michigan’s fringy at-large case. But the 2013 Hoosiers were a better club from start to finish, winning the conference championship with a 17-7 regular season, then reaching the finals of the conference tournament, then breezing through a home regional, then taking down mighty Florida State in Tallahassee in supers. The 2013 Hoosiers finished 49-16 overall and raised the bar for the entire conference.