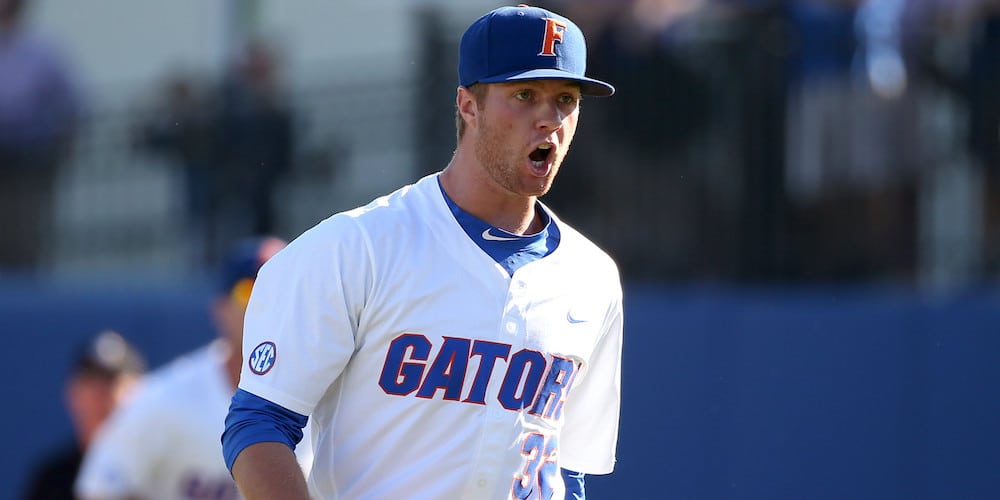 If not for someone named Adley Rutschman, Zunino would’ve been our starting catcher on the overall All-Decade Team. In addition to a wonderful career with the Gators, Zunino also guided the program to a pair of College World Series appearances and a runner-up finish in 2011. Zunino hit .371 and .322, respectively, his final two seasons with the Gators, while also slugging 19 homers and knocking in 67 runs in each of those two campaigns. Zunino also had OPSs of 1.116 and 1.063, respectively, in those two seasons.

The Gamecocks had an incredible beginning to the decade, and Walker was one of several sluggers who had careers to remember. Walker helped the Gamecocks to three-straight CWS appearances, along with back-to-back national titles. He also hit .327 with nine homers and 51 RBIs his first season before hitting .358 and .321, respectively, the final two seasons. In those two campaigns, he combined for 21 home runs and 115 RBIs.

Swanson had limited playing time as a freshman but busted on the scene in a big way as a sophomore for the Commodores. Swanson earned National Player of the Year honors during his career, while also helping guide Vandy to back-to-back CWS appearances, and of course, a national title in 2014. Swanson hit .333 with three home runs and 34 RBIs as a sophomore before hitting .335 with 15 home runs and 64 RBIs as a junior. Though most are aware of his prowess at shortstop, he also spent time at second base early in his career.

Everyone knows how talented Senzel is by his quick ascension to the Big Leagues, but how about his collegiate career with the Volunteers? Sure, Senzel didn’t guide the Vols to the postseason during his tenure, but it was hardly his fault. He did his part. Despite not having much of a supporting cast, he managed to have a great career, hitting .315, .325 and .352 in his two seasons. He totaled 13 home runs overall and 126 RBIs. Senzel reached a high-water mark for OPS (1.051) his junior season.

Bregman is having a wealth of success at the Big League level, but he got his start by being a generational talent during his time in Baton Rouge. Bregman, who could have easily caught during his LSU career, blossomed as one of the nation’s premier shortstops in his three seasons with the program. As a hitter, he helped lead LSU two a pair of CWS appearances. He hit .458 as a junior with nine home runs and 49 RBIs, along with a whopping 38 stolen bases.

The Razorbacks have had some absolute stars over the past decade, but Benintendi leads the charge. Benintendi had a solid first season with the Hogs, but it was his second season, which included a trip to Omaha, that puts him on this team. Benintendi had a season to remember, hitting .376 with 13 doubles, 20 home runs and 57 RBIs, along with 25 stolen bases and an impressive 1.205 OPS. Benintendi has carried that success over to the MLB ranks.

He’s become a legend not only in Starkville, but to an extent, around college baseball. From a national standpoint, Mangum’s legend was created with a combination of his success and his passionate plea for the future of the game in Omaha this past June. From a local standpoint, Mangum’s contributions extend both on and off the field. As a player, he was an exceptional defender and a consistent hitter. He became the SEC’s hit king this past season, while also hitting .408, .324, .351 and .355 in four seasons with the Bulldogs.

Tucker had a tremendous career with the Gators. In addition to making three-straight CWS appearances with the program, he also helped lead the program to a national runner-up finish in 2011. Tucker hit .364 with 15 home runs and 85 RBIs as a freshman before hitting .331 with 11 homers and 49 RBIs as a sophomore. He closed out his career with back-to-back double-digit home run campaigns, along with averages of .308 and .321, respectively. What. A. Career.

Rooker’s junior season was one for the ages, but he also put together quite an impressive overall career with the Bulldogs. Rooker had an OK freshman season before taking a sizable step forward as a sophomore, hitting .324 with 15 doubles, 11 home runs and 54 RBIs. But his biggest statement came in 2017 when he won the SEC Triple Crown, hitting .387 with 30 doubles, 23 home runs and 82 RBIs, while also having 18 stolen bases and a 1.305 OPS. Though he’ll be the first to tell you he is not a pitcher, Rooker did in fact make one pitching appearance at the SEC tournament.

The Wildcats only have seven NCAA tournament appearances in program history, and Reed was part of two of them. Reed had quite the career with the Wildcats, both on the mound and at the plate. As a slugger, he hit .300, .280 and .336, along with two incredible seasons to cap off his career, slugging 13 home runs and knocking in 52 in 2013 before hitting 23 homers and knocking in 73 runs in 2014. On the mound, Reed had a 2.52 ERA in 52.2 innings as a freshman, along with 51 strikeouts and nine walks. Meanwhile, he had a 2.09 ERA in 112 innings as a junior, striking out 71 and walking 29.

Like many premier pitchers, Nola certainly began his career in solid fashion, earning a high number of strikeouts in 89.2 innings as a freshman, but it’s his final two seasons that put him on this prestigious list. Nola had a 1.57 ERA in 126 innings, along with 122 strikeouts and 18 walks as a sophomore before wrapping up his LSU career with outstanding numbers, striking out 134, walking 27 and tallying a 1.47 ERA in 116.1 innings. Nola is one of the most decorated pitchers in LSU history, and that says something.

Yeah, it’s impossible to argue this one. Roth continues to be the headliner when someone mentions the “consummate college pitcher”. Roth had a 4.22 ERA in just 32 innings of work as a freshman before helping lead South Carolina to back-to-back national titles in 2010 and ’11, respectively. In those seasons, Roth had ERAs of 1.34 and 1.06, respectively, while also striking out a combined 147 and walking just 51. He finished his illustrious career with a 2.43 ERA in 137 innings as a senior for the Gamecocks. He’s a legend for a variety of reasons and that’ll never change.

The hard-nosed righthander helped the Gators become an Omaha mainstay and had an incredible amount of success in his three seasons with the program. Shore made a statement as a freshman with a 2.16 ERA in 95.2 innings, while also having a strong sophomore season with just 24 walks and a 2.72 ERA in 112.1 innings. He finished his career with a bang as a junior, going 12-1 with a 2.31 ERA in 105.1 innings, along with 96 strikeouts and 19 walks. Shore was Mr. Consistent during his career in Gainesville.

Fulmer arrived in Nashville with high expectations and had no trouble meeting them. He had three successful seasons, leading Vandy to its first national title in one while also helping the program to a national runner-up finish the next season. On the mound, Fulmer had a 2.39 ERA in 52.2 innings as a freshman before tallying a 1.98 ERA in 91 innings as a sophomore. He had a strong junior campaign, too, going 14-2 with a 1.83 ERA in 127 innings. He also struck out 167 and walked 50.

The all-time saves leader in Gators history, Byrne had a terrific career for Kevin O’Sullivan’s program. In addition to helping lead UF to its first national title, Byrne tallied impressive numbers. He made 13 appearances as a freshman and logged just 16 innings. However, he earned 19 saves as a sophomore with a 1.67 ERA in 75.2 innings – he also had 93 strikeouts. Then, as a junior, he had a 1.61 ERA and 16 saves in 61.1 innings – he also struck out 64 and walked just five.

Much like Roth, Price earned a stellar reputation during his time with the Gamecocks because of his hard-nosed approach. Price helped the Gamecocks to back-to-back national titles and had four successful seasons with the program. In the two seasons the Gamecocks won those national titles, Price had ERAs of 2.26 and 1.83, respectively, while also doing so with inning totals of 55.2 and 59. He also struck out 83 and 75, respectively, while earning 43 saves in his career.