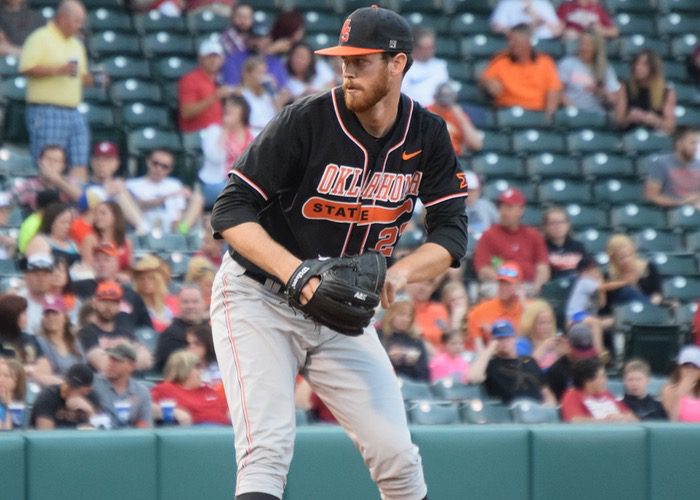 It might be fair to call the Big 12 Tournament simply the Tulsa Regional. That’s because six of the eight teams in the field likely need to win the tournament in order to make the NCAA Tournament. So it’s do-or-die for most of the Big 12. Is there a team not named TCU or Oklahoma State that could take the whole thing? We break it down:

About TCU And Oklahoma State

Again, both of these two teams are absolutely in the NCAA Tournament, and as of right now, both are projected to host with the Horned Frogs safely in as a national seed. And with an RPI of 13 and a 6-4 record against the RPI top 25, the Cowboys will probably end up as a host regardless of what they do as well.

Obviously, these two teams want to win each time they take the diamond. But the main priority for both clubs this week will be one thing: making sure the pitching staff is lined up for the postseason regional. It’s extremely unlikely that you’ll see either TCU or Oklahoma State really wear out their pitching staffs in order to stay alive in the Big 12 Tournament. That’s the luxury of a team handling its business in the regular season.

Big 12 likely to a three-bid league if …

Probably the only way the Big 12 get three teams into the postseason is if someone other than TCU or Oklahoma State wins the tournament. Take a look at the current RPI ratings for those other teams as we head into the conference tournament:

Maybe Oklahoma and Texas Tech are still on the committee’s board right now, but you can take it to the bank that the teams beyond those two on the list are not.

It’s possible that Texas Tech or Oklahoma could potentially make the tournament by reaching the conference championship game because it would likely push that RPI number into the 60’s, especially with any win over Oklahoma State or TCU. However, it’s still unlikely either would get into the dance without securing the automatic bid.

So the Big 12 will host a conference tournament that will include six teams playing to continue their season, and two teams playing to win on the condition that their pitching staffs aren’t sacrificed with postseason games looming.

The case for Oklahoma as the one team to watch

We know Oklahoma State and TCU are good. However, when you look at the list of teams that truly will be throwing and using everything at the tournament, Oklahoma is the most dangerous club.

In these types of settings, teams that are successful normally have two main things: quality pitching depth in the rotation and a few bats that can drive the ball out of the yard or take over a game.

Texas junior infielder C.J Hinojosa is one of the most talented hitters in the conference. However, Hinojosa, who has dealt with a nagging hand issue for much of the season, hasn’t produced, overall, like most expected. That’s changed some over recent weeks, though. 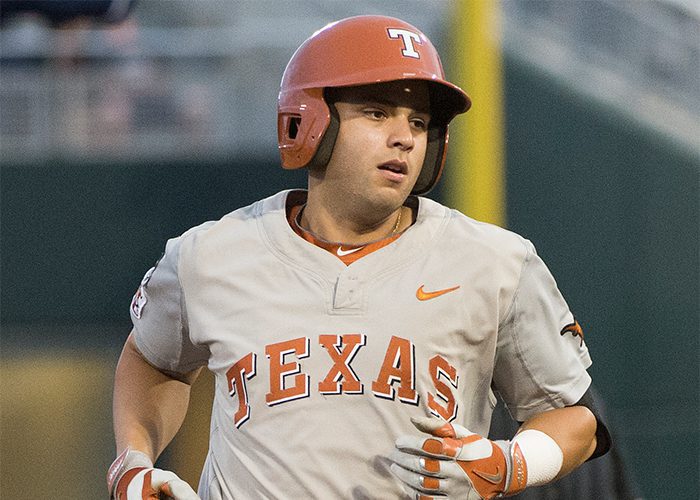 C.J. Hinojosa has struggled much of the season for UT, but is getting hot at the right time. (Texas)

In three games at Baylor this past weekend, Hinojosa blasted four homers and posted a silly slash line of .462/.533/1.385 in the three games, which resulted in a series win for Texas. The ridiculous finish to Big 12 play raised his OPS in league play to .945.

If Hinojosa produces even close to this, it makes the Texas lineup much, much different, especially as Tres Barrera has emerged recently and Ben Johnson has been outstanding the entire season. It would make Texas, which finished Big 12 play with the highest slugging percentage of any team in the conference, maybe the most dangerous lineup in the Big 12 Tournament because of the power presence throughout the middle of the order.

For the college fan that’s ready to settle in and watch a ton of Big 12 action this weekend, keep an eye on some of our favorite things after watching a lot of the Big 12 this season:

Joe Baker and Orlando Garcia’s gloves – Baker (Texas) and Garcia (Texas Tech) are two talented freshmen with the glove that can put on a show defensively thanks to their hands, instincts, and range.

Riley Ferrell’s stuff – It never gets old watching a reliever flirt with big-time velocity and snap off plus sliders around 90 MPH as long as you’re not the one in the batter’s box seeing it.

Ben Johnson’s effort – Johnson, who plays in the outfield for the Longhorns, is a former standout football player that brings that sort of fire and competitiveness to the diamond as well. Countless times this year his hustle out of the box has led to infield singles, or extra-base hits and his athleticism in the outfield has led to a spectacular play.

West Virginia’s Chad Donato– One of my favorite arms to watch this season, Donato really competes with a solid fastball and one of the better breaking balls I saw all season.

Oklahoma State’s Gage Green – He just always seems to be doing something to help his team win, which you could say about TCU’s Cody Jones too. Green can play multiple positions, and has a knack for finding a way on base, providing big hits, swiping a bag, putting down a bunt, and just making a lot of winning, competitive-types of plays.

〈
Previous Article Off The Top Of My Head: A Letter To The NCAA
Next Article West Coast Wrap: Week 14
〉