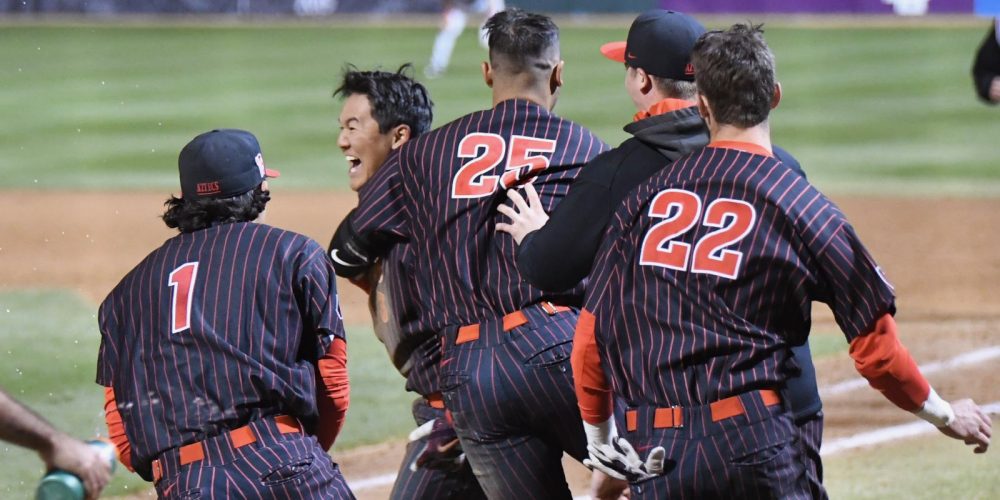 Aaron Fitt and Shotgun Spratling are in San Diego for the Tony Gwynn Legacy tournament. Below are reports stuffed with skinny on Cal Poly, San Diego State, San Diego, Arkansas and Arizona.

SAN DIEGO — Eight days into the season, San Diego State has the look of a dangerous postseason contender. The Aztecs opened the season with a loud three-game sweep of UC Santa Barbara last weekend, and they opened the Tony Gwynn Legacy tournament with an even louder statement, knocking off Arizona 3-2 in 10 innings.

The Aztecs are playing with confidence and energy, and they’re obviously having fun playing the game. Just consider their impromptu dogpile after Jacob Maekawa sprinted home on a wild pitch to score the winning run in the 10th Friday.

“A lot of good energy going on. Everybody’s real positive, we’re playing well, and things are going good right now,” said Maekawa, who drew a leadoff walk out of the 9-hole against Tylor Megill to start off the 10th. “I dove in and I looked up and had my whole team on me. It was a good feeling.”

Maekawa also made the best defensive play of the day, ranging far to his left and making a diving stop in the 43 hole on a Cal Stevenson grounder in the eighth, then throwing from his knees for the out. He and rangy shortstop David Hensley (who displayed a strong, accurate arm and smooth actions Friday) form a nice double-play tandem, anchoring a quality San Diego State defense behind a quality pitching staff.

Physical sophomore righthander Logan Boyer started Friday opposite similarly built junior righty Cody Deason of Arizona. Both of them ran into some trouble in the first inning, when each allowed two runs, but they both settled in thereafter. Boyer is a power pitcher with good running life on a fastball that sat 90-92 Friday, along with a promising diving changeup at 82-86 and a solid curveball. But after striking out the final two batters of the third inning and then sitting in the dugout during a long bottom of the frame, Boyer felt some arm stiffness on this cold night at the start of the fourth, so the Aztecs mashed the “emergency” button and summoned senior lefthander Jacob Erickson to take over for him.

Erickson got loose in a hurry and picked up where Boyer left off, striking out the side in order in the fourth, then running SDSU’s consecutive strikeouts streak to seven with two more in the fifth.