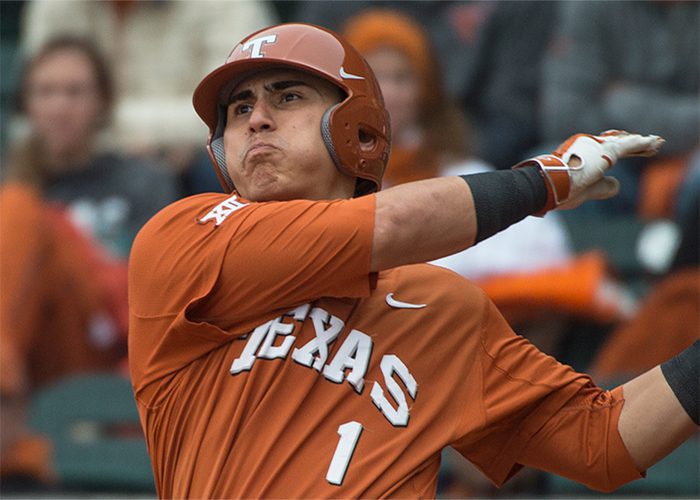 Can Tres Barrera and Texas find their way to the Big 12 automatic bid?

By our count, 424 different players took at least one at-bat or made an appearance on the mound in the Cape Cod League during the summer of 2015. That’s up from last year and it will likely continue to rise in 2016. Why point this out? Increasingly so, the rosters of the ten teams on the Cape are not so much a single collection of players, but instead are comprised of wave after wave of players.

The minimum requirement for hitters to be eligible for our list is for players to have participated in at least 20 games on the Cape. For pitchers, they had to have crossed a five appearance or 13 inning threshold. For perspective, 59 different pitchers and 89 different position players that played on the Cape in 2015 were not eligible for consideration.

Aside from explaining the process behind our list and providing further explanation as to why familiar star names like Zack Burdi, Bryson Brigman, Zack Collins, Robert Tyler, and many, many others are absent, understanding this revolving door of players is important to understanding what Cape Cod League baseball presently is. Scouts are often contending with shorter windows to evaluate some of the best players, but at the same time it’s giving us a look at more players playing on the Cape than ever before.

2015 was not a banner year in terms of top shelf, future superstar talent on the Cape. But, in terms of depth, the Cape was never better than it was this summer. Particularly since a number of players that also suited up for the USA Baseball Collegiate National Team returned to action in mid-July after their tour, we saw a number of talented waves of player come through the league this year.

If you look beyond the slam dunk first round type of talent, the Cape League was simply brimming with players that teams could easily envision themselves taking in the top three to four round of next year’s draft. Kyle Lewis, Bryan Reynolds, Nick Senzel, as well as arms look like excellent bets to go in the that range, as do other hitters, but the pitching on the Cape came much more in the form of wildcard varieties. Matt Krook and Jordan Sheffield have monstrous talent, but did not dominate the league from a statistical standpoint. Arms like Dakota Hudson and Corbin Burnes broke out in a big way, but also still have something to proven in terms of consistency next spring.

The list of players who could further blossom into potential first round selections is a longer one than we usually see from a Cape League crop. The proven, college star commodities might have been in somewhat short supply, but the upside and depth still deserved to be marveled at.

Now, after breaking down the best of the 2016 crop and 2017 crops individually, we further examine some of the best remaining prospects not already named to those lists. We continue by breaking down the top hitters who narrowly missed the cut of our initial lists. The names are not listed in order, and are instead grouped as potential top ten round draft choices.

A physical 6-foot-3, 240 pound catcher, there are very high hopes on Cieri headed into 2016, following an excellent Cape campaign in which he hit .319. Scouts expect him to further tap into his power potential, but he has an easy, line drive stroke that allows him to hit to all fields, an approach that will translate well at the next level.

Knizner could not repeat his offensive exploits of the spring, but he still has one of the most compact, efficient righty strokes in the country. He’s a very disciplined hitter and he’s flashed above average pull side power.