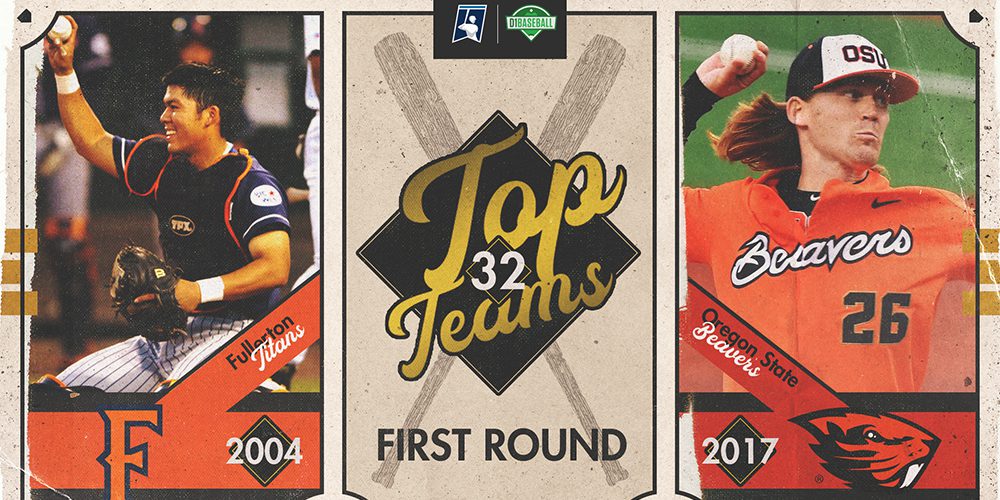 This group of Titans pulled off one of the great turnaround stories in college baseball history. With a loaded roster that featured future big leaguers Justin Turner, Kurt Suzuki, Ricky Romero, Vinnie Pestano, Brett Pill, Jason Windsor, Blake Davis and Danny Dorn, Fullerton entered the season with high hopes, ranking No. 4 in the preseason. But the Titans stumbled out of the gate, and by March they were out of the Top 25 altogether. As late as April 3, they were under .500 at 15-16. And then Big West Conference play began, and Fullerton took off like a rocket ship, going 19-2 in the league to snag a home regional.

After running through the losers’ bracket in the regional, Fullerton swept Tulane in supers to reach Omaha, where it downed South Carolina twice in three games and beat Miami to reach the Finals, setting up a showdown between Titans coach George Horton and his former mentor at Fullerton, Augie Garrido of Texas. The Titans won a pair of tight games over the Longhorns to capture their fourth national championship, thanks in no small measure to the heroics of CWS Most Outstanding Player Windsor, who went 2-0, 0.86 with 29 strikeouts in 21 innings over three appearances.

The only team in our field that didn’t reach the CWS Finals, the ’17 Beavers had a shot to go down as the greatest team in history, but they ran out of gas in Omaha’s final four. OSU posted a historic regular season, going 27-3 in the Pac-12 to win the regular season by six games to earn the No. 1 national seed. Then the Beavers obliterated their opposition in regionals and supers, outscoring their opponents 27-3 in an undefeated waltz through regionals, then crushing Vanderbilt by an aggregate 17-6 in a super regional sweep. That propelled OSU to Omaha with an eye-popping 54-4 overall record.

But ace Luke Heimlich — who went 11-1, 0.76 as a junior that season — did not play for the Beavs in the super regional or the College World Series after it came to light that he had pled guilty to a sexual assault as a juvenile, engulfing Oregon State in controversy. The Beavers rallied around each other and won their first two games in Omaha against Cal State Fullerton and LSU, but then their bats went quiet, and they fell in back-to-back games to LSU, 3-1 and 6-1. So these undermanned Beavers fell short of their ultimate goal, but this team was simply stacked to the gills with talent. The lineup featured four future first-round picks in Nick Madrigal, Cadyn Grenier, Trevor Larnach and 2019 Golden Spikes Award winner and No. 1 overall pick Adley Rutschman, plus third-rounder KJ Harrison and fifth-rounder Steven Kwan. Even without injured first-round pick Drew Rasmussen, the pitching staff dominated behind Heimlich, third-rounder Jake Thompson and consummate winner Bryce Fehmel.

How They Match Up: Although the same offensive nucleus would emerge as a buzzsaw a year later, Oregon State’s offense was efficient but not overpowering in 2017. However, its pitching was the best in the nation, ranking No. 1 in ERA and WHIP and No. 5 in strikeout-to-walk ratio. And its defense was suffocating, led by the dazzling duo of Madrigal and Grenier in the middle infield. As great as Oregon State was — and that gaudy record is due in large measure to its uncanny success in tight ballgames — that the ’04 Titans were more balanced, ranking ninth nationally in batting, 33rd in scoring and 22nd in ERA, as well as 17th in fielding percentage. And the impressive pro careers of Turner, Suzuki and Romero prove that this team’s talent was real. This matchup would be a treat for proponents of West Coast small ball, as both teams executed at an incredibly high level on offense and defense, and neither one relied on the long ball.

Both teams executed at an incredibly high level on offense and defense, and neither one relied on the long ball. Who ya got?