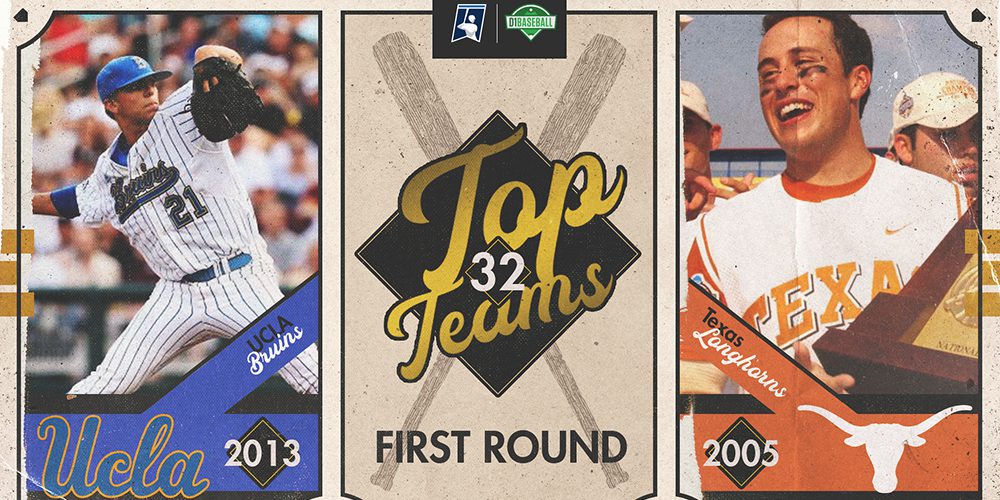 The first UCLA squad ever to win the College World Series was built to win during the dead-offense era ushered in by the BBCOR bat standards and the switch to TD Ameritrade Park, but before the seams on the baseballs were lowered to boost scoring. After going 39-17 overall in the regular season and 21-9 in the Pac-12 (third place), UCLA hosted a regional but did not land a national seed. The Bruins proceeded to ride historically dominant pitching and defense to a 10-0 postseason run and the championship. The Bruins took down Kris Bryant’s San Diego Toreros twice in their home regional, then swept arch-rival and No. 5 national seed Cal State Fullerton on the road in super regionals.

In Omaha, UCLA allowed just four runs in five games, beating LSU, NC State and No. 1 national seed North Carolina in bracket play, then sweeping Mississippi State in the Finals. UCLA’s 0.80 ERA in Omaha is the lowest ever for a champion in the metal-bat era, helping the Bruins overcome a .227 team batting average (the lowest in the metal-bat era) and just 19 runs (the fewest ever).

The dynamic duo of righties Adam Plutko (2-0, 1.38 in 13 IP) and Nick Vander Tuig (2-0, 0.60) plus lefty Grant Watson (1-0, 0.00 in 6 IP) gave UCLA five excellent starts, and David Berg — perhaps the best closer in college baseball history — finished out all five victories. Plutko and reliever Zack Weiss plus shortstop Pat Valaika and third baseman Kevin Kramer all went on to reach the major leagues, but this team was more about rock-solid strike-throwing and smothering defense than pure star power.

A year after the 2004 Longhorns earned the No. 1 national seed but fell in the CWS Finals against Cal State Fullerton, Texas found redemption with a team that had less star power, but plenty of guts. The ‘Horns finished the regular season 43-12 but finished third in the Big 12 (16-10), earning them a home regional but not a national seed. After surviving a battle with Arkansas in the Austin Regional, Texas went on the road to face a loaded Ole Miss squad in super regionals, and bounced back from a series-opening loss to take the series.

Texas would not lose again in 2005. The Longhorns allowed just eight runs during a 5-0 run through the CWS, including two victories against No. 4 national seed Baylor and one against No. 1 national seed Tulane. The Horns then swept Florida in the CWS Finals. Their pitching staff finished with a sparkling 1.40 ERA in a fairly offensive era at a very offensive park. Righties Kyle McCulloch (2-0, 1.32 in 13.2 IP) and Adrian Alaniz (2-0, 1.93) turned in two stellar starts apiece, and closer J. Brent Cox was untouchable, working 10.1 scoreless innings and finishing out all five Texas victories.

But Texas also led the CWS field with seven home runs (tied with Florida) and a .438 slugging percentage in Omaha spearheaded by red-hot CWS Most Outstanding Player David Maroul (who hit .500 with two homers and eight RBIs in five games). The lineup also included a pair of future major leaguers in outfielder Drew Stubbs and catcher Taylor Teagarden.

This championship was the second in four years for Texas, as well as the fifth and final title for legendary coach Augie Garrido.

How They Match Up: In a hypothetical matchup between these two clubs, expect runs to be at a premium. Texas ranked fourth in the nation in ERA and third in fielding percentage in 2005, making these Longhorns one of the best run-prevention outfits of their era. But the 2013 Bruins ranked sixth in ERA and fifth in fielding percentage. The difference is Texas was the more potent offensive club, ranking 80th nationally in batting and 90th in scoring, while UCLA ranked 259th in batting and 211th in scoring. But if the matchup were to occur in TD Ameritrade Park, give the advantage to UCLA, whose fly ball-oriented pitching staff was a perfect fit for a stadium where the wind usually blows in strongly. But if the scene shifted to the more offensive Rosenblatt Stadium, Texas was more poised to capitalize. Ultimately, though, both teams excelled at small ball on offense and execution on defense; this matchup would be a baseball purist’s fantasy.

Both teams excelled at small ball on offense and execution on defense; this matchup would be a baseball purist’s fantasy. Who comes away with the dub?