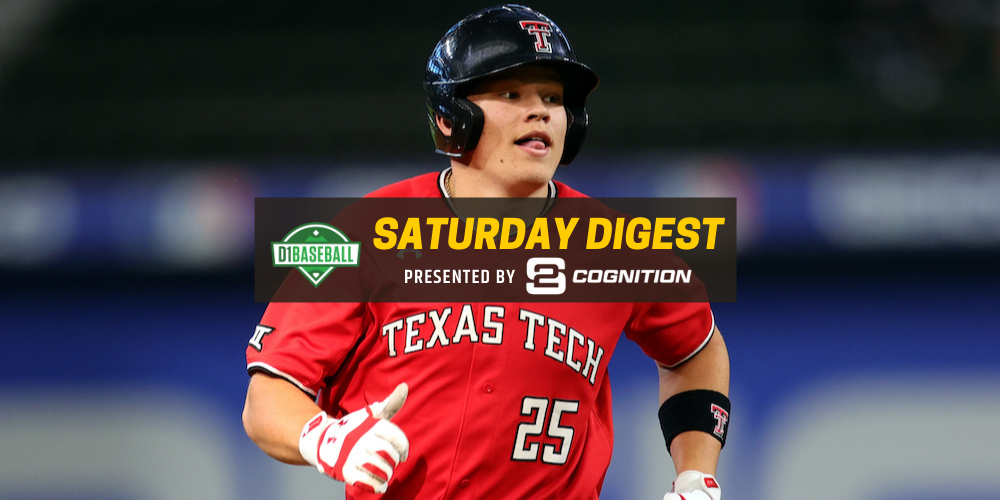 DID YOU SEE THAT?

— Georgia salvaged a win in the series finale against Tennessee with an 8-3 triumph. The Vols started hard-throwing righthanded pitcher Ben Joyce against the Bulldogs, and he struck out six, walked two and allowed three runs in four innings of work. Connor Tate hit a home run and finished the night with two RBIs, while Cole Tate also knocked in a pair of runs. Jaden Woods and Jack Gowen were terrific out of the pen with a combined six innings.

— Auburn was down 4-0 in the first inning to rival Alabama on Saturday, but surged late to clinched a series win over its rivals. Tommy Sheehan had to come out of the pen early in the game and tossed four shutout innings, while Carson Swilling and fireballer Chase Allsup tossed two shutout frames. Auburn sits at 4 in the RPI, while the Tide just hopes to make the SEC tournament at this point.

— Texas Tech is back in the spotlight after showing out in the first two games against Oklahoma State this weekend. Red Raiders prized freshman outfielder Owen Washburn. Washburn hit a grand slam in a seven-run inning, while Hudson White tallied two hits for the Red Raiders. Tech righthanded pitcher Brandon Birdsell put together yet another strong start, striking out five and allowing two runs on three hits in seven innings of work. Tech is up to 34 in the latest RPI, so there’s still work to be done. But it could finish Sunday in first place in the Big 12.

— Miami and Florida State split a pair of games to set the stage for a terrific series finale on Sunday. In the first game, Miami lefthanded pitcher Carson Palmquist out dueled Parker Messick, striking out five, walking one and allowing two runs in six innings, while Messick allowed five runs in 5.1 innings. Gage Ziehl also should get some love for the ‘Canes after he tossed three shutout frames out of the pen. In the nightcap, a 6-4 win for FSU, Wyatt Crowell struck out seven in four innings out of the bullpen, while Jordan Carrion had a big night at the plate with a home run and two RBIs.

— The Patriot League semifinals are in full swing, and Army has advanced to the championship after sweeping a doubleheader from Holy Cross on Saturday. Connelly Early struck out seven in eight innings in the first game, while in the second game, Sam Ruta hit two doubles and Nick Manesis knocked in five runs. In the other semifinal, Bucknell knocked off  Lehigh, 10-8, and the two teams will play again on Sunday.

— Stanford has put itself in excellent shape from a Top 16 and hosting standpoint this weekend, dominating Utah for the second-straight day to improve to 15 in the RPI and just two games behind Oregon State in the conference standings. After Alex Williams dealt in the series opener, Joey Dixon allowed two runs in five innings on Saturday before Ryan Bruno and Braden Montgomery each tossed two shutout frames out of the bullpen.

— Arizona has been slipping in the RPI over the past few weeks, but could the Wildcats notch a marquee series win for the first time in a while? U of A knocked off second-ranked Oregon State, 5-2, on Saturday to even that series. Lefthanded pitcher Garrett Irvin struck out nine and allowed a run on three hits in seven innings, while Noah Turley hit a home run.

— Dallas Baptist evened its series with Evansville with a 4-3 win on Saturday. Ryan Wrobleski had a big day at the plate with a triple and two hits, while Blayne Jones hit a home run. In other news, Southern Illinois moved into a tie for first place with UE after demolishing Indiana State on Saturday, 14-3. SIU’s RPI is outside of range at 73, but is very much a quality club with JT Weber, Kaeber Rog and others leading the charge.

— Dartmouth ended Columbia’s 19-game winning streak on Saturday with an 11-8 triumph. Kade Kretzschmar and Bryce Daniel each hit home runs for the Big Green, while Justin Murray had two hits and knocked in a pair of runs. Hunter Riggins allowed three runs in six innings, while Dalton Rogers was terrific out of the pen with three shutout frames. Carson Paetow had a home run for the Golden Eagles, while Blake Johnson knocked in a pair of runs.

— How about Maryland shortstop Matt Shaw? Shaw hit three homers, tallied four hits and knocked in eight runs in a 20-6 win over Michigan. The Terps are up to 13 in the RPI and continue to be in outstanding shape for a Top 16 seed and host site.

— Matt Shaw had a ridiculous game against Michigan, but how about TCU outfielder Porter Brown? Brown went bonkers for the Frogs in a 30-3 win over Kansas. Brown hit two homers, tallied a double, four hits and knocked in 10 … yes … 10 runs against the Jayhawks.

— It might not be Shaw or Brown worthy, but Liberty’s Three Hillier had a huge day, too, in a 23-3 win over Florida Gulf Coast. Hillier finished the afternoon with a home run, double, four hits and seven RBIs.

— Virginia Tech evened its series against Louisville, 4-3, with Drue Hackenberg putting together a solid start, striking out seven and allowing two runs on five hits in 6.1 innings of work. Henry Weycker was impressive out of the pen, too, with three strikeouts in 2.2 innings. Gavin Cross paced things offensively with a home run. After dropping a few spots in the RPI after Friday, the Hokies are back up five spots after Saturday’s win.

— Ole Miss took a step forward last weekend with a home series sweep over Missouri. Well, it has taken yet another step forward this weekend with a road series win over LSU. Ole Miss won the continuation of Friday’s game, 5-3, before crushing the Tigers, 11-1, to clinch a series win. Hunter Elliott struck out nine, walked three and allowed a run on four hits in 6.2 innings of work, while offensively, Justin Bench, Tim Elko and Kevin Graham each hit homers. Ole Miss is up to 39 in the RPI, while LSU is suddenly out of hosting range with an RPI of 29. What a weekend for the Rebels.

— In the Sun Belt, Coastal Carolina and Louisiana are the two bubble teams we’ve been watching so far this weekend. Coastal clinched a road series win over Troy with a 7-3 triumph as Michael Knorr allowed just two runs on four hits in six innings, while Elliot Carney allowed a run in three innings of work to close out the contest. Offensively, Nick Lucky led the way with two hits and two RBI. As for the Cajuns, they dropped a tough 6-4 decision to Texas State on the road to drop that series. Coastal is up to 37 in the RPI (+8) this week, while UL is down to 56.

— Could South Carolina be that SEC team who sneaks into the field on Selection Monday? The Gamecocks actually looked solid against Texas A&M last weekend, and have made easy work of Kentucky at home so far this weekend, winning 7-0 on Saturday. Noah Hall struck out eight in eight shutout frames. South Carolina is now 12-14 in the SEC with a 26-23 overall record, but the RPI is still problematic in the mid-60s. Clearly, the Gamecocks need to win some games in Hoover, but they’re in the fight.

— In Conference USA, Louisiana Tech and ODU held serve in the bubble race, each clinching series wins over Western Kentucky and Marshall, respectively. Meanwhile, Southern Miss responded from Friday night’s loss with an 8-3 win over UTSA.

— In the ACC, both Wake Forest and Pittsburgh are in trouble from an at-large standpoint. Wake dropped another game to UNC, 12-3, and is now 11-14-1 in the league. An RPI of 24 is a saving grace at this point, but that league record is not good. As for Pitt, it is now 12-13 in the league with an RPI of 61. That won’t get it done. Both teams desperately need a win in the series finale.

— You can pretty much stick a fork in Tulane’s postseason hopes (without winning the auto bid) after losing to Wichita State, 18-8, on Saturday. The Green Wave is down to 77 in the RPI with a .500 league record. It wasn’t long ago the Green Wave was near the top of the conference standings.