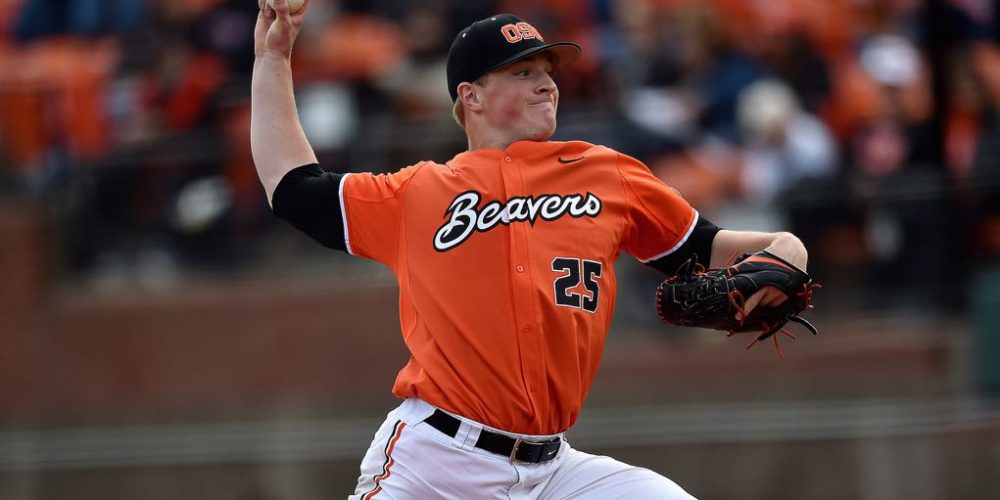 Oregon State head coach Pat Casey knows when he has a potentially great team on his hands, and though he won’t come out and say it, he gives us some very good vibes about his still-young Beavers as they continue through fall workouts.

This time last year, nothing was for certain for the Beavers. OSU had some serious firepower across the board to replace, including big leaguer Michael Conforto and others. And, for it to experience a great deal of success and return to the NCAA tournament, several young players would need to rise to the occasion.

Well, that happened. Though the Beavers had their fair share of bumps and bruises along the way last season, all was right with the world when the season came to a close. The Beavers finished near the top of the Pac-12 standings, just 2 1/2 games behind league champion UCLA, and reached the NCAA postseason, where they went 1-2 in the Dallas Regional and finished the season with a 39-18 overall record.

Good season for most? Absolutely. But, the Beavers aren’t satisfied with just getting to the postseason. The stage is now set for something greater, as last year’s young pups are now a year older and wiser with two weeks left of fall workouts.

“I think we’ve got a really, really good group of guys,” Casey told D1Baseball.com. “Workouts have been going really well and I think they’ve done a great job of adapting to the things we’re doing here pretty quickly.

“Even though we feel good, we’re still pretty cautious. Some guys will get limited innings and live action, so you have to be aware of that,” he continued. “But the mix of players we have look good. Practice is the greatest teaching time there is, and the older and younger guys are mixing together well.”

As with every team, the Beavers have a set list of goals they want to accomplish this fall in preparation for the 2016 campaign. But, beyond an impressive freshman class on campus, this team, unlike last season, doesn’t have a lot of holes to fill. For instance, the Beavers must replace ace righthander Andrew Moore, which certainly won’t be easy. The same goes for the loss of ultra-talented outfielder Jeff Hendrix, while Gabe Clark, who finished last season with a batting average in the 230s, is the only other drafted player not back this fall.

K.J. Harrison and rock-solid catcher Logan Ice headline the returning position players, along with a host of other young, but productive and talented players, while sophomore righthander Drew Rasmussen, who can get into the mid-90s with his fastball, gives Casey yet another big-time arm at the front-end of his rotation.

OSU has a lot of options both in the field and on the mound, and that’s a good thing for Casey. Now, comes the fun part of moving all those players around, while also establishing hard-set roles come February.

“Those young players we have are really impressive to me, especially the freshmen,” Casey said. “They have allowed us to play games at a lot of different positions to get different looks. We’re not making everything this fall about statistics, we’re making it about doing all the little things right.”

The stage is being set for yet another national title run in Corvallis and we have a full breakdown of players making strong cases this fall below.