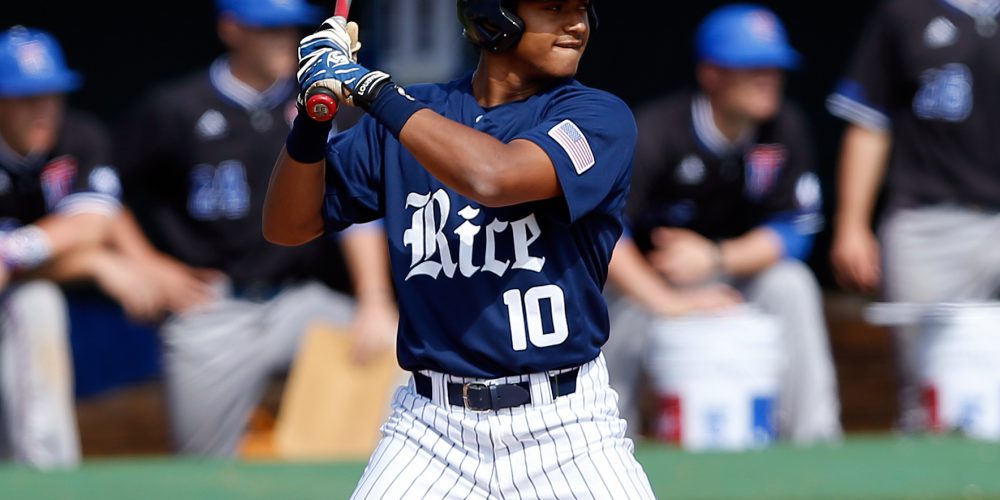 Dane Myers and Rice will need to finish the season very strong to make the postseason. (Rice photo)

HOUSTON — There might have been a silver lining with the way the Rice Owls finished last season.

For much of the regular season, the Owls battled a few ups and downs, and actually didn’t win the Conference USA crown for once.

Sure, Graham would’ve liked to advance with a chance for two wins and a trip back to the College World Series. However, he was very much encouraged by the way his team finished last season, hoping those set of performances serves as a springboard for the 2017 campaign.

“I thought we played our best baseball last year at the end of the year,” Graham said. “As for this fall, we’ve had some really good things happen. We’ve got some good team speed, especially with our crop of outfielders, and there’s enough juice with this club to be a really, really good team. But everyone faces the same situation, are you going to have enough pitching? That and just staying healthy are the two big keys for us moving forward.”

It’s easy for me to feel good about the Owls when you scan across the diamond. The middle part of the infield looks in terrific shape with the return of the dynamic duo of Ford Proctor and Tristan Gray, while the outfield will be as athletic as the Owls have ever had with the trio of Ryan Chandler, Charlie Warren and Dayne Wunderlich, among others.

The question mark for me lies on the mound. The Owls had a pair of quality starting pitchers last season in Jon Duplantier and Blake Fox. Duplantier was a power-armed righthander who led off the weekends, while Fox was an experienced lefthander who pitched in quite a few big moments. Both are gone, and that means Ricky Salinas, Willy Amador and now Dane Myers will be called upon to rise to the occasion.

The pieces undoubtedly are there for Rice to do some big things in 2017 and we take an in-depth look at its fall workouts with plenty of scoop and more.