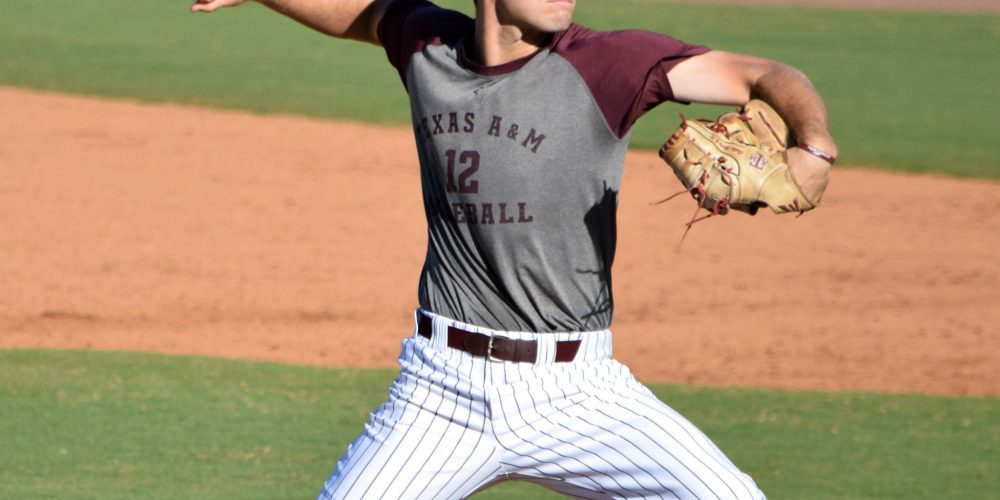 COLLEGE STATION, Texas — A year ago around this time, we made our annual fall baseball trip to Texas A&M. During that trip, no roster was needed as the Aggies returned almost every key player and faces were very much familiar.

That wasn’t the case last week as we trekked to the Brazos Valley. As opposed to knowing almost every player on the field, even the handy roster wasn’t much of a help due to the small numbers on the front of the practice shirts. So, I had to improvise a little bit with the help of a few folks around me.

It’ll take a while for A&M fans to get used to the new-look club at Blue Bell Park. The Aggies had one of the nation’s most experienced teams last season. And if not for a hiccup against TCU in the super regional, there’s a good chance that team goes on and competes well for a national title. But that didn’t happen with an experienced team, and long-time head coach Rob Childress now hopes that does happen with this team. Loaded on the mound, but potentially very inexperienced from a position standpoint, the Aggies have some holes, along with plenty of promise.

“We’re definitely making progress as we continue to improve each and everyday. These guys are really eager to learn and retain things, and it just seems like the guys are building on each day,” Childress said. “We’ve got some young guys who have been really impressive, and we’ve got some older guys, positionally and on the mound, who have come back a year older and wiser.

“There are some bright new stars who are going to continue growing before our eyes right now, and throughout the spring,” he continued. “We’re seeing a pretty gradual improvement from an offensive standpoint with a nice mix of veterans and new guys. But it’s also time for some guys who are back from last year’s team to step into some key roles and do some good things for us.”

Looking for a good comparison for this A&M team? Just take a look at its SEC West counterparts, the LSU Tigers. The Tigers lost every key position player from the 2015 team except for athletic outfielder Jake Fraley. Many expected the Tigers to take a significant step back from an offensive standpoint, but hitting coach Andy Cannizaro got his young Tigers in gear and they finished the year with a .295 batting average, went 45-21 and ended the season as a top eight national seed. TCU, too, was expected to take a small step back last season after losing many key players from its 2015 team. Yet, the Horned Frogs hit their stride halfway through the 2016 campaign, beat the heavily favored Aggies in a super regional and once again went to Omaha.

There’s a lot to talk about in regards to the Aggies, including the rise of big-time righthander Corbin Martin, so let’s cut to the chase with the inside scoop on Childress’ club this fall, below.