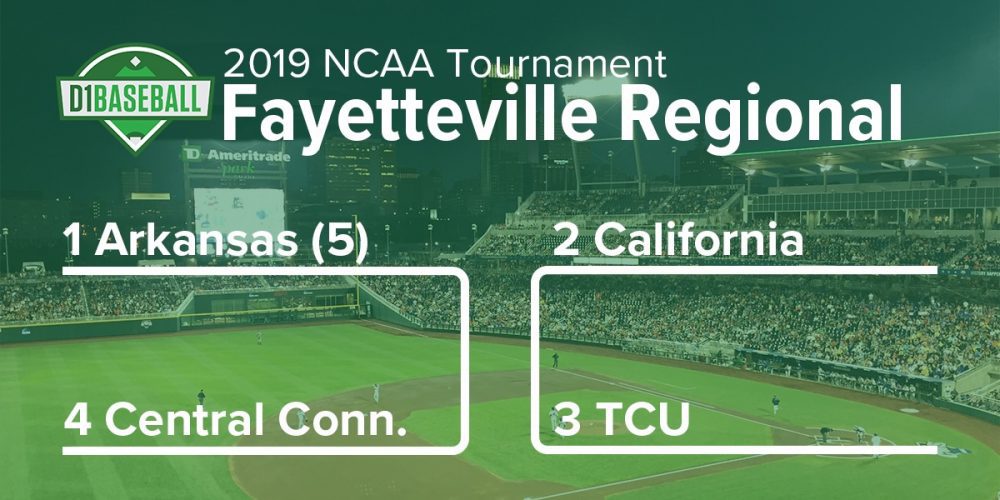 Arkansas finished last season as the national runner-up, and the Hogs look to finish the job this season. It’s joined in the Fayetteville Regional by California, surprising entrant TCU and Central Connecticut, which knocked off Bryant last weekend.

Martin had a sensational freshman campaign and has been an absolute tear since starting off a little slow this spring. In addition to his power at the plate and his game-breaking offensive qualities, he’s also a strong defender with a good arm and can make things happen on the bases. Arkansas went into a different gear when he got rolling at the midseason mark.

The reigning Golden Spikes Award winner can change any game with one swing of the bat. He’s hitting .387 with a 1.277 OPS and has 15 home runs and 49 RBIs. Depending on how the wind is playing at Baum-Walker Stadium this weekend, it could be a loud regional for the hard-hitting Cal junior.

It’s such a luxury to have an outstanding defender out in center field, and the Hogs have that in Fletcher. The talented junior has terrific instincts, takes plus routes to the ball and also has good speed. He has saved Arkansas countless runs throughout his career in Fayetteville. Fletcher, as usual, could be a game-changer this weekend.

It’s a close, close race between Campbell and TCU lefthander Nick Lodolo. But give me Campbell at home this weekend in front of his Hog-friendly crowd. The 6-foot-6, 185-pound, righthander has had a great season and has been much more consistent than previous campaigns. He’s walked just 18 batters this season, has tallied 100 strikeouts and teams are hitting him at a .211 clip.

The Horned Frogs lost one of their best arms last week in talented young Marcelo Perez, so they’re going to be stretched a little thin from a pitching standpoint this weekend. That means Lodolo must put together a strong start in the opener against California. Lodolo will sit anywhere from 90-94 mph with his fastball, along with a very solid slurve. He’s also struck out 125 batters this season.

All of these teams have some question marks in the weekend rotation, but the Frogs get the slightest of edges with Lodolo leading the charge, followed by talented righthander Charles King and veteran lefty Brandon Williamson. Another X-factor is righthander Jared Janczak, who looked like his old self last weekend at the Big 12 tournament. If he shows up again this weekend? Watch out.

While the Hogs have two freshmen in the weekend rotation with Patrick Wicklander and Connor Noland, the bullpen is deep and ready to assist if need be. Kole Ramage was a starter for the Hogs last season and can give them six or seven innings out of the pen if it’s required, while lefty Matt Cronin is one of the nation’s premier closers with 39 strikeouts in 26 innings. Jacob Kostyshock, Kevin Kopps and Zebulon Vermillion are other quality arms to watch.

There’s no doubt which team in this regional is the most offensive. It’s Arkansas. The Hogs are hitting .299 as a team, which ranks 23rd nationally. They also rank 14th nationally in home runs per game with 1.34, while they are 19th in on-base percentage and 16th in scoring with 7.5 runs per game. The Hogs are like an avalanche when they get rolling.

None of these teams in this regional are great defensively, with the Hogs, Frogs and Golden Bears all sitting at 100 or higher in terms of fielding percentage. But give me the Hogs with Dom Fletcher leading the way in center field, Casey Martin and Jack Kenley doing the dirty work up the middle and hard-nosed Casey Opitz doing a more than adequate job behind the plate.

I’ve said all along, if the Hogs can win the first two games, it’s going to be very difficult to knock them out of a regional. Arkansas has a terrific No. 1 starting pitcher in Isaiah Campbell, but things get a bit more navigable for opposing teams after he pitches. For someone else to win this regional, Arkansas will need to be upset the first two days. If not, it’s lights out. 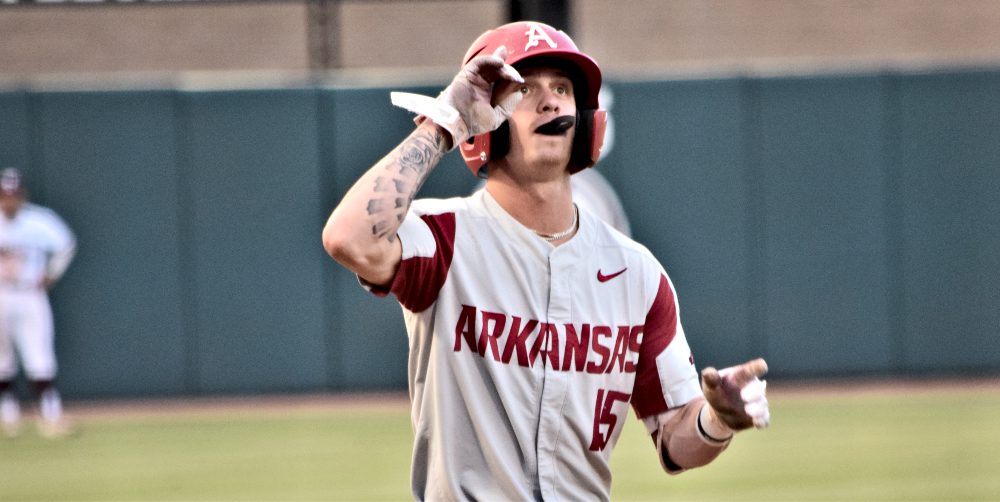 The Hogs have one of the nation’s premier offensive lineups and that is what should carry them through the postseason.

Arkansas is hitting .299 as a team, which ranks 23rd nationally and third in the Southeastern Conference. The Hogs also rank 12th nationally in home runs, 16th in doubles and 10th in slugging percentage. Matt Goodheart and Trevor Ezell have given this team a shot in the arm. Goodheart, a San Jacinto (Texas) College transfer, leads the team with a .364 average, 1.094 OPS and 13 doubles and Ezell has been a mainstay at the top of the lineup. Meanwhile Heston Kjerstad has continued where he left off last season with 14 homers and 44 RBIs. Dom Fletcher has been much more consistent this spring and is hitting .316 with 10 homers and 53 RBIs and the unsung hero of this team is Jack Kenley, who went from a little used non-power hitting infielder into a hard-hitting consistent producer with a .311 average, 12 homers and 48 RBIs. Jacob Nesbit is one of the team leaders in RBIs with 41 and Martin has been outstanding since the midseason mark. He leads this team with 15 homers and is tied with Fletcher at 53 RBIs. The Hogs entered the season with a scary three-man punch in Kjerstad, Martin and Fletcher, but those other pieces have turned this into a well-rounded, well-oiled machine.