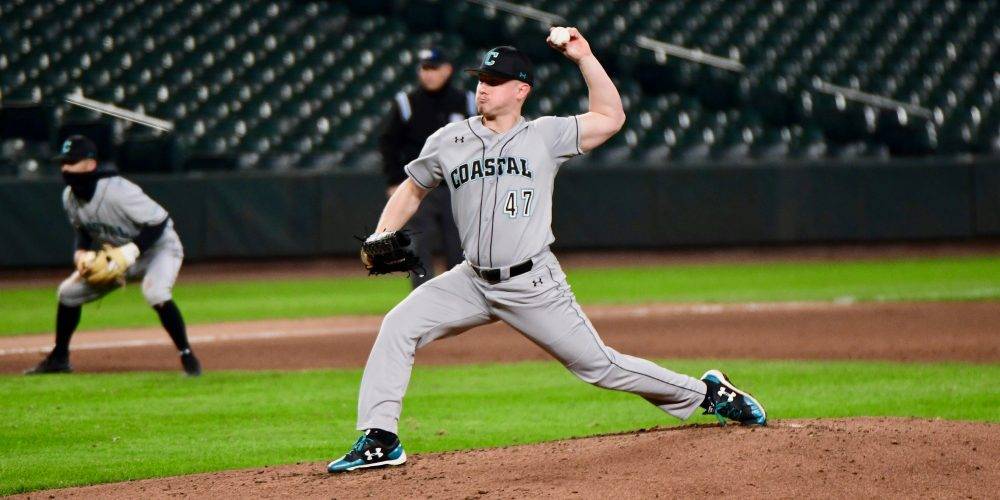 SEATTLE — Coastal Carolina had a very good 2018 season, winning 43 games and hosting a regional — but it’s no mystery that its Achilles’ heel a year ago was inconsistent strike-throwing. Coastal ranked 215th in the nation with 4.57 walks allowed per nine innings last spring, and the Chants have placed heavy emphasis on improving in that department in 2019. They’ve made some progress, but they still entered the Seattle Baseball Showcase this weekend allowing 3.88 walks per nine (95th nationally).

So the coaches decided it was time to shake up the weekend rotation a little bit. In particular, it was time to get fourth-year junior lefthander Austin Kitchen into the Saturday starter spot. Kitchen’s calling card is his ability to pound the strike zone with three pitches, and he entered Week Four with just one walk allowed in 12 innings.

On Saturday night against Washington, Kitchen gave Coastal exactly what it needed, working seven strong innings and allowing just one walk and five hits while striking out seven. He exited with the score tied 2-2, and Coastal scored three in the eighth to win 5-2. But Kitchen, who missed last season with Tommy John surgery, was the story.

“I was really proud of Kitchen, he’s just so much more comfortable knowing he’s gonna pitch and when he’s gonna pitch,” Coastal coach Gary Gilmore said. “He pounded the zone, threw three pitches for strikes, didn’t walk anybody. For us to move forward, that’s the No. 1 area is our ball/strike ratio is not where it needs to be. He went out there today and completely changed that. We’re a different team when we get a guy do that, we don’t have to strike a ton of people out; just throw strikes, and we’re gonna figure out a way to score a handful of runs just about every game, unless there’s some insane animal out there that slows us down. We’ll get a walk and a bag here or there, get a knock, we’ll figure something out. It’s just the pitching thing has been hot/cold.”