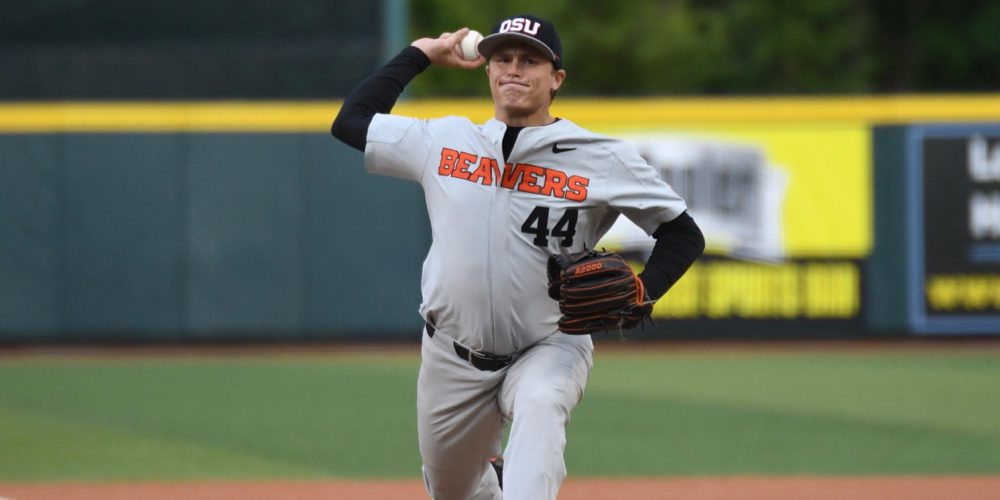 EUGENE, Ore. — It’s hard not to gush about No. 1 Oregon State. Well, it’s hard for everyone but crusty old Pat Casey. The coach with the 1,001 career wins is certainly not about to revel in his team’s 41-4 record, or its 24-3 mark in the Pac-12, or its elite pitching and defense. He’ll never let his Beavers get too full of themselves.

So after Oregon State completed its first-ever sweep at PK Park with a 1-0 win against Oregon, Casey seemed … stoic. He was satisfied with his defense (“We defended,” he said in Caseyan fashion). He certainly couldn’t complain about his pitching. But his offense … well, the Beavers had a lot of baserunners on Saturday, but they left 14 of them on base, including 10 in scoring position. Getting a few clutch hits with men aboard was about the only thing Oregon State failed to do this weekend.

“We struggled to do some good things with guys in scoring position,” Casey said. “Seemed like we were behind the 8-ball all night long, which … a lot of that had to do with their pitching. We’ve got to get better offensively, there’s no doubt about that.”

I walked away this weekend thinking Oregon State is the most complete team in the country, although Louisville and North Carolina would give the Beavers runs for their money in that department, and so would a healthy Texas Tech or a healthy TCU or a hot Florida. I really liked what I saw from Oregon State’s offense, which maybe lacks the game-changing power that some of the other top contenders can offer but makes up for it with athleticism, versatility, bat-handling skills and depth. The Beavers are loaded with tough outs from top to bottom — Michael Gretler and Cadyn Grenier are legitimate threats with good bat speed and solid approaches at the bottom of the lineup.

KJ Harrison gives the Beavers some pop in the heart of the order, and it’s certainly crucial that he stays healthy — he left Saturday’s game with a twisted ankle, but Casey didn’t seem overly concerned about it. OSU’s other biggest offensive weapon, first-team preseason All-American Nick Madrigal, was hit by a pitch in the hand in the late innings Saturday but remained in the game.

Madrigal lived up to his reputation as one of college baseball’s most dynamic players this weekend; he hit five balls on the nose Thursday but had just one hit to show for it, then he drilled a single and a double on Friday and had two more hits Saturday. On the season, he’s batting .389 with 17 doubles, and he wears out the gaps over and over. Maybe the Jose Altuve comp is too obvious, and maybe it’s unfair because Altuve is such an outlier — but it’s hard not to think of Altuve when you watch the 5-foot-7, 161-pound Madrigal rip line drives all over the field for three straight days. He can run, he’s instinctive, and his energy is contagious on the basepaths and on defense, where he and Grenier put on a show all weekend.