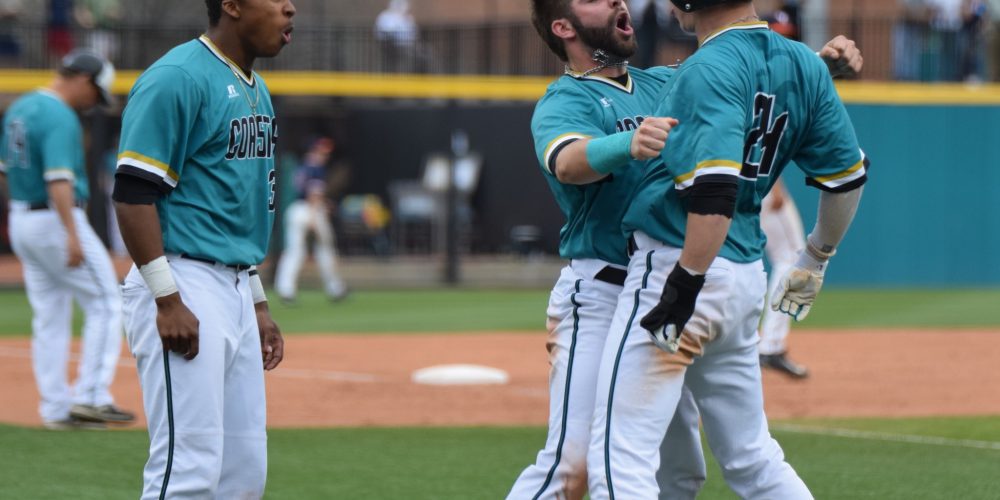 CONWAY, S.C. — The most compelling tournament of college baseball’s opening weekend took place in Conway and Myrtle Beach, where three Top 25 clubs and three other teams participated in the Caravelle Resort Tournament. All three ranked teams — preseason No. 10 NC State, No. 13 Virginia and No. 24 Coastal Carolina — finished the tournament 2-1, and all three looked like legitimate Omaha contenders but all three have flaws that must be addressed. Below, I’ll examine which players stood out most for the teams at the Caravelle Tournament, and consider what each team has to work on going forward.

The most entertaining games of the weekend were NC State’s wild 13-10 win against the Chanticleers on Saturday at CCU’s Brooks Stadium, and Coastal’s come-from-behind 5-4 win Sunday against Virginia. The crowds for both were outstanding (Sunday drew 3,136 fans, the largest on-campus crowd in Coastal history), creating an intense regional-type atmosphere. And the Chanticleers truly fed off the energy of their crowd.

“Sometimes we say, like, ‘Oh, it doesn’t matter who’s out there.’ But it definitely fires us up when we hear our fans going crazy,” said Coastal preseason All-America shortstop Michael Paez, whose game-tying two-run single in the seventh inning Sunday sent the crowd into a frenzy. “There’s no better feeling than hearing 3,000 people cheering us on.”

Coastal is an emotional team, and senior center fielder Anthony Marks sets the tone. The 5-foot-8 speedster plays the game like his beard is on fire, and his energy is infectious both on the field and in the dugout. He’s also just a really good college baseball player with a knack for getting on base and making things happen; he drew two walks and reached on an infield single on Sunday, making the offense go out of the leadoff spot.

Here are some other observations on the Chanticleers, followed by takeaways on the other ranked teams in the field. Old Dominion also had a good weekend, going 3-0, but I missed its games Saturday and Sunday while I was in Conway. See my Friday post for a report on the Monarchs.