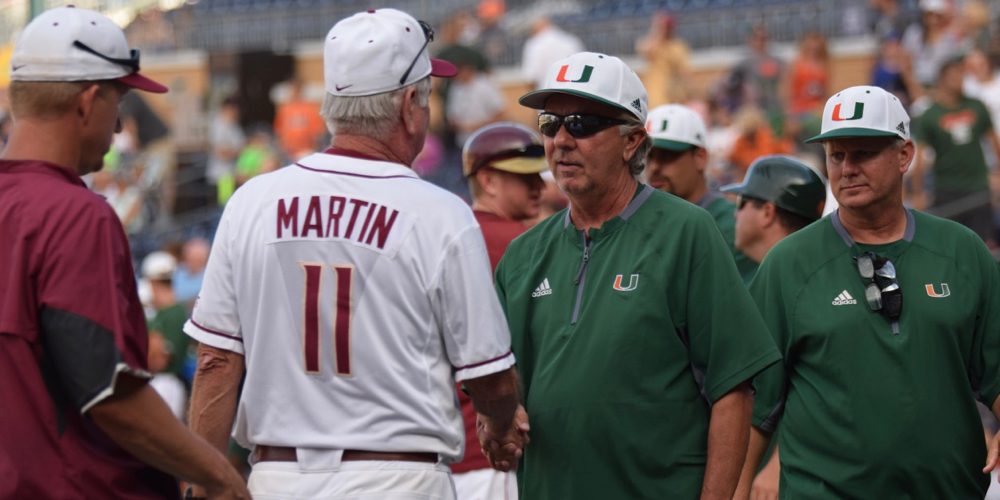 The Five Most Interesting Coaches For 2018

The one overriding factor to this year’s coaching carousel is the fact that a lot of traditional powers have been scuffling and in need of a major injection of adrenaline in the program. The coaching storylines may be the most dynamic in our sport for a number of years. The kickoff point would be the impending final seasons for legends like Jim Morris and Mike Gillespie, who both have well over 1,000 wins apiece.

Here are the most interesting coaches to watch in 2018.

– Jim Morris, Miami
Years At Miami: 25th
Prior: 12 years at Georgia Tech
Overall Record: 1,062-446-3
Of Note: This will be his final season as the Hurricanes head coach.
Last season saw The U have its worst campaign in a generation, failing to make the NCAA Tournament for the first time since 1972. After going 31-27 overall and 16-13 in ACC play, the Canes return most of the important arms from a team that had a 3.77 ERA. Longtime assistant coach Gino DiMare will take over the program next season and hopes to help the team hit better than last year’s .231 team average which was 289th in the country.


– Mike Gillespie, UC Irvine
Years at UCI: 11th
Prior: 20 years at USC
Overall Record: 1,124-696-2
Of Note: Announced his retirement following the 2018 season.
After starting his first four seasons by going to the NCAA regionals as head coach of the Anteaters, Gillespie’s teams have only reached the post-season once in the last six seasons, though his 2014 team made it to Omaha. Gillespie is a Hall of Fame coach who has guided 19 teams to the NCAA Tournament and five teams to Omaha. A return to the post-season in 2018 could be tall order with a lot of new faces in both the lineup and the rotation, along with missing Big West Player of the Year in Keston Hiura.


– Mark Kingston, South Carolina
Years at South Carolina: 1st
Prior: Three years at South Florida, five years at Illinois State
Overall Record: 270-179-1
Of Note: Inherits a tradition-rich program that has struggled to regain its power status.
Kingston comes to Columbia with a lot of hype, including making a winner out of ISU and then turning the Bulls into a post-season team in a short amount of time. At ISU he never won fewer than 32 games and then went to the NCAA Tournament twice in his three years at USF. He takes over the reigns from a program that won 199 games the last five years under Chad Holbrook, but missed the Big Dance in two of the last three years and never could win its way to Omaha. There is a ton of pressure that goes with this gig. We’ll see how well Kingston handles it.

– Dave Esquer, Stanford
Years at Stanford: 1st
Prior: 18 years at Cal
Overall Record: 525-467-2
Of Note: Takes over for the legendary Mark Marquess, his former college coach.
It’s rare that a coach will go from Cal to its hated rival Stanford, but in the case of coach Esquer it’s hard to argue this hire. He was a winner in Berkeley despite having coached with few amenities and not much support from the athletic department. Esquer is also notorious for having the Cal administration announce the program was being shut down in the middle of the 2011 season, then guiding that team to the College World Series. On the Farm he’ll inherit a quality bunch of returnees, including a stout duo of starting pitchers in Kris Bubic and Tristan Beck. Look for the Cardinal to challenge Oregon State in the Pac 12 rigors.

– Mervyl Melendez, Florida International
Years at FIU: 2nd
Prior: 12 years at Bethune-Cookman, five years at Alabama State
Overall Record: 568-463
Of Note: There is youthful enthusiasm for year two in Miami.
Few coaches have ever dominated their conference more thoroughly than Melendez did at BCU, where he won the MEAC title 11 times in his 12 years. Melendez then went on to post four straight 30-plus win seasons in his five years at ASU, setting program records for wins in a season three times. Year one at FIU ended in a 31-27 record and 2018 may be a bit tough as six Panthers were drafted last June and four of the starting order for this season will be newcomers. But the Melendez factor has been felt immediately at FIU as the fall 2016 recruiting class was highly ranked and this year’s incoming class was ranked at No. 22 in the country by D1Baseball. The future is more than bright.

Five More Coaches To Watch
Beyond the top five above, these are the next level of coaches who could be (and maybe should be) making a big move in 2018.

– Josh Holliday, Oklahoma State
Last year was a surprise run to the Big 12 title and NCAA Tournament. Can the Pokes maestro get it done in the regular season this year? The yearling pitchers will be the key.

– Tracy Smith, Arizona State
Last year was the first sub-30 win season in 54 years for the Devils, so now is the time to turn the corner. They’ll have had top-10 recruiting classes in each of the last two seasons, raising the talent level even though they’ll still be young.

– Ed Blankmeyer, St. John’s
Blank has been the Johnnies head coach for 22 years, but this might be his best team yet. Pitching will be the team strength and the overall team experience they’ll have in the lineup will help them dominate the Big East.

– Andy Cannizaro, Mississippi State
Not only can this dude bench press 340 pounds, but he’ll have an uber-experienced team returning due to the injury bug that hit last season. The Dogs still managed to win 40 games with a banged up team in 2017.

– Scott Stricklin, Georgia
The Bulldogs haven’t come close to fulfilling their potential under Stricklin, but this could be the year. New pitching coach Sean Kenny is the key to rebuilding the confidence of this staff. The ability is there, but are the results?