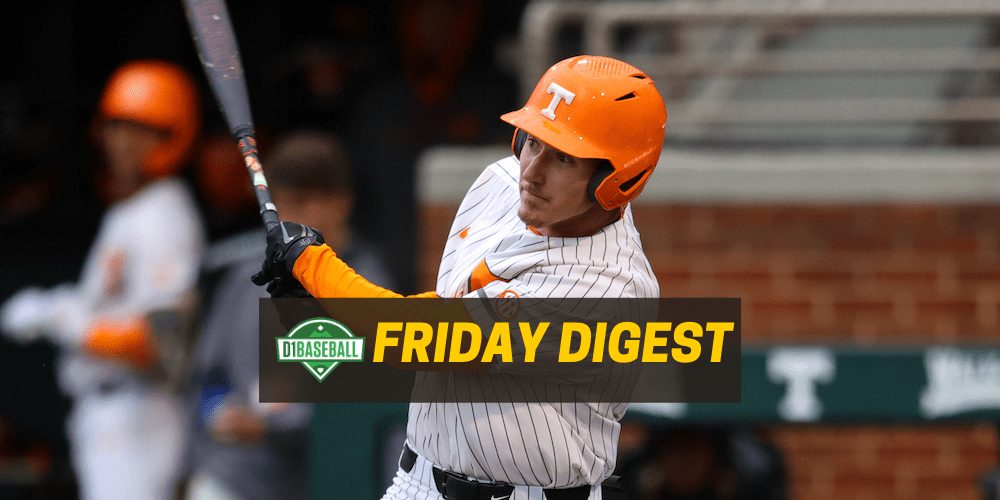 Tennessee was ultra-impressive a few weeks ago at the Shriners College Classic, and the Vols have only continued their strong play since. The Vols hit the road to Oxford Friday night for their stiffest test of the season to-date and couldn’t have been more impressive in a 12-1 beatdown. Offensively, the Vols had a quiet first inning before erupting for six runs in the second, led by an Evan Russell RBI single, Cortland Lawson bases-clearing triple and a Jared Dickey two-run home run. Dickey hit another home run in the game and finished the contest with three RBI, while Luc Lipcius hit a majestic home run as well. But for me, the most impressive performance of the night was freshman righthander Chase Burns against that powerful Ole Miss lineup. Burns didn’t look like a freshman, showing poise on the mound, while also showing strong feel for the mid-to-upper 90s heater, upper-80s cutter and a changeup. Burns finished the night with 11 strikeouts, no walks and allowed just a run on two hits in seven innings. It’s just one game of a three-game series, but it was the Vols who looked like the nation’s premier club.

Boy, that series loss to San Diego on Opening Weekend seems like ancient history right now. The Ducks are sizzling hot and continued their streak Friday night in a 9-7 win over USC to improve to 6-1 in the Pac 12. As you might imagine by that score, the top of the U of O lineup was sizzling in this game, as the top four hitters in the lineup combined for nine hits and three RBI. Brennan Milone, who is easily in the mix for national breakout player of the year, had another monster showing with a two-run home run, while Josh Kasevich knocked in four runs and smacked a home run as well. Furthermore, Sam Novitske finished the game with a pair of hits. Oregon has now won eight of its last nine games. In other words, the Waz effect continues to be real. Pretty impressive.

OK, any way I explain this won’t do it justice, so just watch the embed below. But Texas and Texas Tech, as you might suspect, had an absolute thriller in the series opener on Friday in Lubbock. The Longhorns and Red Raiders entered the bottom of the 10th inning tied at 4-4. To give you an idea of how wild this game was, all four Longhorns runs were scored via solo home runs. So, going back to the 10th. With Texas reliever Aaron Nixon on the mound, Kurt Wilson walked on a 3-2 count to start the inning, Owen Washburn then proceeded to walk. And after a Hudson White sacrifice bunt, Nixon struck out Parker Kelly with the winning run at third base. However, as Nixon went to get set with Dillon Carter at the plate, the Longhorns righthanded pitcher looked down at his glove for an extended period and Wilson saw an opening to steal home. And thus, he did in one of the more bizarre finishes I’ve ever seen in a 5-4 Tech triumph. Lost in the mix of the craziness were the performances put together by both starting pitchers. Texas lefty Pete Hansen struck out seven and allowed three runs and three hits in seven innings, while Andrew Morris was solid for the Red Raiders, allowing a run on six hits in six innings.

The Bruins had a strong showing at the Shriners College Classic followed by a series loss to rival USC at home. Therefore, a little shine was worn off that Houston trip. However, the Bruins showed back up in a BIG way Friday night in a dominant 10-2 win over red-hot Arizona. Jake Brooks set the tone on the mound with a strong start, striking out three and allowing just two runs on seven hits in 6.2 innings of work, while the UCLA offense rose to the occasion with fab freshman Cody Schrier hitting a grand slam and finishing the day with five RBIs, while Malakhi Knight had a pair of hits. Give credit to UCLA freshman reliever Alonzo Tredwell, too, for striking out three in 1.1 shutout innings. We’ll see if UCLA can close the deal this weekend, but what a strong showing in the series opener.

5 — Charlotte Cools Off Old Dominion For A Day

ODU was one of the hottest teams in college baseball entering Friday’s series opener against Charlotte. The Monarchs were 17-2 overall, even if they had played a rather weak non-conference schedule. So, we were curious to see how they’d fare against a beat up, but quality Charlotte club. Well, at least for a day, not so well. Charlotte scored five runs in the first inning, including a David McCabe home run, to beat the Monarchs 11-4 while also outhitting them 16-7. Charlotte’s Cam Fisher had three hits, one a home run, and two RBIs, while Austin Knight finished the night with four hits and Jack Dragum, Will Butcher and Kaden Hopson each knocked in two runs. Charlotte is ‘quietly’ 15-6 right now, and another win this weekend would bolster their resume in a big way.

Cal Poly entered the season as one of those teams in the Big West with some serious potential. And though it entered Friday’s contest with an 11-9 record, it had one of the nation’s most talented arms on the mound in righthanded pitcher Drew Thorpe. The righty was phenomenal in a 7-0 win over UC San Diego. He struck out a ridiculous 15 batters, walked just two and allowed three hits in seven shutout innings. According to one of our colleagues, Nathan Rode, he sat 88-92 mph with his fastball and had excellent usual feel of his changeup to hitters on both the left and right side. Cal Poly still has a lot of work to do, but they have two of the best in Thorpe and shortstop Brooks Lee.

We couldn’t mention Drew Thorpe’s monster performance without also giving All-American Florida State lefthanded pitcher Parker Messick some love, too. Messick has been terrific so far this season and didn’t deviate from the norm Friday in a 4-0 win over Duke. Messick went seven innings, striking out 14, walking just two and allowing just four hits. He also threw 105 pitches, 71 for strikes. The 14 strikeouts were a career high for Messick, who now has 65 strikeouts and just 11 walks in 38 innings of work. He’s having a special season for the Seminoles.

It’s hard to imagine that LSU is on the verge of being unranked in the next few days. Coming into the season, we had LSU barely in the Top 10. And frankly, I thought we were a little light on the Tigers. Turns out, we might’ve been too bullish on Jay Johnson’s squad. The good news is that LSU played decent defense on Friday night in a 7-2 loss to Florida. The bad news? The Tigers had to face Florida lefthanded pitcher Hunter Barco, who struck out eight, walked three and allowed just two hits in seven shutout innings. Meanwhile, LSU righty Blake Money saw his ERA creep over four Friday night after allowing six runs on seven hits in five innings. UF’s offense got production from several sluggers, with BT Riopelle, Colby Halter and Wyatt Langford all hitting home runs.

9 — DBU On The Verge Of Being Ranked Again

The Patriots entered the season in our Top 25 but stumbled out of the gate with a home series loss to SEMO. Well, DBU has been much better since that series and is a win away from notching yet another marquee series win — this time over Maryland after an 8-3 triumph on Friday night. DBU righthanded pitcher Jacob Meador put together a solid start, striking out six, walking three and allowing two runs on three hits in six innings of work, while Blayne Jones had two doubles, three hits and two RBIs and Jace Grady, who we mentioned as a guy that needs to finish the season strong, had three hits and an RBI. Nick Dean allowed five runs (three earned) on six hits in 4.1 innings for the Terps.

10 — Virginia Continues To Roll, Clemson Not So Much

It was another eventful night in the ACC, but Virginia isn’t causing too much drama for head coach Brian O’Connor. The Cavaliers, who were red-hot entering Friday’s contest against Maryland, continued to get more strong pitching from lefthanded pitcher Nate Savino in an 8-2 win over Wake Forest. Savino, who had success with his fastball and slider, struck out five and allowed two runs on four hits in 6.1 innings. He did have some command issues at times, but he made pitches when needed. Matt Wyatt finished the game with 2.2 shutout frames, while Alex Tappen hit a home run and Griff O’Ferrall had four hits and an RBI … As for Monte Lee’s club, Clemson was outscored 18-7 in a doubleheader setback Friday afternoon and has now lost seven of its last nine games. Clemson starting pitchers allowed 13 runs in just 5 2/3 innings against the Panthers.

〈
Previous Article 'We're Not Dead Yet': Wolfpack Storms Back
Next Article Louisville Stays Sizzling Hot Against BC
〉