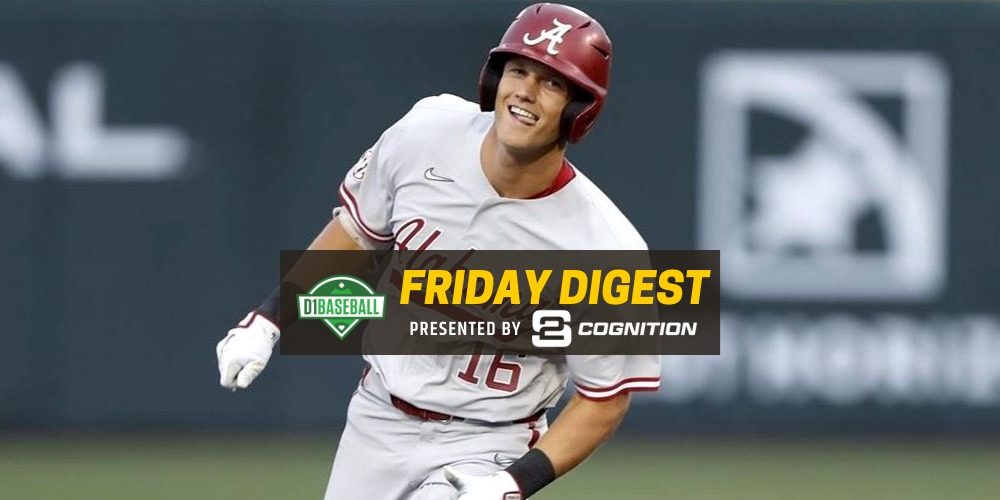 Just a few days ago, the college baseball world was abuzz about Tennessee’s 31-1 record, as we all scrambled to put that first half into historical context and speculated on whether the Vols had a chance to put together the greatest season in college baseball history. All of that talk is still valid — Tennessee is still in the midst of a historic season — but suddenly the Volunteers find themselves in the midst of a genuine losing streak. Which is to say, they have lost back-to-back games — and that’s a big story, given their historic showing through the season’s first eight weeks.

Tennessee, the first team ever to start SEC play 12-0, suffered its first conference loss of the season on Friday against No. 24 Alabama, which went into Knoxville and downed the Vols 6-3. UT jumped out to an early 2-0 lead in the first, but ‘Bama responded with solo homers in the second (from Owen Diodati) and third (from Jim Jarvis) to tie the score, then surged ahead for good with three runs in the fourth, sparked by another Diodati solo shot. Garrett McMillan (5.1 IP, 3 ER) and three relievers held the potent Tennessee offense at bay.

Suddenly, it’s Alabama that has the SEC’s longest winning streak: eight in a row, including the final two of a series against Texas A&M, a road sweep of Ole Miss, and now the opener against Tennessee. Alabama is 8-5, and certainly justifying its place in the Top 25.

Besides Tennessee, Miami entered this week as the hottest team in college baseball. But Virginia Tech had also played great baseball over the last month, and the Hokies rode a four-series winning streak into the Top 25, setting up an intriguing showdown against the second-ranked Hurricanes in Blacksburg. The first two games of the series turned out to be more beatdown than showdown, as Virginia Tech bludgeoned Miami 12-5 on Thursday and then followed it up with a 13-2 blowout win Friday, clinching the series. Virginia Tech’s balanced 16-hit barrage was spearheaded by Eduardo Malinowski (2-for-4, 2B, 4 RBI), Nick Biddison (3-for-5, 2 R, RBI) and Tanner Schobel (3-for-5, 3 R, 2B, RBI). And the Hokies got a great start from Drue Hackenberg (8 IP, 5 H, 2 R, 1 ER, 3 BB, 7 K), who subdued Miami’s previously hot offense.

The Hokies have won 13 of their last 15 games and five straight ACC series to improve to 9-6 in the league. Friday’s game was played in front of the largest regular-season crowd in English Field history (3,521) and also featured another milestone:

There might not be a team in college baseball that has to endure a more grueling stretch this season than TCU’s current six-week gauntlet (vs. West Virginia, at Texas, vs. Texas Tech, at Oklahoma State, at Florida State, vs. Oklahoma). The Frogs lost those first two series, so they found themselves in desperate need of a home series win against No. 4 Texas Tech this weekend. And they made it happen.

The Frogs followed up Thursday’s 7-4 win with a series-clinching 4-3 victory on Friday, improving them to 9-5 in the Big 12, and thrusting them right back into the middle of the regional hosting race. Kurtis Byrne (3-for-4 with an RBI double and an RBI single) helped to lead a pair of two-run rallies Friday to spot Marcelo Perez (5 IP, 1 H, 0 R) to a 4-0 lead, and relievers Caleb Bolden and River Ridings held off TTU’s late comeback bid.

Pittsburgh, like Virginia Tech, is making a serious run in the ACC, with three straight series wins (vs. Clemson, vs. Louisville, at Boston College) heading into this weekend. And the Panthers made some more noise on Friday night, cruising to a 9-4 win at home against No. 8 Virginia. Tatem Levins (3-for-4, HR, 3 RBI) led the Pitt offense in support of Matt Gilbertson (8 IP, 4 ER), and the Panthers broke a 2-2 tie with six runs in the sixth inning, taking advantage of a crucial error in right field that allowed three runs to score.

Pitt has won seven of its last nine ACC games after staring conference play 1-5. Virginia, meanwhile, is trending in the other direction, riding a five-game losing streak. This was also UVa’s third consecutive loss in a series opener with ace Nate Savino on the mound. The Cavs are suddenly just 9-7 in the ACC, while Pitt is up to 8-7.

Through eight weeks, no team in college baseball was more disappointing than Duke, a preseason Top 25 club that was mired at 13-20 overall and 3-12 in the ACC heading into a do-or-die home series against No. 10 Notre Dame this weekend. But the Blue Devils have risen from the dead before, and perhaps this is the start of another such run. Duke clinched the series with a 4-3 win Friday, tying the game on Luke Storm’s solo homer in the eighth and then winning it on RJ Schreck’s walk-off RBI single in the 11th. Marcus Johnson (6 IP, 3 ER) pitched well in a no-decision for Duke, which got stellar bullpen work out of Billy Seidl and Jimmy Loper, who combined for five innings of shutout ball.

Was any top-10 team safe on Friday night? No. 9 Louisville also fell victim to an opponent in dire need of a series win, as unranked Florida State cruised to a 9-4 win in Tallahassee, clinching the series. The Seminoles had lost seven of their last nine games entering the week, but they got back on track with a midweek victory against Florida, then notched a pair of convincing wins against the Cardinals over the past two days.

No. 6 Arkansas has bounced back strong from last week’s series loss at Florida, the Hogs’ first series loss since 2020. Arkansas has reeled off four straight wins since the back-to-back losses in Gainesville, clinching a big series against SEC West rival LSU with a 4-0 win Friday. Freshman Hagen Smith (7 IP, 2 H, 0 R, 1 BB, 7 K) turned in a gem for Arkansas, and Michael Turner (3-for-4, 2B, HR, 2 RBI) led the offense. All four Arkansas runs came via the long ball — a two-run shot from Turner and solo shots from Chris Lanzilli and Zack Gregory. But Smith’s excellence against an explosive LSU offense was the big story.

This might be the surprise of the weekend. Just when we thought No. 16 Dallas Baptist was about to make a run and assert its dominance in the Missouri Valley Conference, the Patriots stumbled twice in a row at Bradley, a team that entered the weekend just 9-17 overall. The Braves clinched the series Friday by overcoming a 3-1 deficit with four runs in the eighth, highlighted by Carson Husmann’s three-run homer. The Patriots have a very odd resumé that now includes series losses to Bradley, Wofford and SEMO, but series wins against San Diego, Sam Houston, Southern Miss, Oral Roberts, Maryland and Missouri State. Tough team to figure out.

Oklahoma State, which has won five straight weekend series and seven of eight series on the season, got off to a good start in a tough road test at West Virginia on Friday night. Ace Justin Campbell struck out eight in seven innings of shutout ball, and Nolan McLean hit a key solo homer in the seventh inning to lead the Cowboys to a 2-1 win against fireballer Jacob Watters (6.1 IP, 2 ER) and the ascending Mountaineers. WVU had won six straight games and back-to-back series at TCU and vs. Baylor heading into Friday.

McLean, a preseason All-American for his two-way talent, also nailed down the victory with a scoreless inning of relief.

We ask again: was any top-10 team safe on Friday? Here’s another big surprise: Kansas State, which entered the weekend 1-8 in the Big 12 and 15-16 overall, clinched a series against No. 7 Texas with an 8-1 win Friday, a day after taking down the Horns 8-5. Blake Adams (7 IP, 1 ER) and Blake Cosentino combined to limit Texas to just three hits, while Dominic Johnson homered and drove in three to lead the K-State offense.