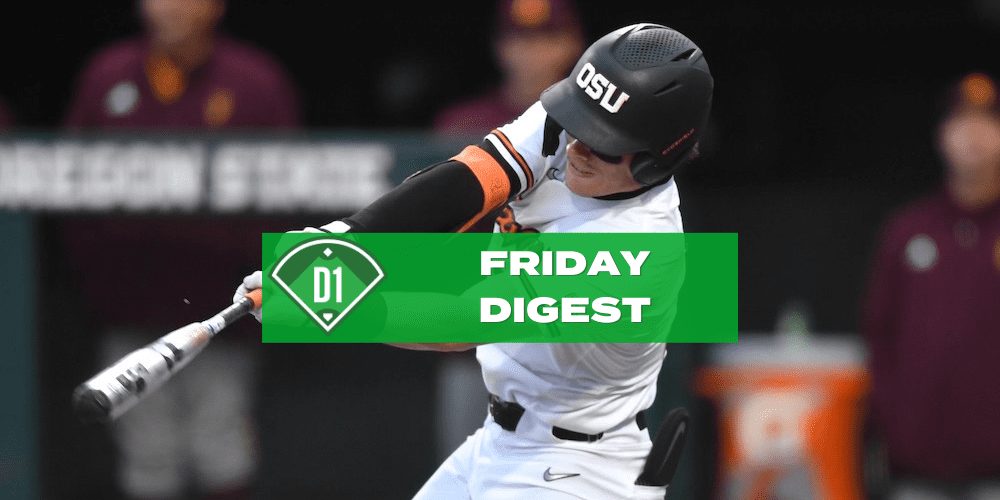 1 — Team of the Day: Louisville surges against Irish

Louisville entered the weekend with a 13-4 overall record, albeit it was a little unproven. However, one of the constant things we’ve heard about the Cards the first few weeks was they had a potent and physical offense. We got a good look at that offense Friday afternoon in a 16-11 win over No. 6 Notre Dame. Levi Usher, who has gotten off to a terrific start this season, hit a three-run home run in the first inning to set the tone, while Cam Masterman also hit a home run. Logan Beard and Jack Payton each added three hits apiece and Christian Knapczyk had a two-hit performance. Neither starting pitcher had a day to write him about — Irish starter Aidan Tyrell was lifted after allowing five runs in an inning, while Tate Kuehner allowed five runs in three innings of work. U of L has been looking for a marquee series win, and it is one more win this weekend away from accomplishing that goal.

Let’s give a hat tip to our esteemed colleague, Coach Michael Patrick Rooney. Coming into the season, he was sky high on Oregon State freshman second baseman Travis Bazzana for a good reason. Bazzana has made a smooth transition to big-time Division I Baseball, and he was explosive Friday night in a ridiculous 21-0 win over Arizona State. Bazzana got the Beavers started in perfect fashion in the first with a grand slam, and he finished the night with *checks notes* eight RBIs and three hits. Meanwhile, how about OSU lefthanded pitcher Cooper Hjerpe? He struck out 12 and allowed just one hit in seven scoreless. That’s about as dominant as one game can be.

What’s one way to bring a team back down to Earth? Apparently, it’s have them go face Old Dominion’s experienced and potent offensive lineup. ODU has gotten off to a torrid start offensively this spring, and it left no doubt on the road against Middle Tennessee in a 23-7 triumph. Middle Tennessee was coming off a series win over Auburn on the road, but in this game, the Monarchs went buck wild offensively with 24 hits and 23 runs with Matt Coutney and Andy Garriola leading the charge with two homers a piece and a combined eight RBIs. Get this, though: Middle starting pitcher Zach Keenan allowed 12 runs on 12 hits in four innings of work. We see you, ODU.

It couldn’t have been a better day for anyone who’s a fan of the Horned Frogs. A) The basketball team dominated their first game of the NCAA tournament against Seton Hall. B) The baseball team went on the road and silenced in-state rival Baylor, 3-0. Tip of the cap to TCU righthanded pitcher Riley Cornelio, who put together one of the best starts of his career in the win, striking out seven, walking one and allowing just two hits in eight shutout innings of work. Cornelio was a premier prospect out of high school, has faced some setbacks during his time at TCU, but showed plenty of huge upside during fall workouts. On Friday, we got a good look at that upside.

Though we always talk about the SEC for obvious reasons, you can’t help but to absolutely love how the ACC race is setting up this spring. The league is absolutely loaded with quality teams, and each weekend is going to be loaded with edge of your seat type of action. Well, two mild upsets occurred in the ACC on Friday night. First, Miami went on the road and defeated No. 18 Clemson 11-4. The big thing I was watching for in this game was Hurricanes starting pitcher Carson Palmquist. Palmquist struggled last weekend against BC, but he regained his footing in spectacular fashion, striking out 11, walking two and allowing three hits in 6.1 shutout innings … Down in the ATL, Wake beat No. 10 Georgia Tech, 5-3. Rhett Lowder allowed just two runs in five innings for the Deacs, while our resident crazy man Camden Minacci was nails out of the pen with five strikeouts in 3.2 innings of work. Check out man Minacci, below:

Usually, if a player threw a 10-inning complete game, I’d be wondering why he was still in the game to begin with. But not really in the case of Tennessee Tech righthanded pitcher Peyton Calitri. The Golden Eagles hit the road and beat East Tennessee State, 4-2. That’s good and all, but the story of the game was Calitri and the insane performance he put together. The righty struck out 11, didn’t walk anyone and allowed just two runs and five hits in a 10-inning, yes, 10-inning complete game performance. But here’s the catch: He threw 115 pitches — 80 (!!) of them for strikes. What a start … Speaking of gritty starts, Gonzaga righthanded pitcher Gabriel Hughes set a personal best Friday night with 13 strikeouts in six no-hit innings in a dominant 13-0 road win over Pacific.

7 — Georgia wins battle of the Bulldogs

We said earlier this week that this was an important series for both sets of Bulldogs. For Mississippi State, it was a chance to have a clean slate without righthanded pitcher Landon Sims. For Georgia, it needed a marquee series win after playing a lackluster non-conference weekend slate outside of single series against Georgia Tech, which it lost two of three. Georgia left little doubt Friday night in a dominant 11-0 win. Georgia ace righthanded pitcher Jonathan Cannon was marvelous in the win, showing an explosive fastball to go with a filthy slider. He struck out nine, didn’t walk anyone and allowed just three hits in eight shutout innings. MSU righthanded pitcher Preston Johnson put together a gritty performance, striking 10 and walking one, while also allowing four runs in six innings. Offensively, Ben Anderson had a huge game for Georgia, going two for five with a home run and four RBIs.

When Long Beach State is healthy, it’s absolutely a potential College World Series contender. But the Dirtbags received a scare last week when the talented righthanded pitcher missed his start because of some soreness. At the time, our Eric Sorenson reported that LBSU head coach Eric Valenzuela thought he would be back this weekend. Fortunately, he was back, as Ramirez struck out 10, walked one and allowed just two hits in seven shutout innings. We’re glad to see Ramirez back. Opposing hitters? Maybe not so much.

9 — Working our way around the SEC

It was Opening Night in the SEC outside of Ole Miss-Auburn, so let’s look at some of the results. Starting in Auburn, Sonny DiChiara hit an absolute bomb early and Blake Rambusch had four hits in a dominant 19-5 win over No. 1 Ole Miss … In Knoxville, Tennessee freshman righthanded pitcher Chase Burns continued to dazzle in an 8-3 win over South Carolina. Burns struck out nine, walked two and allowed a run on two hits in 6.2 innings of work … In Baton Rouge, the A&M bullpen finally rose to the occasion in a 6-4 win over LSU. Jacob Palisch gave the Aggies 1.2 innings out of the pen, while hard-throwing freshman righty Chris Cortez was up to 96 mph in 1.2 shutout frames to end the game … In Tuscaloosa, Alabama made this one a nail biter in the ninth inning, but the story of the game was Florida lefthanded pitcher Hunter Barco, who struck out 10, didn’t walk anyone and allowed a run on four hits in eight innings in a 6-4 win … In Fayetteville, righthanded pitcher Connor Noland struck out seven, walked two and allowed a run on six hits in 6.1 innings of work in a 6-2 win over Kentucky … In Nashville, Vandy’s Enrique Bradfield set the tone with a leadoff home run in the first inning. He finished the night with four hits and four RBIs, while starting pitcher Chris McElvain struck out eight and allowed two runs and two hits in six innings of work.

California has one of the premier pitchers in college baseball in Josh White. Unfortunately for White, he had one bad inning out of seven innings on Friday night. That one bad inning led to five USC runs as the Trojans captured a 6-2 victory in another important Pac 12 series opener. White was outdone by USC starting pitcher Jaden Agassi, who struck out three and allowed two runs on two hits in five innings. Offensively, Rhylan Thomas led the Trojans with three hits, while Tyresse Turner had a triple and three RBIs.