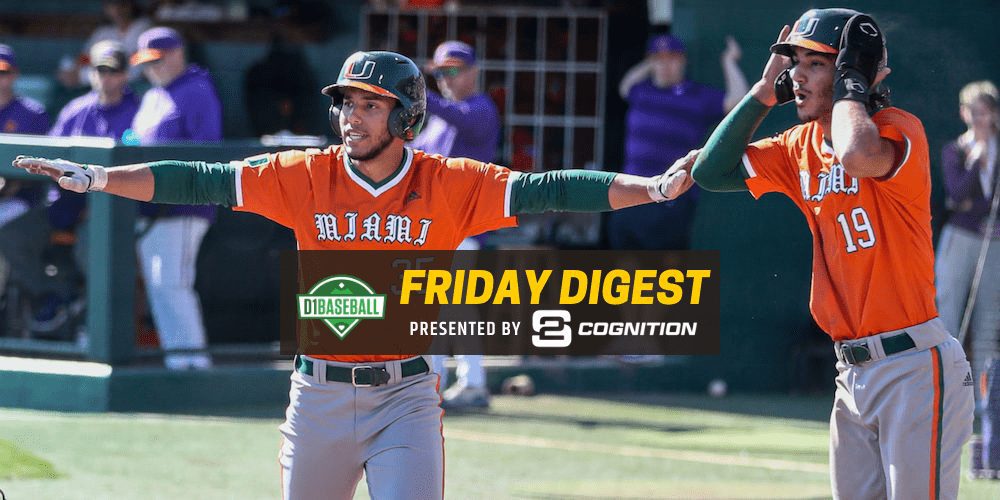 Low-slot lefthander Carson Palmquist and four Miami relievers shut down Virginia’s potent offense in a 6-2 win as part of the weekend’s only series between top 10-ranked opponents. Palmquist allowed only two base hits, both off the bat of Justin Rubin, three walks and a pair of unearned runs while striking out eight over six dynamic innings. In fact, outside of Rubin, the rest of the UVA lineup went 0-for-19 against the Hurricanes’ ace. Alex McFarlane, Rafe Schlesinger, Gage Ziehl and Andrew Walters combined to work the final three hitless, scoreless innings. Maxwell Romero Jr. and Gaby Gutierrez each had solo home runs while third baseman Yohandy Morales had the loudest day at the plate, hitting a go-ahead two-run shot that recorded 109 off the bat and later adding a rocket single smoked back up the middle.

Texas ace Pete Hansen enjoyed one of his best pitching performances of his collegiate career, tossing a complete game, two-hit shutout as No. 7 Texas beat No. 23 TCU, 2-0. Hansen faced just three batters over the minimum, striking out 12 Horned Frog hitters and inducing 11 groundouts in the win. Runs were clearly hard to come by, as the Longhorns manufactured single tallies in the fourth and seventh innings, the first on an RBI groundout and the second on an RBI fielder’s choice. D1’s Kendall Rogers was on hand for this game and has more Texas’ win here.

Mizzou certainly gave No. 1 Tennessee their best shot in Knoxville on Friday, as Luke Mann hit a two-run home run in the top of the first inning and the Tigers held a lead over the Vols until the bottom of the seventh. Jorel Ortega’s run-scoring double tied the game 3-3 and Cortland Lawson’s RBI single put Tennessee ahead for good. A three-run home run off the bat of Evan Russell as part of a four-run eighth gave Tennessee breathing room and the 8-3 victory. Tennessee freshman ace Chase Burns, who D1Baseball recently named the Top Pitcher and Freshman at the midpoint of the season, had the first rocky outing of his collegiate career, lasting just 2.2 innings while allowing two runs on three hits and four walks. That led to Tennessee clearing out their bullpen, as seven different relievers took the mound, striking out 11 batters and allowing just one run over the final 6 1/3 frames. By opening SEC play with a 10-0 record, winning their 21st game in a row as part of a 29-1 overall record, Tennessee has tied the 1994 Florida Gators for the best start in league play since the conference expanded in 1990.

4 – Gators Even Series In Convincing Fashion

One night after Connor Noland led No. 2 Arkansas to a dominant 8-1 win over Florida on Thursday, the Gators returned the favor with a convincing 7-1 victory of their own. Live-armed sophomore righthander Brandon Sproat set the tone over 5 2/3 dominant innings, allowing just one run on seven hits and a pair of walks, striking out five Razorback hitters. Sproat’s entire arsenal was working for him in this game, sitting in the mid- to upper-90s early and sustaining 93-96 mph heat into the sixth inning. His slider and changeup looked sharp as well as he effectively sequenced between his pitches to keep the ball off the barrels of a dangerous Arkansas lineup. Florida wasted no time making an impression at the plate, scoring a pair of runs in both the first and second innings, highlighted by Wyatt Langford’s first-inning solo shot, his 11th home run of the year. BT Riopelle added a solo shot in the third, his eighth of the year, in a two-hit, two-RBI performance. The two teams will play for the series win on Saturday.

5 – Beavers Remain At Top Of The Pac

Although both No. 11 Arizona and No. 15 UCLA are ahead of Oregon State in the Pac-12 standings, the fifth-ranked Beavers continue to be the team to be out west with a 9-1 win over USC. Most of the game was fairly close until Oregon State opened things up in the top of the ninth with a five-run inning highlighted by Jake Dukart’s bases-clearing triple. Cooper Hjerpe got the job done once more, tossing six shutout innings while allowing just four base hits with nine strikeouts to move to 7-0 on the year; Hjerpe now has a 77-to-10 strikeout-to-walk ratio in 47 2/3 innings and a 1.70 ERA. In other Pac-12 action, Arizona lost a game in the standings after Washington State got the best of the Wildcats, 11-5. Utah carried a 5-2 lead into the eighth inning until UCLA tied things up with a three-run frame, eventually sneaking past Utah, 6-5, in 10 innings. Keep a close eye on Stanford whose resurgent ways continue after beating Arizona State, 8-0. Alex Williams tossed a three-hit complete game shutout as the Cardinal have now won six of their last seven Pac-12 contests.

It’s no easy task to beat Louisville by out-scoring them, but in most cases that’s what you need to do to record a W against the high-powered Cardinals. No. 22 North Carolina pounded out 17 base hits, nine of which went for extra bases, in their 13-9 win over No. 12 Louisville. Six different Tar Heels had multi-hit games, and two of those – Nos. 7 and 8 hitters Alberto Osuna and Hunter Stokely – had four-hit performances. The biggest day belonged to Osuna, who went 4-for-4 with three runs scored and six driven in, hitting a two-run homer in a five-run first, a two-run double in a three-run third and another two-run homer in UNC’s three-run fourth. Louisville slugger Cam Masterman hit his 10th home run of the season, a three-run shot, in a four-RBI performance.

Lefthanded ace Parker Messick had his shortest outing of the year, giving up six runs in 2 2/3 innings, as Georgia Tech jumped out to a commanding lead to cruise to a 7-3 victory. Chandler Simpson, who missed the second half of March due to injury, hit a leadoff single in the bottom of the first before Kevin Parada launched a two-run shot – his first of two home runs in the game – that gave the Jackets an early lead. They tacked on four more runs in the third, capped by Simpson’s run-scoring double as part of a three-hit performance, before chasing Messick from the contest. Three-hole hitter Andrew Jenkins also enjoyed a big day at the plate, going 5-for-5 with a double. Chance Huff moved to 3-1 on the year by striking out eight FSU batters in six innings, allowing just one, unearned run. Zach Maxwell picked up the save by striking out the side with some serious heat in the ninth.

In addition to Florida taking down No. 2 Arkansas in Game 2 of their three-game series, two other unranked SEC teams beat their ranked opponents on Friday: Alabama out-scored No. 9 Ole Miss 7-4 and Auburn took down No. 16 Vanderbilt 5-1. Bama starter Garrett McMillan did a good job to subdue the Rebels offense over the first seven innings, allowing two runs on just three hits and three walks with seven punchouts. For Auburn, Brooks Carlson’s third inning three-run home run proved to be all the offense the Tigers would need on this day, while Hayden Mullins, Carson Skipper and Blake Burkhalter combined to allow just two hits, striking out 15 Commodores along the way. The win was Head Coach Butch Thompson’s 200th at Auburn. Both No. 14 Georgia and No. 19 LSU avoided similar fates with rallies in the top of the ninth that led to wins at South Carolina and Mississippi State, respectively. LSU’s comeback was especially loud, as Dylan Crews’ two-run home run followed Tre’ Morgan’s go-ahead two-run single in a 5-2 win.

There were plenty of other upsets involving Top 25-ranked teams on Friday outside of the SEC. Oklahoma’s bullpen kept the Sooners in the game with four scoreless innings leading up to a pair of two-run frames in the seventh and ninth innings to take down No. 6 Oklahoma State, 8-7. Georgia Southern never gave up against No. 10 Texas State, scoring a single run in the top of the ninth that forced extra innings, adding another run in the 10th and three more in the 11th to beat the Bobcats, 7-4. Coming off a series win over a ranked North Carolina team a week ago, Virginia Tech continued to prove they’re a force to be reckoned with in their 21-10 victory over No. 21 NC State. The Hokies exploded for 11 runs in the seventh inning, which included a two-run home run by Gavin Cross and three-run blasts by both Cade Hunter and Carson DeMartini.

UC Santa Barbara continued its early season surge in the Big West with a 13-10 win at CSUN to move to 19-8 overall and 8-2 within the conference. Bryce Willits was 4-for-5 with a double, two homers and seven RBIs. UCSB’s Big West rival, Cal Poly, remains red-hot with a 4-1 win over Long Beach State. Drew Thorpe’s dominant sophomore season continues, moving to 5-0 on the year and adding five punchouts in seven innings, giving him 80 in 54 1/3 on the season. After taking its series at TCU last weekend, West Virginia beat Baylor on a pair of bases-loaded walks, the first of which came in the eighth inning to tie the game and the second of which walked it off in a 7-6 victory. Liberty enjoyed a loud ASUN win over Florida Gulf Coast in Game 1 of their series with an 11-3 victory. Aaron Anderson and Derek Orndorff both enjoyed three-hit games in the process. After sweeping Nebraska in Lincoln a year ago, Rutgers put another road win on the board with a 7-5 victory over the Huskers. The top of the lineup continued to be relentless as leadoff hitter Ryan Lasko hit a pair of home runs in a three-hit game and Nick Cimillo had a pair of base hits, one of which was a dinger, and three RBIs. Rutgers starter Jared Kollar moved to 6-0 on the season for the 23-6 Scarlet Knights.