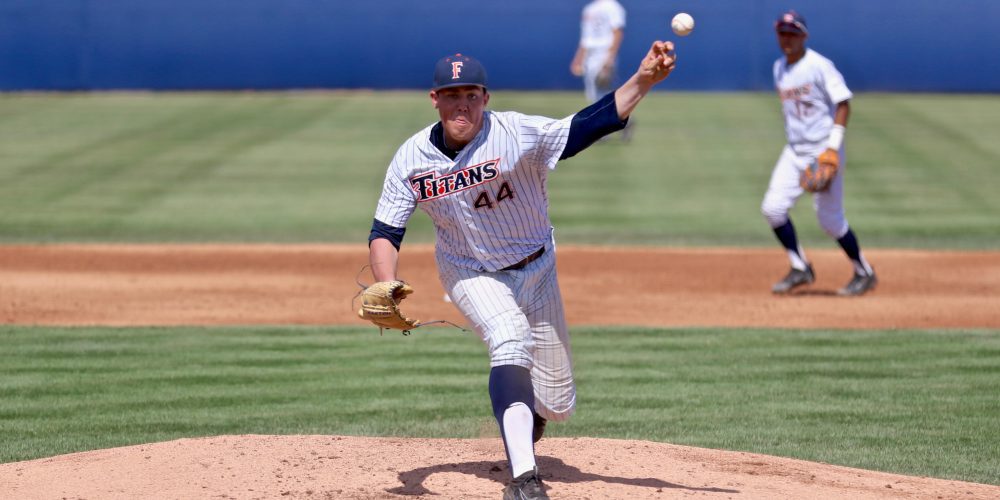 John Gavin couldn’t believe it when he was told that his 14 strikeouts on Sunday were the most by a Cal State Fullerton pitcher since Thomas Eshelman accomplished the feat in a regional matchup with Arizona State in 2015.

Gavin looked up to juniors Eshelman and Justin Garza as a freshman. Now he has become part of his own elder-statesman duo with Connor Seabold after producing a career day against a hard-hitting New Mexico team.

Gavin (3-0, 1.65) pitched eight innings, giving up just two singles while besting his career-high strikeout mark by six punchouts. He surpassed his previous career high in the fifth inning after he struck out the side in an inning for the second time. Both hits were by Luis Gonzalez, whom Titans head coach Rick Vanderhook said was the best hitter he’s seen this year, making Gavin perfect on the day when he wasn’t facing a guy hitting .447/.542/.750 following Sunday’s game.

Other than against Gonzalez, Gavin was on fire, throwing his 89-91 mph fastball inside and out and using it up in the zone for effect when needed. He relied on it 71 percent of the time during his career-high 123-pitch outing — only his third time hitting the century mark in his Titan career.

“He had a great fastball and it was running away off off the plate. We couldn’t catch up to it,” New Mexico head coach Ray Birmingham said. “Then he would come back in with it and he had enough offspeed command to keep us off-balance. He struck out 14. That’s never happened to me.”