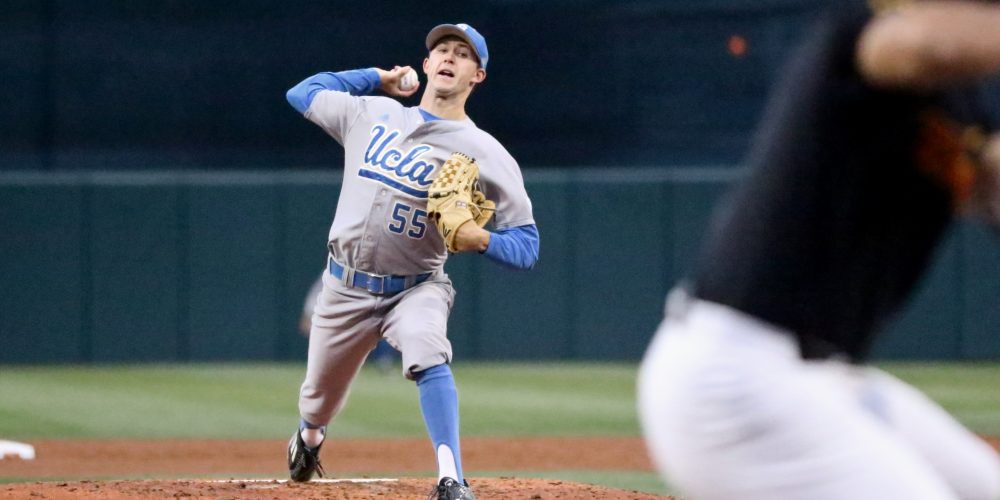 Canning Puts On A Show

LOS ANGELES — USC second baseman Brandon Perez took one step toward first base and began to toss his bat when he heard the seventh inning strike call ring through the air. He looked back in disbelief before turning his gaze to the sky and rocking back to the batter’s box.

It was a singular strike call, but it may have changed how a Thursday night rivalry game played out at Dedeaux Field.

Instead of a base on balls putting two runners on with no outs in a two-run game, Perez faced a 3-2 pitch against UCLA ace Griffin Canning. The runner from first took off as Canning delivered home and Perez showed a good two-strike approach, going with an outside pitch. He hit a tailing line drive that seemed destined for the right-center field gap and possibly even extra bases with UCLA center fielder Brett Stephens shaded to the left field side of second base before the pitch.

Without hesitation or false step, Stephens broke for the ball and was two steps into a full sprint before the ball ever made it’s way over Canning’s head. He covered at least 12 strides before laying out to make a diving catch, sending the runner scurrying back to first.

Brett Stephens makes a spectacular diving catch in center field for the 1st out of the 7th inning!#GoBruins pic.twitter.com/esdh2C4cFx

USC head coach Dan Hubbs called the catch the play of the game.

“If he doesn’t catch that ball, it’s second and third, nobody out and I’m going to take my chances that we’re going to score at least one, if not two and then who knows what happens.”