TCU righthander Luken Baker and Houston first baseman Joe Davis are a pair of freshmen that really stood out amongst Saturday's action in Houston.

HOUSTON — There was a buzz for hours, even days in advance, followed by a bang, followed by the collective “FWOAH” of shocked onlookers. Like when the frat boys down the street pool all their cash to buy fireworks, and you’re waiting for them to set off the big one, the device that comes in a huge, sterile-looking cardboard tube and carries a warning that it is not to be discharged within such and such a distance of an airport.

Or, when an enormous towheaded teenager, holding a bat like a pencil and standing astride the batter’s box like the Colossus of Rhodes, jumps on a 2-0 pitch from Ricardo Salinas and hits the base of the light stanchion in left center field at Minute Maid Park.

That’s Luken Baker, the 2015 national high school player of the year, in his highest-profile college action to date, delivering (so far) the marquee performance of the weekend in the stadium he’d visited frequently as a child.

“It was awesome,” Baker said. “All my family and friends from home are here, and Minute Maid Park is the park I grew up coming to baseball games in. I love every part of it, and being able to come out here and perform like I did—just to be able to play here—was pretty awesome.”

Baker, impossibly, doesn’t even turn 19 for another two weeks, but at 6-foot-4, 265 pounds, he looks every bit the imposing two-way behemoth. On the mound, Baker was impressive, if not unhittable: six innings, four hits, seven strikeouts, no walks, one hit batter. His fastball sat 91-93 and touched 94, while mixing in a slider and leaning heavily on his changeup.  Though Rice didn’t score, the Owls were able to barrel his stuff up a couple times–notably fellow freshman Ford Proctor on a fourth-inning double–and Baker had to work out of trouble in the fourth and fifth innings.

“I thought he did a really good job of throwing all three pitches for strikes,” TCU head coach Jim Schlossnagle said. “He has a good arm. He can run his fastball into the mid-90s but from the second we started to recruit him, he’s a better pitcher than he is a power pitcher.”

At the plate, he was 1-for-3 with a walk, two runs scored–which means he generated all the offense he needed to win all on his own–and that home run.

“I think that was the hardest one I’ve ever hit, in my opinion,” Baker said. “It looked cool either way. It felt good, and I’m glad it happened.”

Baker had help, even though he didn’t need it, not only in the form of good defense, but in the form of a starting lineup in which eight players reached base and seven scored, which is even more impressive considering that, thanks to the mercy rule, only five TCU hitters came to the plate four times. Elliott Barzilli continued his tear, going two-for-three with a home run that hit about 20 feet lower on the left field archway than Baker’s, and three different Horned Frogs stole bases.

But the star of the show was Baker, whose two-way dominance was so comprehensive–and more than that, indicative of innate physical tools and coolheadedness under pressure the likes of which coaches spend a lifetime trying to recruit–that it had to stand out.

“If you’d have polled 30 teams, probably half of them liked him as a hitter and half liked him as a pitcher, and you saw why tonight,” Schlossnagle said.

Schlossnagle put immense faith in his immense true freshman by making him not only his cleanup hitter, but a weekend starter as well, and Baker’s performance tonight certainly validates that faith.

“It’s awesome,” Baker said. “It just shows the product of all the work that I’ve put in over the years, and the great coaching staff here that’s taken what I’ve been able to do and multiply it by so much. I’m just glad I have the opportunity and I’m gonna keep working to capitalize on it.”

The Apotheosis of Joe Davis

There’s a great tradition in college baseball of the beloved slugger with the Matt Stairs body. There’s usually at least one player, usually playing one of the corners, who looks like a powerlifter and does nothing but hit the bejeezus out of the baseball, to the delight of fans across the country. Last year it was D.J. Stewart, the year before that Kyle Schwarber, and so on. Houston might have been forgiven for hoping that Joe Davis, a roughly cubical 16th-round pick by Tampa Bay, would blossom into that kind of player eventually.

Davis, however, doesn’t seem much interested in waiting around. 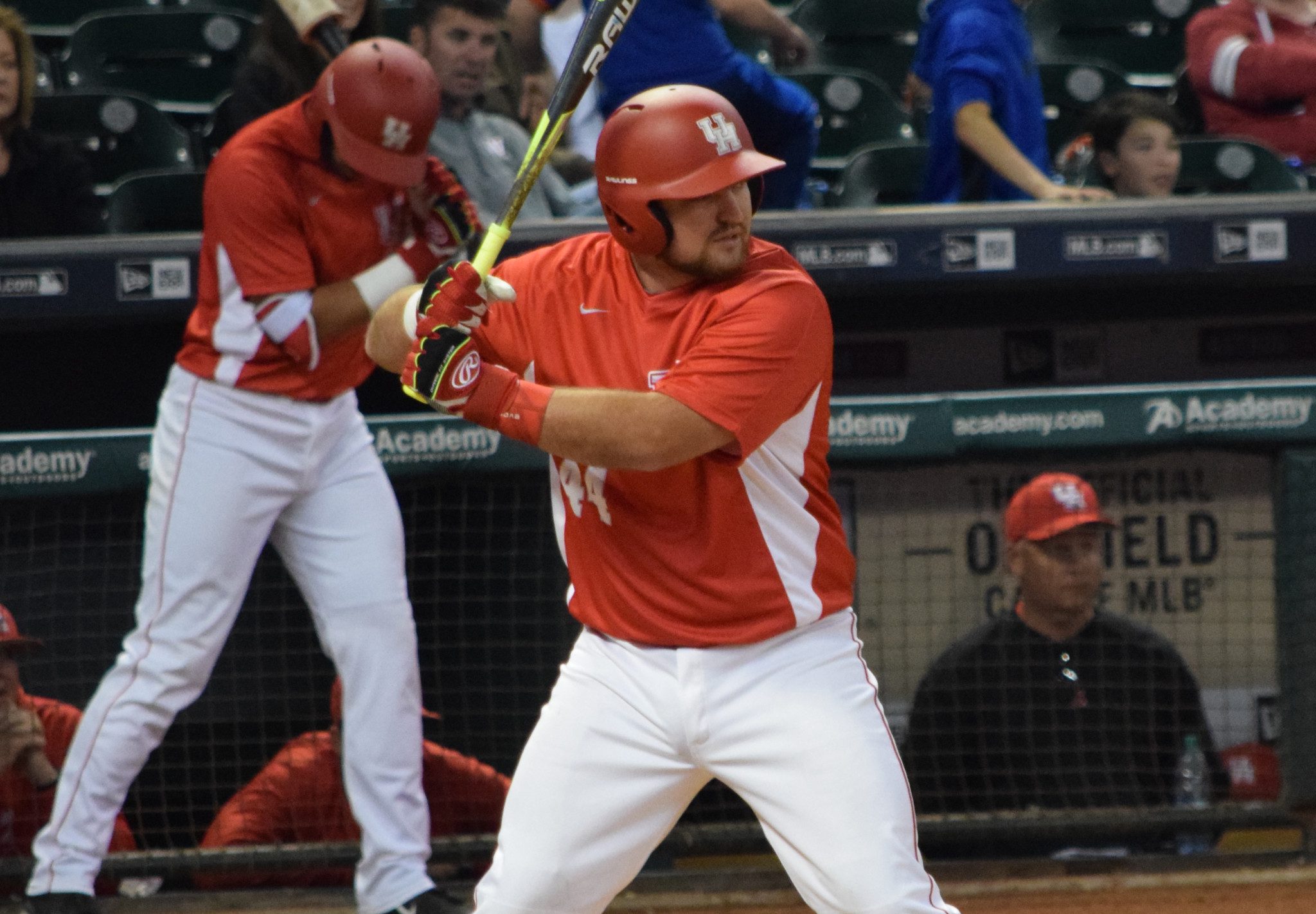 On a night when seven Arkansas pitchers held Houston mostly in check in a 12-3 win, Davis accounted for four of the Cougars’ 10 hits and six of their 14 total bases. His 4-for-4 outing, which included two absolutely scalded doubles, boosted his season batting average to .636.

“He’s a pretty advanced player for a freshman,” Houston coach Todd Whitting said. “I have a lot of trust in him. Obviously, I put him in the three-hole, so it’s not a surprise. That’s what we signed him to do and he’s fulfilling all expectations right now, so hopefully he can keep it going.”

Davis, listed at 6-foot, 230 pounds, hits with a slightly open stance, back elbow cocked high, back foot on the inside chalk of the batter’s box. It’s a stance that communicates power, and while many hitters–even great line-drive hitters–have a swing designed to lash out at the ball, or paddle it, Davis goes up there like a man who aims to fell a tree.

Of course, power alone won’t get you very far, and Davis displayed impressive plate discipline while working a ninth-inning walk. Davis, representing the last out of a nine-run blowout loss, worked a seven-pitch walk, spitting on a couple low breaking balls when he could be forgiven for wanting to just go home. It was a patient, disciplined at-bat that belied his relative inexperience.

“He’s just a confident kid,” Whitting said. “He thinks he can hit, and he can hit. The mindset’s a powerful, powerful thing and he’s got a lot of confidence right now.”

As it turns out, he has every right to be confident.

Tony Robichaux’s Metaphor Of The Day

After starting 3-0, Louisiana-Lafayette coach Tony Robichaux wanted to leave the Houston College Classic with a 5-2 record, if not 6-1. But after losses to TCU and Texas Tech, and a midweek loss to Louisiana Tech, Robichaux’s men need to beat Rice in Sunday’s nightcap to leave Houston with even a .500 record.

ULL fought back from two different one-run deficits, and took the lead in the seventh, but gave the game away with poor middle infield play in the ninth and 10th innings, providing yet another example of how, in college baseball the team that makes the fewest mistakes wins most of the time.

With a one-run lead, the bases loaded and one out in the top of the ninth, freshman shortstop Hunter Kasuls–elevated from the nine-hole on Friday to the leadoff spot against Texas Tech, where he went 0-for-5–fielded a ground ball and locked up. His two options at cutting off the tying run, a force at home and a game-ending double play, were both extreme long shots, but by the time he looked to third base, Zach Davis was most of the way there, and by this point his throw to first drew Stefan Trosclair off the bag, and probably wouldn’t have been in time anyway after he’d taken so long to decide on a course of action.

Kasuls was pulled in favor of his platoon mate, Brad Antchak, for the top of the 10th. Antchak booted the potential inning-ending ground ball, which gave Texas Tech new life and allowed the eventual game-winning runs to score.

There go your two critical plays.

Robichaux recognized that Kasuls and Antchak need time to grow into the shoes vacated by Blake Trahan–and what enormous shoes those must be–which led to the following comment about not only his shortstops, but his young players in general.

“They’ve got to try to relax and do what they do in practice,” Robichaux said. “Not come up to the ball to try not to miss it, but to come up to it to catch it, and try to relax. That’s the whole key to this. Like I’ve said before, you can’t teach somebody to fly an airplane in a simulator for his whole life and never put him in the plane.”

Right now, that airplane’s struggling to gain altitude, but Robichaux sees it all as a learning process.

“We’ve got to continue to grow,” Robichaux said.”That’s what we came here to do, win, lose or draw. Every year is a different year. We’re not the same team we were last year. This is not the same team that was in the regionals. We’ve got to forge our way, just like that team did. It forged its way into that team. We’d like to do it early if you can, believe me–you don’t want something like this to get away from you, but you know what? The more pressure it applies to us, and the more weathered we can get getting through stuff like this, hopefully that’ll help us in the long run at the end of the season.”

Robichaux is by no means happy with his team’s unexpected three-game losing streak, but whatever the outcome of the tournament finale against Rice, he views games against the three big Texas schools as an important diagnostic for a team that’s still finding its footing.

“If we’d been playing a bad team back at home today, you’d probably overcome that right there, and you’d probably win and start to believe that you’re really good,” Robichaux said. “But now we get to really understand the difference between when you don’t make the critical play at a critical time of the game when you play very good teams.”

And for the future?