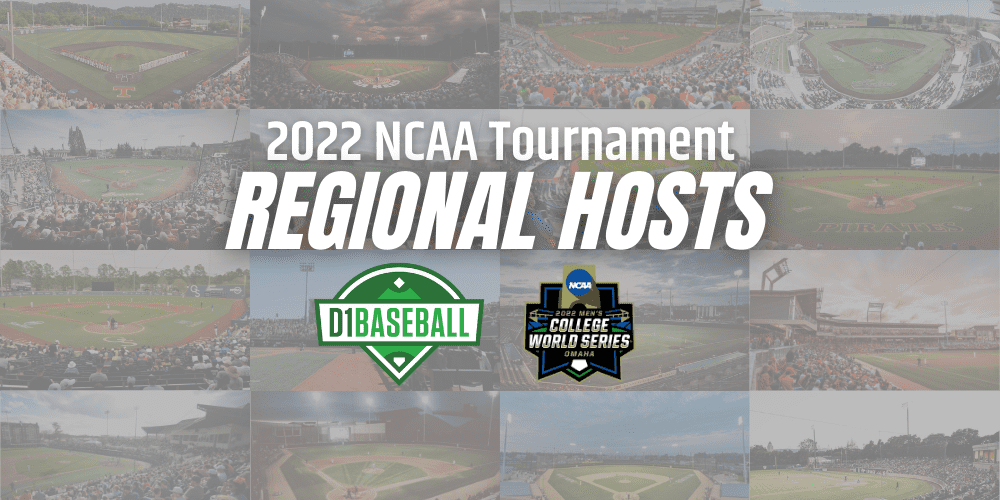 Each of these teams will host three other clubs in a double-elimination format. The complete field will be announced on ESPN2 Monday at noon, ET.

We do not know the seeds but we have to assume all of these teams will be number one seeds. All 16 of these teams bid to host. Maryland plans to host on-campus with temporary seating and other amenities added.

The biggest snubs include Notre Dame, TCU, Oklahoma, and LSU.

Notre Dame has a number 14 RPI and finished fourth in the ACC. The biggest knock is its non-conference strength of schedule (195). Notre Dame played well in Charlotte going 2-1 losing to North Carolina in the semifinals, and D1Baseball projected them to host. This is the second consecutive snub for the Irish. Last season they dominated the ACC and were not awarded a top-eight seed, eventually facing off with eventual champion Mississippi State in Starkville. This season, Notre Dame will start their postseason on the road.

TCU won the Big 12 regular season, finishing ahead of hosts Oklahoma State and Texas. Power conference teams are usually easy hosts, so their exclusion is a precedent setter. The Horned Frogs saw their RPI plummet in recent weeks and it settled at number 36 today. Teams outside the RPI top 25 rarely host, but those usually didn’t win the third-rated conference. While UCLA hosted as a Pac-12 champ in 2011 with a 34 RPI, the Frogs didn’t have enough else on their resume to offset their poor RPI.

Oklahoma has been on a strong run at the close of the season and rolled through the Big 12 Tournament undefeated. They led Texas as the host sites are announced, but their number 24 RPI heading into that game was likely a problem. It is interesting that the host sites are announced with half of the power four conference tournaments still underway.

LSU was bypassed for Auburn for a host site. Auburn won a head-to-head series in Baton Rouge earlier in the year, but LSU finished a half-game ahead in the standings. The RPI was also a differentiator. Auburn is at number 14 while LSU is at 25.

Auburn’s inclusion may surprise some. We had projected Notre Dame instead of Auburn.

The resumes are pretty similar, with Auburn having a sizable edge in non-conference strength of schedule and record against the back half of the RPI top 100. Notre Dame excelled against teams 26-50. The other factor is balancing the hosts between the ACC and SEC. As the top two RPI conferences, Auburn getting the nod here gave each conference four hosts.

Wake Forest (6) and Vanderbilt (7) have top ten RPI ranks but were not selected as hosts due to their conference records. Traditionally, if a team has a good RPI and a mediocre conference record, it can host by boosting that aggregate conference mark in the conference tournament. Florida and North Carolina are examples of this.

Wake Forest’s number 6 RPI is the best RPI for a non-host since the field expanded to 16 regionals in 1999. Note, Fairfield was technically number 2 RPI last season but their schedule was not interconnected due to conference-only scheduling, invalidating it for comparing those teams.