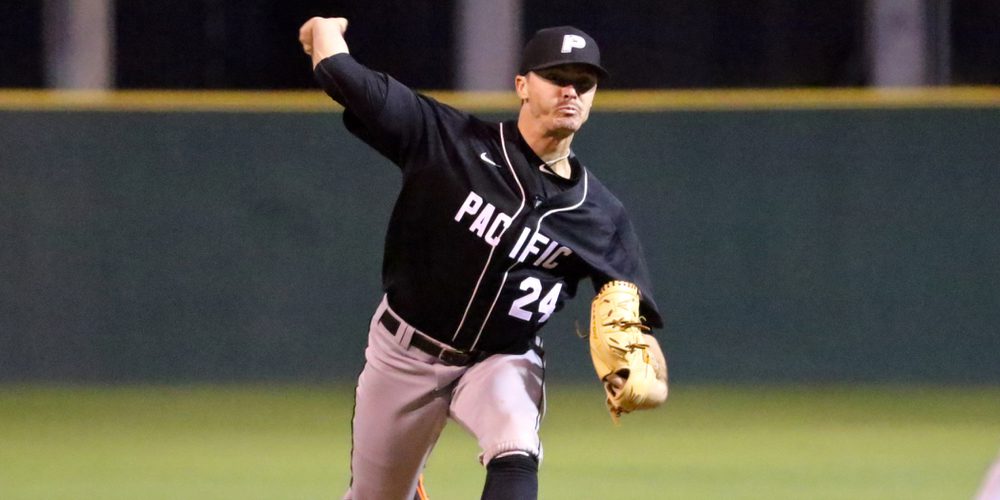 Senior righthander Will Lydon picked up the win (Shotgun Spratling)

The Tigers added 19 newcomers to the roster this season. In the first two games, he has already started three true freshmen and two junior college transfers playing for the first time. With the fresh faces, there are going to be times when Pacific goes through significant growing pains like on Friday when the Tigers gave away several extra bases. They failed to catch fly balls in a windy environment, walked five batters and committed a pair of errors. The routine plays became difficult. The difficult plays became impossible.

“We played so poorly in the first game that we just had to turn the page,” Neu said. “I think we did almost everything wrong we could do, but if it’s Game 1 of the year, we can probably live with that. Our guys did a good job really just going game to game. We played much better.”

On Saturday, Pacific put the pressure on San Diego State, earning the extra bases instead of giving them away in a 5-1 win at Tony Gwynn Stadium. The Tigers scored in each of the first three innings — always with two outs — and rode the veteran arms of Will Lydon and Vince Arobio to even the series. Three of their five runs reached base via base on balls or hit by pitch and a failed diving attempt in right field set up their final run of the game.

With such a broad collection of new faces, the Tigers are relying on a core group of veterans to lead on and off the field, teaching the youngsters the culture that Neu has tried to establish in the last two years. One of the most important returnees is Lydon, a senior righthander who is one of the team’s emotional leaders.

A two-year Friday night starter, Lydon has been pushed back to the Saturday role with the emergence of converted position player Shelby Lackey and his fastball that touched 95 mph several times in the season opener. Rather than starting off the weekend, Lydon is now the Saturday swingman.

“We knew this would be a swing day,” Neu said. “Our Friday guy this year has some pretty good stuff and he’s got a chance to win, but if we lose, Will gives us a great chance. He’s one of the hardest workers on the team. He prepares. Any information that I give him, he takes it and he tries to use it to his advantage. He’s going to work on anything that we get a chance to work on.“

Lydon pitched 6.2 innings, allowing seven hits and one unearned run coming in the seventh inning when he began to lose steam and his fastball dipped from the 88-91 mph it had been the fist six innings down to 85-88 with a couple of 89s. Throughout his outing, Lydon was able to run his fastball in on the hands of the San Diego State hitters to get ground balls, mixing in a 79-80 breaking ball and the occasional 82-85 changeup to tally 11 groundouts compared to two fly ball outs and three infield pop ups.

“The first thing I did was put full trust in my team,” Lydon said. “I trusted everyone behind me. I’ve had a whole long three years behind me and I’m just trying to forget about that and trust the team. We’re all playing together. Today I just had my fastball command and my mentality was just that I was going to get everyone out and that’s exactly what I did.”

“He threw a lot of strikes. That’s kind of Will being Will,” Neu said. “He’s around the zone. He competes. He’s not going to flash anything that’s going to be completely devastating, but he’s going to be above-average with everything he does. And he’s a senior, so he’s kind of been in those spots before. Even when he got in a couple of jam situations, he made some big pitches when he needed to.”

Lydon struck out Chase Calabuig to strand two runners in scoring position in the fifth inning and got a meek grounder to second base to leave the bases loaded in the sixth inning. As he came off the mound, he let out a roar worthy of the team’s feline mascot. When asked about the emotion he had displayed, Lydon chuckled.

“When I’m yelling, I don’t mean to. It just kind of comes out. I’m trying to be the best leader that I can on this team and I’m trying to lead by example. I believe that this is a team that can make it to playoffs this year and I’m going to try to lead them there.

“With the new guys, I’m just trying to take them under my wing and show them what Pacific is all about. We’ve had a rough past couple years, but that’s not what we’re about. We’re about winning and winning every day. Competing and competing every day and that’s what I’m trying to show them.”

In the past, Lydon’s emotions have some times been to his detriment as he can get too amped up, but that’s an area he has focused on in the offseason. The mental aspects of pitching in big situations is where Lydon believes he’s made the most strides leading into this season. Rather than trying to reach back for a little extra on a fastball, Lydon has learned how to slow the game down and make his best pitches when they are needed most.

“Before he was just kind of throwing and trying to just overmatch guys with not quite the stuff to do that,” Neu said. “Now he’s kind of pitching and learning how to give and take and just kind of work around the zone. Then just see what swings guys have and how he can attack those. He’s done a good job and he’s progressed.”

In the first inning, Pacific took advantage of free passes to take a quick lead it would never relinquish. San Diego State starter Harrison Pyatt was off to a good initial frame after striking out Matt Tarantino and getting ahead of Nate Verlin with a 1-2 count. But his attempt to come inside for a second strikeout bared farther inside than desired and plunked Verlin. The next batter produced an opportunity for Pyatt to get a strikeout, but Danny Mayer was patient enough to a take a full-count walk.

Instead of the three possible strikeouts, Pyatt was in a jam with two men on. The second strikeout finally came when Lucas Halstead went down swinging, but Ryan Schalch attacked the first pitch he saw and lined an RBI single to right-center field. Another full count went Pacific catcher James Free II’s way. Pyatt again couldn’t finish off an at-bat. Free drove the ball into the right field corner bringing home two runs, giving the Tigers an early cushion they would not relent.

“Our starting pitching wasn’t good enough tonight,” San Diego State head coach Mark Martinez said. “We gave up for sure three free bases early on and they all scored.

Pacific head coach Mike Neu talks about the Tigers’ first win of the season and the performance of starting pitcher Will Lydon:

San Diego State head coach Mark Martinez talks about the Aztecs’ 5-1 loss to Pacific, the importance of starting pitching and the focus on details this season:

Pacific righthander Will Lydon talks about his strong outing in his season debut against San Diego State and what he has added to his game to become more of a leader as a senior this season.

– Pacific is a young team that will need to continue to progress throughout the season as it gets experience, but veterans like Will Lydon, Vince Arobio and Danny Mayer can help lead the team until first-year guys are ready to make an impact.

– To compete in the Mountain West, San Diego State needs its starting pitching to perform. The Aztecs have a strong lineup, but it will be hard to win slugfests every night.