Florida State's Quincy Nieporte hit a walk-off homer to beat rival Florida, while the Missouri Valley and others had Tuesday's to remember.    Baumann on Louisville-Ohio State

Nieporte, who had gone 0-for-5 against the Gators in the contest before that at-bat, smacked his third home run of the season, while third baseman Dylan Busby led the offensive charge with three hits — two of those homers — two runs scored and two RBIs. Meanwhile, the FSU bullpen was just terrific against Kevin O’Sullivan’s Gators. Dylan Silva replaced starting pitcher Bryant Holtmann after 5.1 innings and was stellar, allowing no hits in 2.2 innings, while Billy Strode closed out the contest by allowing just three hits in four shutout frames. 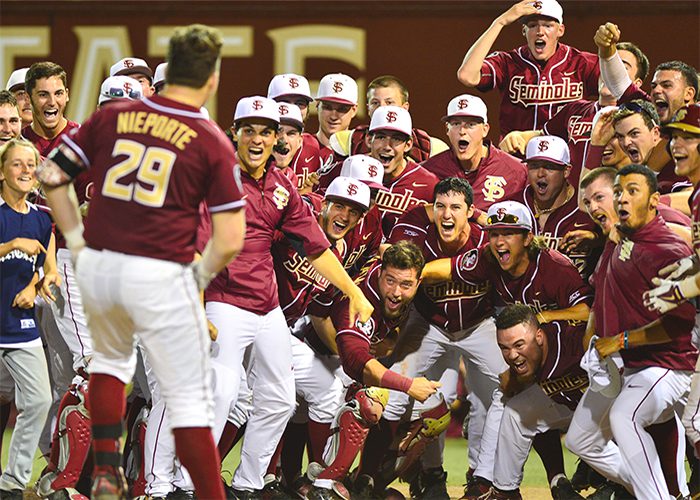 In addition to Nieporte and Busby, the Seminoles also got a fourth home run in the contest from Chris Marconcini, who went 2-for-5 with a solo homer. While the Gators ended the night on the losing side of the ledger, freshman catcher JJ Schwarz hit his 13th home run of the season, tying Arkansas outfielder Andrew Benintendi for the national lead.

“Our guys really showed from the beginning of BP today a little something that I hadn’t seen all year, they weren’t happy,” Florida State head coach Mike Martin said. “This ballgame tonight is certainly not going to make or break our season but it’s certainly important for a young club like this against a team that is extremely good. They did a heck of a job and it was a good ball game.”

Missouri Valley Conference: We’ve talked plenty about the MVC so far this season with Dallas Baptist playing at a high level, as well as Missouri State and Bradley. But how about the night the league had on Tuesday with a few key victories … In Terre Haute, Ind., Indiana State took care of business in a 6-2 win over Indiana. ISU outfielder Jacob Hayes hit a three-run home run in the third inning to lead the way … Like in Terre Haute, a key home run was the decisive blow in Bradley’s 5-4 home win over red-hot Iowa. Bradley outfielder Isaac Smith hit a three-run home run in the third inning to set the stage for the night despite having to come back later in the contest after the Hawkeyes rallied. Bradley’s RPI, by the way, remains in the top-10 nationally … Dallas Baptist added another quality win to its resume with a 7-5 road victory over Oklahoma. DBU catcher Daniel Salters, who has struggled this spring, led the way with four hits, while Nash Knight had a hit and two RBIs.

San Diego State: We will have the Aztecs projected to win the Mountain West automatic bid in this week’s projections, but should that bid fail, there’s no doubt they’ll need to accumulate impressive wins the rest of the season to make the postseason field. The Aztecs took a step forward Tuesday night by storming back to beat UC Irvine 4-3, getting a walk-off RBI single from Ty France in the ninth inning to beat the red-hot Anteaters. SDSU leadoff hitter Chase Calabuig had a nice night at the plate with three hits, while Andrew Brown added a pair of hits.

Ohio State: The Buckeyes might have had a good RPI and overall record before Tuesday’s game against Louisville, but they had yet to make a statement on the national stage. A midweek game is a midweek game, but we’re still very impressed with OSU’s 2-0 win over sizzling Louisville. The Buckeyes banged out 12 hits with Ronnie Dawson and Troy Montgomery each collecting a pair of hits, while 6-foot-3, 205-pound righthander Adam Niemeyer was the story, striking out three, walking one and allowing just two hits in five innings … Our Michael Baumann has more on Ohio State’s win over Louisville in this feature.

#SCTop10 @SurgieeBaby dives and throws from his knees across the diamond for the WEB GEM. What a play. http://t.co/TlOd1QAhfJ #GoBucks

College of Charleston: The Cougars were very much in the mix for the D1Baseball Top 25 this week, but we gave the slightest of edges to UNC Wilmington. C of C, though, just continues to win, hitting the road Tuesday night and capturing an 8-3 win over ranked Coastal Carolina. Cougars starting pitcher Nathan Helvey struck out five and allowed two runs on four hits in five innings, while outfielder Morgan Phillips went 2-for-4 with two RBIs, and Bradley Jones hit his sixth home run of the season in the victory. 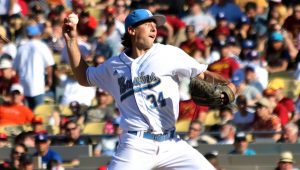 UCLA: It’s like the domination tour for the Bruins right now. After taking two of three from rival USC this past weekend, the Bruins got back to work Tuesday night in a 7-2 win over Cal State Fullerton. UCLA righthander Cody Poteet started the contest and struck out three in three hitless innings, while outfielder Brett Urabe led the offense, going 2-for-4 with a double a run scored and an RBI. The Bruins are now 26-7 overall and looking terrific entering the second half of the season. 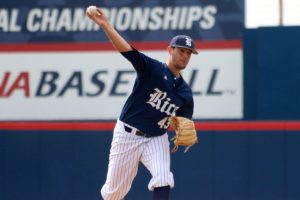 Rice: The Owls haven’t lived up to their potential lately, dropping a surprising road series to UAB last weekend. But they rebounded in quite impressive fashion on Tuesday, destroying rival Houston 11-0 to even that season series. Rice starting pitcher Austin Orewiler struck out 11, walked one and allowed just two hits in six innings, while talented freshman righty Glenn Otto also put together an impressive outing out of the pen. Meanwhile, the Owls banged out 11 runs on 16 hits with second baseman Ford Stainback going 4-for-5 with a double, two runs scored and two RBIs. Connor Teykl, Grayson Lewis, John Williamson and Kirby Taylor each had two hits for Rice, while Houston righthander Aaron Garza didn’t get out of the first inning and allowed four runs in 1/3 of an inning.

San Diego: The Toreros don’t have a great RPI and will need to accumulate some nice RPI wins down the stretch to notch an at-large bid (that’s under the assumption they don’t get the automatic bid). Well, the Toreros got a really nice win Tuesday night with a 6-1 home triumph over Long Beach State. USD starting pitcher Drew Jacobs struck out four, didn’t walk anyone and allowed a run on four hits in five innings, while Daniel Reitzler and Anthony McIver each were very good out of the pen, with Reitzler tossing three shutout frames. Leadoff hitter Bryson Brigman led the USD offense with two hits and three RBIs.

Vanderbilt might be going through a little funk right now. The Commodores made headlines last week by getting silenced by Lipscomb in midweek action. Then came a home series loss to Ole Miss. Now, the ‘Dores have to rebound from a tough midweek loss to Belmont, 3-2. Once again, the VU offense was stymied by Belmont pitching, with Bruins starting pitcher Patrick McGrath striking out six, walking just one and allowing two runs (one earned) in seven innings. Meanwhile, Matt Beaty led the Belmont offense with two hits — one a home run — and an RBI.

Missouri has played very well lately, but dropped a tough 4-3 home decision to Arkansas-Little Rock. Missouri starting pitcher John Miles had a quality performance in five innings of work, but UALR got a nice performance as well from starter Reed Willenborg, who struck out seven, walked two and allowed just three runs, all unearned, on five hits in eight innings.

You don’t see complete games often during the midweek, but how about 6-foot-1, 200-pound, Massachusetts righthander Tim Cassidy in a 6-0 win over Central Connecticut? He struck out three, walked one and allowed just four hits in a complete game shutout and victory over the Blue Devils.

Kent State, surprise, surprise, has yet another solid club this season, and the Flashes added yet another quality win to their resume with a 1-0 triumph over Pittsburgh on the road. Kent starting pitcher Jared Skolnicki set the tone in this one, striking out five, walking one and allowing six hits in 6.2 shutout frames.

When things go bad … they just, well, go bad. Tennessee desperately needed a series win over Missouri last weekend, and wasn’t able to get that despite winning the series opener. The Volunteers’ woes continued Tuesday night in a 7-5 loss to Middle Tennessee State, which is fighting for an at-large berth in the postseason. UT starting pitcher Zach Warren allowed three runs on four hits in three innings, while the rest of the UT pitching staff struggled immensely.

Speaking of struggling UT’s, how about Texas? After dropping a tough home series against Oklahoma last weekend, the Longhorns had a chance to turn the tide a bit in a midweek bout at home against Sam Houston State. Yeah, that didn’t happen, as the ‘Horns dropped a 5-0 decision to drop well into the 90s in the RPI, and to just 19-18 overall. SHSU starting pitcher Alex Bisacca struck out three and allowed just a hit in four innings, while Jordan Church struck out four in five shutout innings to end the contest.

It might not rank very high on the college baseball rivalry scale, but Michigan State captured a 4-2 decision over rival Michigan in midweek action at Comerica Park. Hard-hitting Ryan Krill had a double and two RBIs to lead the charge, while the bullpen was terrific with Joe Mockbee (2.2 IP, 0 R) and Jeff Kinley (1.1 IP, 0 R) leading the charge … The only negative? The two teams, both hugely popular in the State of Michigan, played in front of a whopping 1,935 fans. That’s pretty bad, folks.