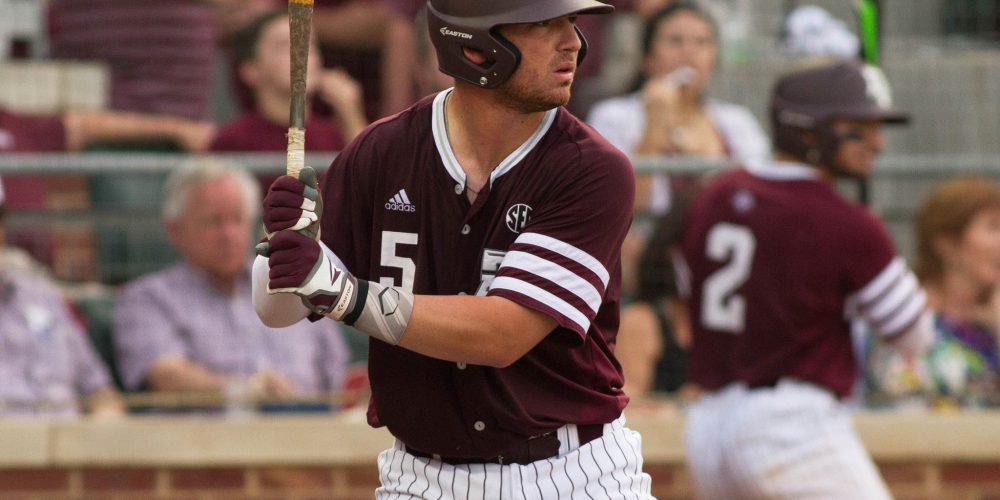 The sheer strength of the Gators’ pitching staff has been well documented over the past few weeks, and Kevin O’Sullivan’s club once again flexed their muscles Tuesday night in a dominant 6-0 home victory over Florida State.

Offensively, Peter Alonso and Nelson Maldonado each hit a home run in the contest, while J.J. Schwarz went 3-for-5 with an RBI.

The Aggies and Longhorns met in NCAA regional action a couple of years ago, but they rekindled their rivalry in regular season fashion for the first time since 2012 on Tuesday, and it was an absolute dandy, especially late, as A&M catcher Michael Barash hit a walk-off solo home run in the bottom of the ninth to propel the Aggies to a narrow 5-4 victory.

A&M’s bullpen made things interesting late in the game with some bullpen struggles, but controlled the contest much of the way with righthander Brigham Hill sitting low-to-mid 90s with his fastball, striking out five and allowing six hits in seven shutout innings, while things got interesting when elite closer Ryan Hendrix came in and had massive control issues in the eighth and ninth innings. UT actually tied the game at 4-4 in the ninth inning despite being down 4-0 entering the frame when shortstop Bret Boswell slapped a two-RBI single into left field.

The Aggies won the game in the bottom of the ninth when Barash sent a 3-2 offering from usual weekend starter Ty Culbreth well over the wall in left field, sparking pandemonium and inciting a near-brawl near home plate as the Aggies celebrated.

While the Aggies get a win over Texas and improve to 16-1 entering SEC play with much  momentum, the Longhorns showed some intestinal fortitude as well, and it will be interesting to see how they play this weekend with Tulane heading to Austin. It was good to see these two long-time foes on the diamond again.

Upset of the day: Eastern Kentucky over No. 15 Mississippi State

Mississippi State took a big step forward last weekend by doing a clean sweep of highly-ranked Oregon at home. However, it had an ugly midweek loss at home to Eastern Kentucky on Tuesday, dropping the contest 16-12.

The Bulldogs had a six-run lead going to the eighth inning, and blew that. Then, they allowed four EKU runs in the top of the 10th inning and were unable to bounce back in the bottom half of the frame. MSU starting pitcher Konnor Pilkington put together a serviceable performance, while Kale Breaux, Ethan Small, Vance Tatum and Blake Smith struggled out of the bullpen.

For the Colonels, hard-hitting outfielder Kyle Nowlin went 2-for-5 with a home run and three RBIs, while third baseman Mandy Alvarez hit a home run and knocked in a pair of runs. Meanwhile, outfielder Shea Sullivan also had a big night, going 2-for-4 with three RBIs. Nowlin hasn’t been ultra-consistent so far this season, but does lead the team with eight homers, while Alvarez is having a huge year thus far with a .395 average, five homers and 22 RBIs.

As important of a win it was for EKU (8-8), it was an equally ugly loss for a State club looking to carry some momentum into Southeastern Conference play this weekend.

• BYU has been one of the pleasant surprises of the season thus far, improving to 16-1 on Tuesday with a dominant 6-0 win over rival Utah in the Holy War. The Cougars used eight pitchers to get it done on the mound, while Colton Shaver led the offense with a home run, while Eric Urry, Bronson Larsen and Tanner Chauncey each finished the game with a pair of hits.

• Oklahoma State has had its fair share of disappointments early this season, but rose to the occasion and snagged an impressive 7-6 road win over Dallas Baptist. OSU starting pitcher Tyler Buffet got the night started on the right foot with seven strikeouts and just one run allowed in six innings, while the offense scored four runs the first two innings and leadoff hitter J.R. Davis led the charge with three hits and two runs scored. 3B Garrett Benge also had a productive night with two hits and two RBIs.

• Southeast Missouri is a quality mid-major and hit the road and took an impressive contest from Missouri, 7-2. SEMO starting pitcher Jacob Lawrence set the tone in this one with 11 strikeouts and just a run on six hits allowed in eight innings, while 3B Hunter Leeper led the offense with three hits (one a double) and three RBIs.

• TCU has been dealing with some injuries over the past week with Nolan Brown and now Connor Wanhanen on the shelf because of injuries. However, despite being down 4-1 to Rice on the road Tuesday night, the Frogs still stormed back to win 6-4 by scoring three runs in the eighth inning and two more in the ninth. Brian Trieglaff was terrific out of the TCU bullpen to give his team a chance late in the game, while offensively, third baseman Elliott Barzilli had a nice night with a double and two RBIs.

• Nicholls State hasn’t had quite the season it had hoped for thus far, but put together an impressive 2-1 home win over Tulane with starting pitcher Daniel Goff having an impressive night on the mound, striking out three and allowing just three hits in five innings. Meanwhile, the Green Wave wasted a quality performance from starting pitcher J.P. France, who struck out seven and allowed a run on four hits in 6.1 innings.

• Western Kentucky is off to a very solid start in the John Pawlowski era, and added another feather to its cap Tuesday night with a dominant 14-6 road win over Kentucky. WKU outhit the Wildcats 15-9 and were led at the plate by 3B Danny Hudzina and C Ty Downing, who totaled five hits and five RBIs, while Zach Janes also had a big day at the plate, going 2-for-3 with two RBIs. WKU is now 11-5 overall, a clear improvement from last season.

• Liberty hit the road on Tuesday and garnered a big-time 22-7 win over Virginia Tech, outhitting the Hokies 24-8 in the process. Liberty’s Dalton Britt and Andrew Yacyk each hit a home run and knocked in four runs, while OF Will Shepherd went 4-for-7 with five RBIs.

• North Carolina has had a terrific season thus far and caught East Carolina still reeling from that road series loss to Rice in a 17-4 win over the Pirates. UNC’s Tyler Ramirez had a big day at the plate with a home run and three RBIs, while Brian Miller and Adam Pate combined for five hits and six RBIs, and Tyler Lynn added a home run with Brandon Riley also recording two hits.  North Carolina’s sheer dominance so far this spring continues to be a surprising story line.

• Auburn dropped a midweek bout to Georgia Tech at home last week, but bounced back in impressive fashion with a 14-3 road win over the Jackets. The top four hitters in Auburn’s lineup combined for 10 hits, with Josh Palacios having a big day with a home run and two RBIs. Niko Buentello had three hits and two RBIs and leadoff hitter Anfernee Grier had another good day with two hits and two RBIs.

• Southern Miss has been waiting for yet another statement victory, and it got just that in impressive fashion with a 9-2 home win over Alabama. USM starting pitcher Nick Johnson struck out five and allowed just two runs in 6.2 innings, while C Chuckie Robinson led the charge at the plate with two hits and four RBIs, with leadoff hitter Dylan Burdeaux hitting his third homer.

• Connecticut is one of those teams that we expect to be in the mix for an NCAA postseason berth at the end of the regular season, and it added a quality midweek victory to its schedule with a narrow 5-4 win over USC, which dropped to 7-8 overall. UConn leadoff hitter Jack Sundberg had a double, three hits and an RBI, while Troy Sefanski knocked in three runs to help lead the cause.