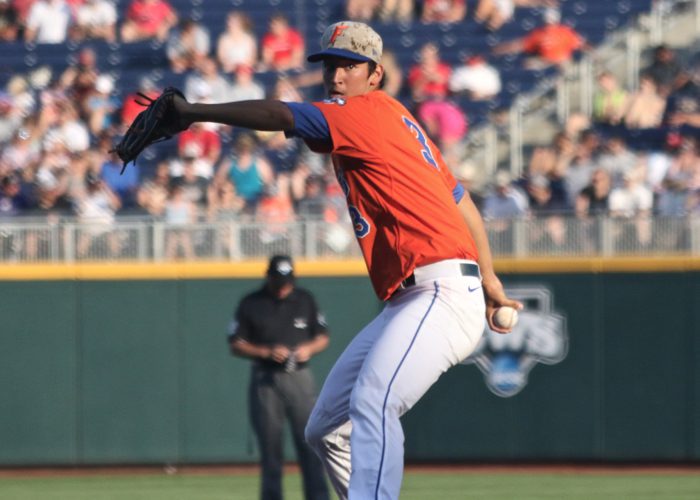 Team of the day: Tulane

David Pierce’s Green Wave had that little hiccup out on the West Coast a couple of weeks ago, but they’ve played well lately, bombarding Pepperdine at home this past weekend, while also putting together an impressive performance in a 5-3 home win over No. 24 Louisiana-Lafayette on Tuesday, and scoring all five of their runs in their final three at bats.

Tulane freshman lefthander Ross Massey was terrific against the Ragin’ Cajuns, striking out two and allowing just two runs, one earned, on eight hits in six innings, while Trevor Simms threw well out of the bullpen in three innings of relief work. Jeremy Montalbano, Lex Kaplan and Grant Brown led the offense with homers.

Tulane is now 8-4 overall and winners of four-straight contests. In a bit of bad news, though, shortstop Stephen Alemais is out at least the rest of the week with an injured shoulder and his return next week is still in question.

Upset of the day: CS Northridge over No. 20 UCLA

UCLA was very impressive over the weekend with a 3-0 record at the annual Dodgertown tournament, but its luck ran out Tuesday in an ugly 20-12 setback to Cal State Northridge.

Bruins lefthander Hunter Virant had an afternoon to forget, allowing nine runs (six earned) on five hits in just 3.2 innings, while Northridge first baseman Branden Berry had a day to remember, going 3-for-5 with a home run, four runs scored and six RBIs. Albee Weiss had three hits, two of them homers, and three RBIs, while Fred Smith and Elias Orona each knocked in three runs.

As with several Big West teams right now, Northridge is a rather interesting team to watch. The Matadors are 10-3 overall and have been terrific since dropping a series to Cal State Bakersfield to begin the season.

As our Aaron Fitt noted in his takeaways piece from Los Angeles, the Bulldogs have plenty of potential from an offensive standpoint. But, that potential hinges on guys like Gavin Collins to rise to the occasion.

Well, Collins might be ready to do just that. He hit a home run against Oklahoma on Sunday, and was back at it yet again on Tuesday in a 7-3 victory over South Alabama.

For the season, Collins is now hitting .286 with a trio of homers and 10 RBIs.

• Florida just has a ridiculous pitching staff. The Gators hit the road to face North Florida on Tuesday, and junior righthander Dane Dunning set the tone for a 6-2 victory.  Dunning struck out 10, walked two and allowed just two runs on four hits in six innings. Oh yeah, reliever Kirby Snead tossed three hitless innings out of the bullpen to close it out.

• Oklahoma State needs all the quality wins it can get right now after a slow start to the season. The Cowboys (7-6) beat Missouri State 6-5, taking the lead in the eighth inning on a two-RBI single from Garrett Benge. MSU, though, would tie things up before going to extra innings. There, Benge, again, struck with a sacrifice fly to score the go-ahead run. Benge finished the night with three RBIs, while Dustin Williams had a home run and two RBIs, and shortstop Donnie Walton finished the day with a pair of hits.

• Georgia Tech has such the luxury of having a senior in the midweek in righthander Cole Pitts. Pitts was terrific against Auburn in a 4-1 victory, striking out four and allowing just a run on three hits in five innings, while the Jackets outhit the Tigers 10-4 with catcher Joey Bart leading the way with two hits, one a double, and three RBIs. Danny Hall and his staff are doing a terrific coaching job with this club thus far.

• South Carolina got back to business on Tuesday with a 7-1 home win over a quality Wofford club. Outfielder Dom Thompson-Williams, who struggled against Clemson last weekend, rose to the occasion, as we kind of predicted in our South Carolina takeaways from last weekend. Thompson-Williams went 3-for-3 with a home run to lead the offensive charge. Meanwhile, Adam Hill struck out five and allowed a run on six hits in three innings.

• How about this statistic? Florida State defeated South Florida 12-4 on the road Tuesday … The Seminoles left a whopping 16 runners on base, too, meaning the game could’ve been a lot worse. Hank Truluck had a big day with a home run and three RBIs, while Quincy Nieporte had a double and three RBIs.

•  Louisiana Tech, as expected, started ace pitcher and lefthander Tyler Clancy against the Tigers on Tuesday, and he scuffled, striking out just two and allowing five runs (all earned) on six hits in just three innings of work. Meanwhile. Greg Deichmann and Jake Fraley each recorded a pair of hits in the victory, while Beau Jordan knocked in two runs. The Tigers seem to be finding their stride a little bit right now.

• Boston College is one of the great early season stories. The Eagles played host to Central Michigan on Tuesday, and once again looked great a dominant 9-3 triumph over the Chippewas. BC third baseman Joe Cronin had a massive game, hitting a double, home run, scoring two runs and knocked in four more. Meanwhile, Gian Martellini went a perfect 2-for-2 to help lead the offensive cause.

• Maryland was on the cusp of our top-25 rankings coming into the season, but we’re glad we didn’t rank the Terrapins here early. The Terps have been scuffling since the season started, dropping a 10-8 contest to Maryland. Terps starting pitcher Cameron Enck had a bad night on the mound, allowing five runs (four earned) on three hits in 2.2 innings, while others also struggled. Surprisingly, Maryland is now 5-6 overall.

How about what the Spartans did offensively on Tuesday, beating Illinois State 15-0 and outhitting them 19-1 in the process. Michigan State second baseman Jordan Zimmerman went a perfect 4-for-4 with two RBIs, while Brandon Hughes had four hits and first baseman Alex Troop had three hits, including four RBIs. Jake Boss’ club looks very solid in the early going.

• Wake Forest hopes to shock some people this weekend when Clemson trots to town, but it’s first things first for Coach Walter’s club, as they throttled Coastal Carolina 11-0 on the road. Stuart Fairchild, Gavin Sheets and Keegan Maronpot combined to knock in seven runs, while Christian Bartholomew also set the tone on the mound with four shutout frames to begin the game.