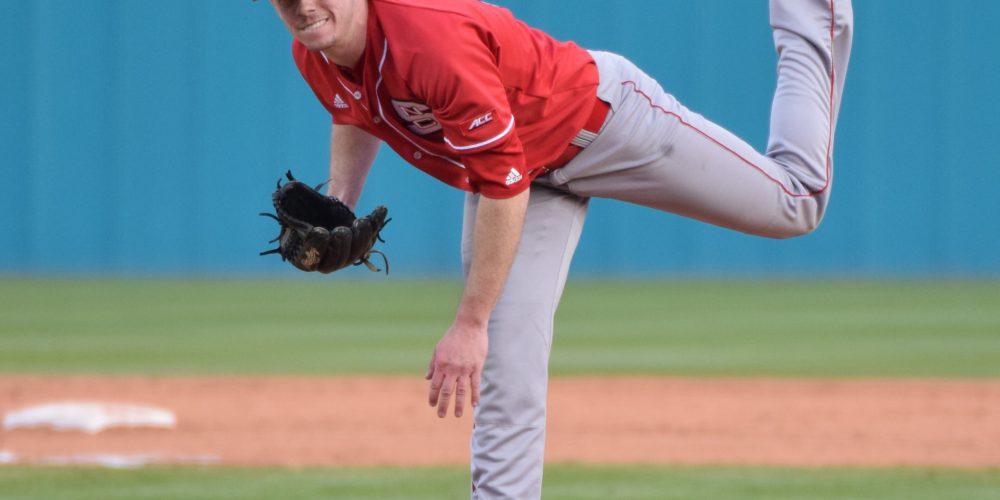 No. 8 NC State improved to 7-2 with a quality win against CAA favorite UNC Wilmington, 5-2. Infielder Evan Mendoza had a big day for the Wolfpack, going 4-for-4 with a homer, a double and two RBIs. NC State also continued to get strong work in the bullpen from sidewinder Chris Williams (2.1 IP, 2 H, 0 R) and lefthander Will Gilbert (2 IP, 0 H, 0 R, 0 BB, 3 K). Holding UNCW to two runs is nothing to sneeze at; heading into the game, the undefeated Seahawks had scored in double digits every game, scoring 76 runs in those games. So this was a very good test for NC State’s pitching depth after the Wolfpack also played Tuesday (and beat UNC Greensboro).

Louisiana Tech handed Arkansas its first loss of the season, 3-2 in Fayetteville. Third baseman Raphael Gladu drove in all three La Tech runs with a two-run double in the third and a sacrifice fly in the sixth. Arkansas, which scored 22 combined runs in its last two games against Houston and Texas Tech, was limited to just a pair of runs on six hits by lefty Tyler Clancy (6.1 IP, 2 ER), Phillip Diehl (0.2 IP, 0 R) and Adam Atkins (2 IP, 1 H, 0 R). Clancy improved to 3-0, and he also has a very impressive win against Louisiana-Lafayette on his resume in a midweek game last week. Louisiana Tech is now 6-2 overall, and those two midweek wins against ranked opponents are certainly eye-opening. We figured it was only a matter of time before Greg Goff turned the Bulldogs into contenders — he did it at Campbell, and he can do it in Ruston. But it might be happening sooner than we expected.

• Arkansas wasn’t the only Top 25 team to lose Wednesday. No. 16 East Carolina, No. 18 Coastal Carolina, No. 23 Cal State Fullerton and No. 24 Louisiana-Lafayette also lost. The Pirates dropped a back-and-forth 8-7 affair at home against Elon in 10 innings, as Kyle Jackson’s RBI single in the 10th lifted the Phoenix to the victory. It wasn’t a pretty game, as the two teams combined for five errors, 13 walks and 23 hits — afterward, ECU coach Cliff Godwin lamented his team’s lack of preparedness and focus. Elon (4-5) got a combined five hits and six RBIs from cleanup man Tyler McVicar and 5-hole hitter Danny Lynch.

• Coastal Carolina, meanwhile, went down the coast and was knocked around by College of Charleston, 9-4. Talented freshman Dupree Hart led a balanced CofC attack with two hits (including a triple) and four RBIs, and Michael Carpin (5 IP, 5 H, 2 ER, 1 BB, 5 K) improved to 2-0. The Cougars, coming off a series loss at Florida State, leveled their record at 4-4.

• Fullerton was blanked in a road game at Arizona, 2-0. Nathan Bannister (6.2 IP, 2 H, 0 R, 0 BB, 4 K) and Bobby Dalbec (2.1 IP, 2 H, 0 R, 0 BB, 2 K) combined on a four-hit shutout for the frisky Wildcats. Dalbec also led the offense with an RBI single and a run scored in Arizona’s two-run second. The Titans have scored three or fewer runs in four of their first seven games — but they’ve also yet to allow more than three runs in a game.

• Louisiana-Lafayette barely hung onto a Top 25 spot after a 1-3 showing last week, and the Cajuns fell in a road game at McNeese State on Wednesday, 7-2. The Cowboys got a balanced offensive attack, as all seven of their hits were recorded by different players, and they also benefitted from four Cajun errors. Austin Sanders (5.1 IP, 5 H, 1 ER) and Trent Fontenot (2.2 IP, 0 H, 0 R) turned in strong work on the mound for McNeese.

• No. 1 Florida completed a two-game midweek sweep against UCF with a 4-0 win behind freshmen dynamos Jackson Kowar (5 IP, 3 H, 0 R, 0 BB, 8 K) and Brady Singer (2 IP, 1 H, 0 R, 0 BB, 3 K). A third hard-throwing righty, Shaun Anderson, worked the final two innings, allowing just a hit and no walks while striking out two. Florida coach Kevin O’Sullivan said Kowar and Singer both worked at 93-96 Wednesday night and pumped strikes with three pitches, while Anderson was 91-93 with a swing-and-miss slider and curveball. That’s not what midweek pitching is supposed to look like. Through 10 games, Florida (9-1) is living up to every bit of its billing as the nation’s premier pitching staff. In 89 innings, Florida’s staff has a 111-23 strikeout-walk mark and has held hitters to a .196 batting average and no homers.

It’s worth noting that four UCF pitchers held the Gators to just three hits, but two of them were homers by Dalton Guthrie and Mike Rivera — and a pair of UCF errors opened the door to Florida’s three-run fourth. 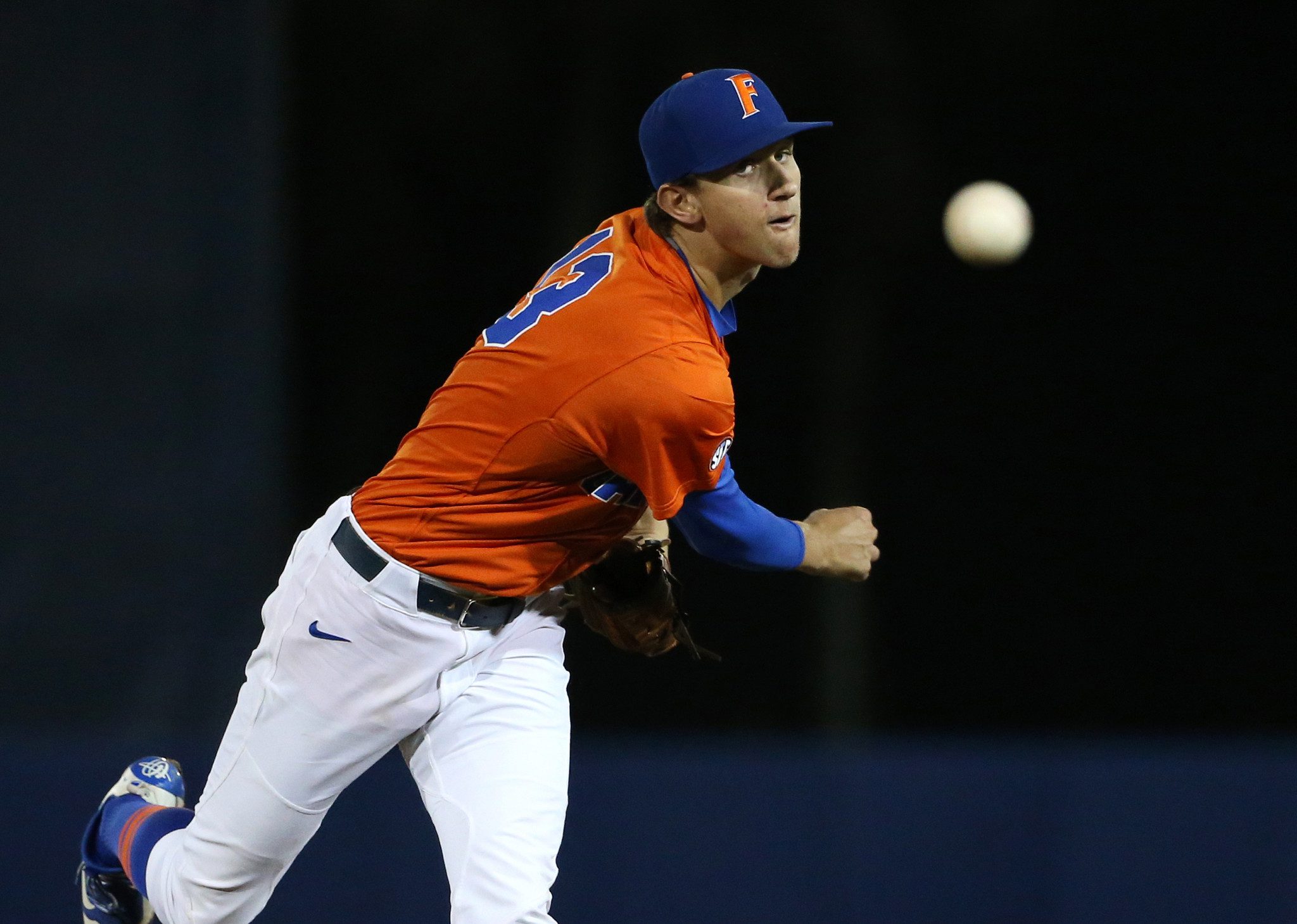 • No. 6 North Carolina erased a 5-3 deficit with an eight-run outburst in the seventh inning to beat Winthrop 11-6. Sophomore third baseman Zack Gahagan had two hits in that inning — a single and an RBI double — and finished 4-for-4 in the game. The Tar Heels are 6-1.

• Miami sophomore righty Jesse Lepore, who was the team’s best pitcher in the fall, picked up his first collegiate victory in the Hurricanes’ 5-2 win against Florida Gulf Coast. Lepore worked 5 2/3 strong innings, allowing two runs on six hits and no walks while striking out seven. Leadoff man Carl Chester had three hits, and preseason All-American Zack Collins added three RBIs and his second homer of the season.

• Maybe the most surprising game of the day took place in Tallahassee, where Villanova (2-6) gave Florida State all it could handle. The Seminoles eventually escaped with an 11-10 win in 14 innings, but they had to work hard for it. Most of the scoring happened in the first six innings — FSU sophomore Cobi Johnson (3 IP, 4 H, 5 ER, 3 BB) struggled — and the bullpens traded five straight zeroes from the eighth through the 12th. Villanova scored twice in the top of the 13th, only to see the Seminoles answer with two in the bottom of the frame on John Sansone’s two-run single. Finally, FSU pushed across the winning run on Cal Raleigh’s sacrifice fly in the 14th.

• No. 17 Ole Miss stormed back from an early 6-0 deficit to beat Memphis 9-7. J.B. Woodman (2-for-4, 3 RBI, 2B) stayed hot for the Rebels, who managed to score nine runs on just five hits, thanks largely to eight walks and two errors (which led to five unearned runs). Ole Miss improved to 7-1.

• South Alabama improved to 8-1 on the season by completing a two-game midweek sweep of Conference USA contender Southern Miss. The Jaguars held a physical, dangerous Southern Miss lineup to five runs in the two games, winning Wednesday 4-2 behind Harrison Spruiell (6.2 IP, 4 H, 1 ER, 1 BB, 5 K). The Jaguars took control by manufacturing three runs in the third inning, and their pitching took it from there.

• Southeastern Louisiana thumped Tulane 13-4. Carson Crites, Ryan Byers and Webb Bobo led Southeastern’s 12-hit attack, combining for seven hits, six runs and five RBIs in support of Pat Cashman (6.2 IP, 5 H, 3 ER, 1 BB, 8 K). After losing the first two games of their series against Troy this past weekend, The Lions have rebounded by handing Troy its first loss in the Sunday finale and then beating up on a good Tulane club. They’ll get another big test this weekend at the Keith LeClair Classic against East Carolina, Maryland and Tennessee.