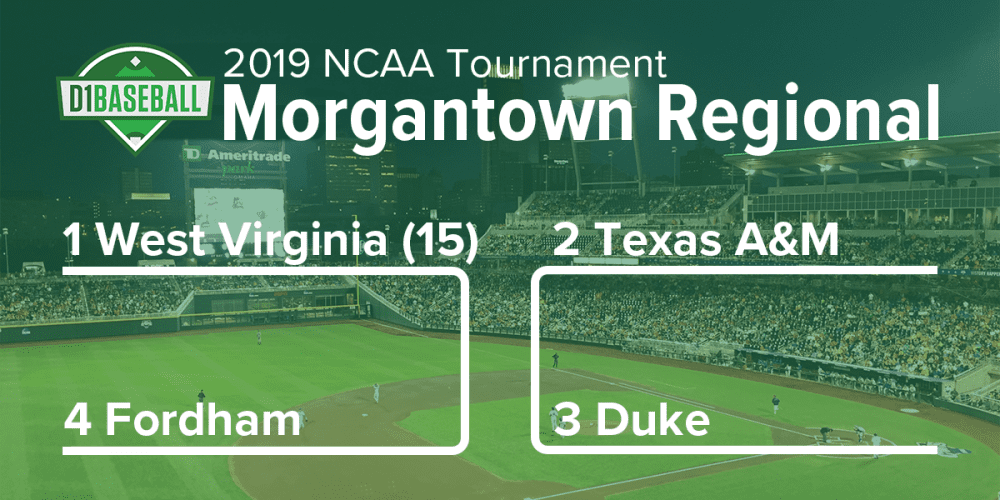 The Morgantown Regional is West Virginia's first since 1955, and just the second ever

West Virginia gets to be a regional host for just the second time ever, and the first time since 1955. The Morgantown Regional has one of the strongest No. 2 seeds, so the Mountaineers will count on the home crowd to give them a boost.

Most Exciting Player: Alek Manoah, West Virginia
The most exciting player in this regional is not a position player, but none other than Manoah. In addition to his prowess on the mound, Manoah exudes confidence and is a vocal leader for this team. Even when he’s not pitching, he’s an incredibly important part of this team. He sets the tone for the Mountaineers.

Best Hitter: Braden Shewmake, Texas A&M
Shewmake got off to a horrible start this season, so his numbers aren’t overwhelming. But he’s been very good the past couple of months and everything A&M does offensively revolves around him. Shewmake is hitting .315 with 14 doubles, four triples, six home runs and 46 RBIs, along with an .863 OPS. In essence, this is far from an offensive regional, but Shewmake leads the charge.

Best Defensive Player: Brandon White, West Virginia
Shewmake has done a strong job up the middle this spring, but I love the way White plays the game. He has confidence out in center field, he covers a lot of ground and has good instincts. He does a terrific job of tracking down balls that seems otherwise uncatchable, and that’s game-changing.

Best Pitcher: Alek Manoah, West Virginia
While Texas A&M has the best rotation, the Mountaineers have the premier arm in this tournament in the imposing and hard-nosed righthander. Manoah has tallied a 1.85 ERA in 102.1 innings this season, along with 135 strikeouts and 23 walks. He has the swagger to go with the numbers, too.

X-Factor: Joey Loperfido, Duke
The Blue Devils were trying to find their way earlier this season when Loperfido went down with an injury. But they’ve won a lot more than they’ve lost since his return to the lineup. Loperfido doesn’t have overwhelming numbers with a .280 average, four home runs and 16 RBIs, but that’s in limited action. Loperfido is a premium talent and is capable of going off this weekend.

Best Starting Rotation: Texas A&M
The Aggies might have the best one-two punch in college baseball with John Doxakis and Asa Lacy leading the way. Doxakis has a mean streak and threw eight innings of no-hit baseball last week, while Lacy is one of the best in the business. The Aggies have two more high-quality starting options as well in Christian Roa and Chris Weber.

Best Bullpen: Texas A&M
Once again, the Aggies get the edge here. A&M has plenty of weapons down in the bullpen. Freshman lefthander Joseph Menefee has put together a strong first season, while JC transfers Bryce Miller and Kasey Kalich have provided big innings and stability to that unit. Though he has struggled as of late, crafty lefty Chandler Jozwiak is another solid arm to watch in Morgantown this weekend.

Best Offensive Team: Duke
Once again, if you’re a fan of high-octane offenses, this regional likely won’t be for you. The four teams in this regional each have national offensive ranks well into the 100s with Duke leading the way at 128 in terms of batting average. And how about this? A&M is ranked 240th nationally in batting average. Pretty astonishing.

Best Defensive Team: Texas A&M
If you are a fan of defense, you might want to hide your eyes during this regional. None of the four teams here this weekend have a team fielding percentage ranked in the Top 100 nationally. The Aggies do have a solid backstop in Mikey Hoehner, while the middle infield is strong with Braden Shewmake and Bryce Blaum leading the charge. Blaum typically is consistent, but does have a tendency to make some random mistakes.

No. 1 Seed Win Probability (1-10): 5. West Virginia might be hosting at home, but the Aggies, with their strong pitching, could provide a stiff test for the home team.