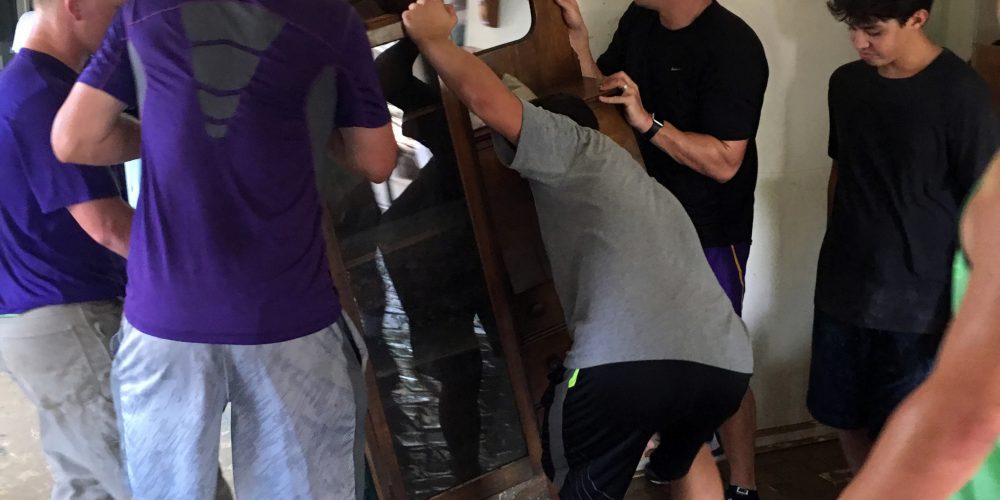 It doesn’t seem like the State of Louisiana ever catches a break from a weather standpoint.

While many across the country have all their attention on the Rio Olympics, the Pelican State has endured yet another natural disaster. Thanks to several days of torrential downpours, areas in the Southeastern part of the state around Baton Rouge took on significant rainfall, which led to widespread flooding. The result? These are far from the final tallies, but so far, over 40,000 homes have been either damaged or destroyed by flooding, 13 people have died as a result of the flooding and another 30,000 people had to be rescued because of rising water. The inclement weather even hit the college baseball community as Louisiana-Lafayette assistant Anthony Babineaux’s house suffered significant water damage. (Babineaux has a Go Fund Me page, here.) 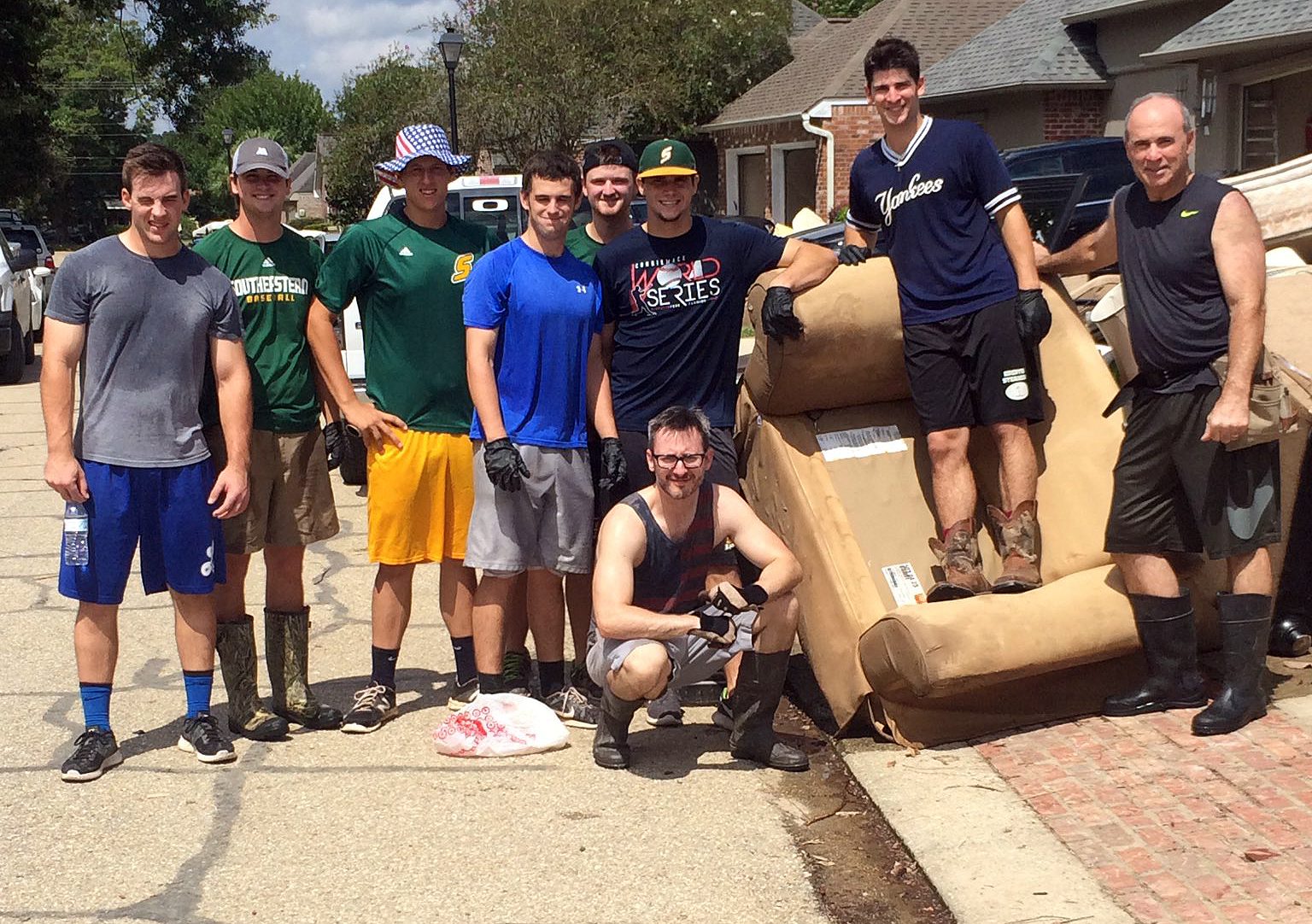 As you might imagine, the cleanup process for folks in Louisiana will be lengthy. However, at least a couple of baseball teams in the region – LSU and Southeastern Louisiana – have extended a helping hand. The Lions trekked to hard-hit Central, La., just east of Baton Rouge, to help clean out houses and whatever else they could do to help the community, while LSU coach Paul Mainieri heeded a call from former LSU All-American Ben McDonald’s family, who needed immediate helping clearing out a flooded house for an elderly family member.

Mainieri and the Tigers didn’t think twice, and several players trekked to Denham Springs, La., to not only clean up one house, but to also offer their services to the rest of the neighborhood. 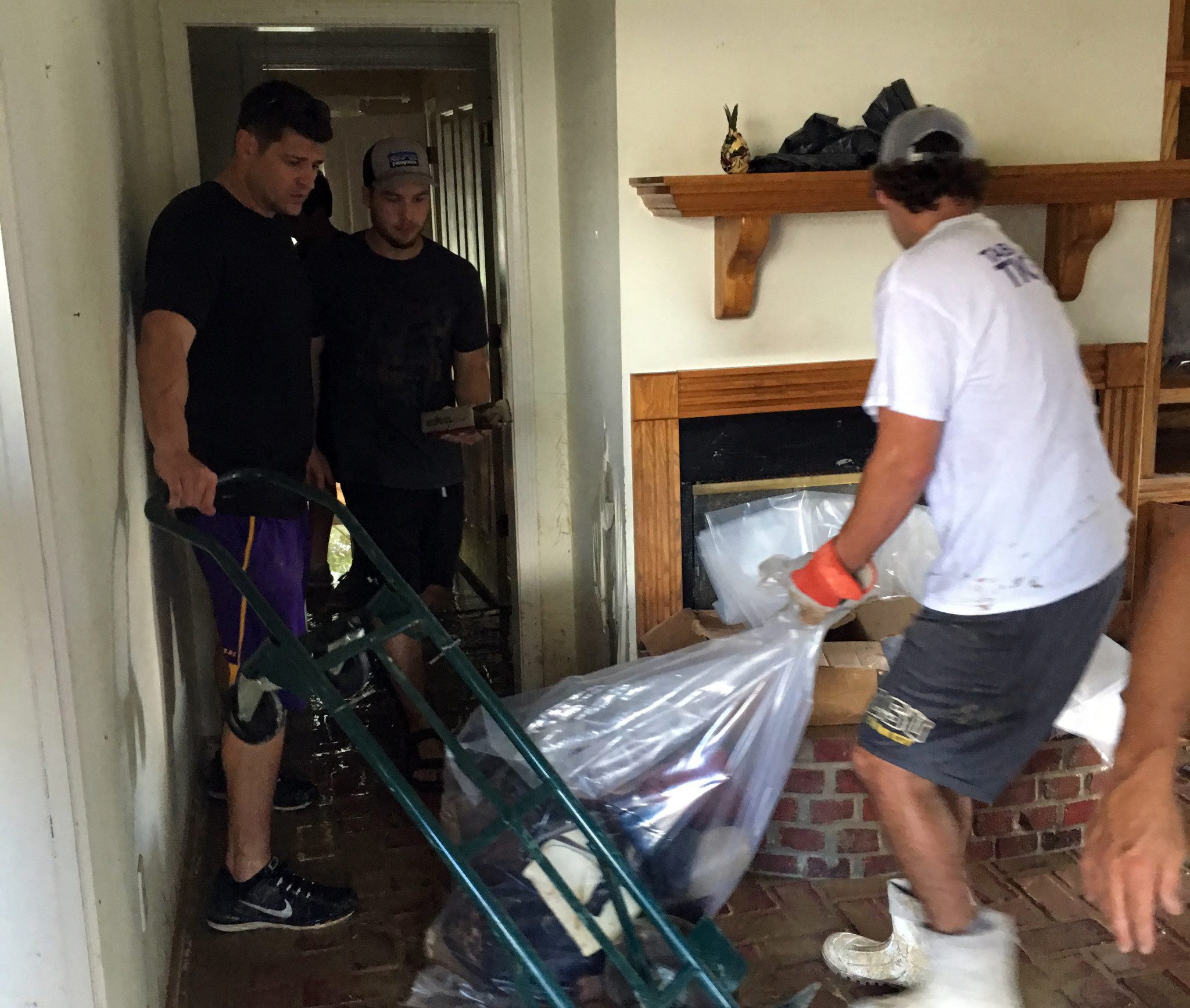 “They were animals in there,” Mainieri told Louisiana scribe Glenn Guilbeau. “Before you knew it, they were finished. But then they just started walking down the street and knocking on doors and asked if they could help. The people who opened their doors to these perfect strangers had eyes as big as grapefruits. I’ve been coaching for 34 years and had a lot of great things happen (including the 2009 national championship), and I’ve never been prouder of a group of guys. They must have done another eight or 10 houses.”

Louisiana has a long road ahead and you can donate in many ways, including specifically for victims of the flooding via the American Red Cross.

For the past couple of seasons, more and more fans of college baseball have called for video replay to have a greater presence in our sport. Well, the NCAA Playing Rules Oversight Panel approved a proposal earlier this week that will allow teams and conferences nationwide to implement the video replay rule, effective next season.

Replays are about to become more common in college baseball. (Mandy Sorenson)

Just as a reminder, here are reviewable plays:

• Deciding if an apparent home run is fair or foul.

• Deciding whether a batted ball left the playing field for a home run or a ground-rule double.

• Deciding if a batted ball is fair or foul.

• Deciding whether a fielder did or did not make a catch on a fair batted ball hit into the outfield or on any foul ball.

• Deciding scoring plays at the plate.

• Determining if a player should be ejected for a collision (illegal or malicious slides).

• Determining if a run scored on timing plays. (An example would be to determine if a base runner scored before the last out of an inning was recorded at another base.)

• The rules committee also passed stricter rules on illegal bat use, while also clarifying the windup position as: “A pitcher is considered to be in a windup position when the pitcher’s shoulders and chest are generally facing home plate.”

• You can see a full chart of the offseason head coaching changes, here.

• Kansas State has made quite the impressive assistant coaching hire this week with the addition of long-time and former Alabama head coach Mitch Gaspard. Gaspard resigned this past summer after the Tide failed to reach the NCAA postseason. However, he’s a solid coach with a strong reputation in the coaching industry. Gaspard will start recruiting an area that’s rather new to him given his ties to the Texas and Louisiana region. Still, what a terrific hire after Andy Sawyers headed to Southeast Missouri State to be the head coach there, replacing Steve Bieser, who went to Missouri this summer.

• LIU-Brooklyn was one of just two head coaching vacancies over the past few weeks, but that search finally came to a close as sources informed D1Baseball.com that Chicago State associate head coach Dan Pirillo is the new head man for the Blackbirds. Pirillo has spent the past three seasons as an assistant at Chicago State, but has experience at LIU-B, spending two seasons with the program before heading to Georgia College.

• In case you were wondering, the only known head coaching vacancy right now is at St. Peter’s, where apparently second-year head coach T.J. Baxter resigned at some point after the 2016 campaign. The Peacocks finished the spring with a 10-42 overall record, while also finishing with an ugly 5-19 record in the Metro Atlantic standings. From talking to sources close to the situation, it doesn’t appear St. Peter’s has had much transparency throughout the process.

• Vanderbilt has yet to officially announce his addition, but if you were on Twitter a few nights ago, you saw our report on Yankees national cross checker D.J. Svihlik accepting the Vandy vacancy left by Travis Jewett, who’s now the head coach at Tulane. Svihlik is a rather interesting hire. He’s had lengthy success as a scout and has a stellar reputation amongst his peers. Furthermore, he becomes the second Yankees scout over the past few years to accept a Division I assistant position. The last? Andy Cannizaro, who has had a wealth of success as LSU’s hitting coach and recruiting coordinator. Vandy hopes Svihlik has the same type of impact and success. As for Svihlik’s college background as a player, he earned Big Ten Player of the Year honors back in 1998 while playing for Illinois.

• Texas sophomore infielder Kody Clemens announced on Instagram earlier this week he was having Tommy John surgery. Clearly, Clemens will miss fall workouts with the Longhorns. However, he could make a return to the lineup at some point next spring. Clemens was a spark plug type of player for UT at times last season, despite hitting .242 with just five homers and 28 RBIs.

• Mississippi State is the latest program to announce additional facilities renovations. The Bulldogs are nearing the start of a massive renovation project at Dudy Noble Field. However, they are getting ahead of the game in other ways as we speak, announcing Thursday the construction of the largest video board in college baseball. The video announcement suggested the board will be an impressive 45-percent larger than Arkansas’ video board, which was installed before last season. The Bulldogs’ board, measuring 60 by 43 feet, also will be larger than video boards at three Major League Baseball ballparks.

• Rice will become the latest college baseball program to trip to Cuba during the fall semester. The Owls will head to Cuba November 23rd and stay there through December 4. The goal? The Owls will play exhibition games against teams from the Cuban Baseball Federation, while also completing a fall semester credit-bearing course on trends in contemporary Cuba, while of course, also getting the unique experience of taking in the sights and sounds of Cuba.

“This will be quite an experience for our players and coaches, because baseball is Cuba’s national sport,” said Wayne Graham, Rice head baseball coach. “Cubans are some of the most knowledgeable and appreciative baseball fans in the world. I know this because my very first game at the AAA level was in Havana when I played for Buffalo in the International League. I am looking forward to going back, but I am even more excited about the entire cultural experience our players will have. They are student-athletes, and this is a one-of-a-kind trip for them to take in their young lives. It’s a wonderful opportunity for everyone.”

• TCU has had an incredibly difficult time since returning to Fort Worth from the College World Series. The Horned Frogs lost super fan Micah Ahern a few weeks ago after a lengthy and courageous battle with Neuroblastoma, while earlier this week, the Frogs received more soul-crushing news after incoming freshman righthander Drew Medford passed away in a one-vehicle car crash in Fort Worth. Medford, 18, had a potentially promising career ahead of him. In addition to his role as a pitcher, Medford would’ve had a chance to catch as well. Medford, ranked as one of the nation’s top 500 players by Perfect Game, graduated from Fort Worth, Texas (Paschal).

We lost another @TCU_Baseball teammate this morning. Please keep the Medford family in your prayers. pic.twitter.com/xBaM4BrLoQ

• It’s not everyday you get to see some of the premier high school prospects in the country go head-to-head against Division I Baseball teams, but that’s happening in a few weeks in Houston. USA Baseball’s 18U club will take part in team trials September 17-22, but things get interesting on the 24, 25 and 26, as they will face Texas, junior-college power San Jacinto and the University of Houston in order, to wrap up the trials.

• And lastly, yours truly is a total sucker for uniform buzz, and Miami is the latest school to do something hip with its product. The Hurricanes have had some impressive apparel changes since joining ranks with Adidas. And the latest addition to their repertoire is pretty cool, as the Hurricanes give ode to the Miami Maniac mascot. Check out the terrific hat below: