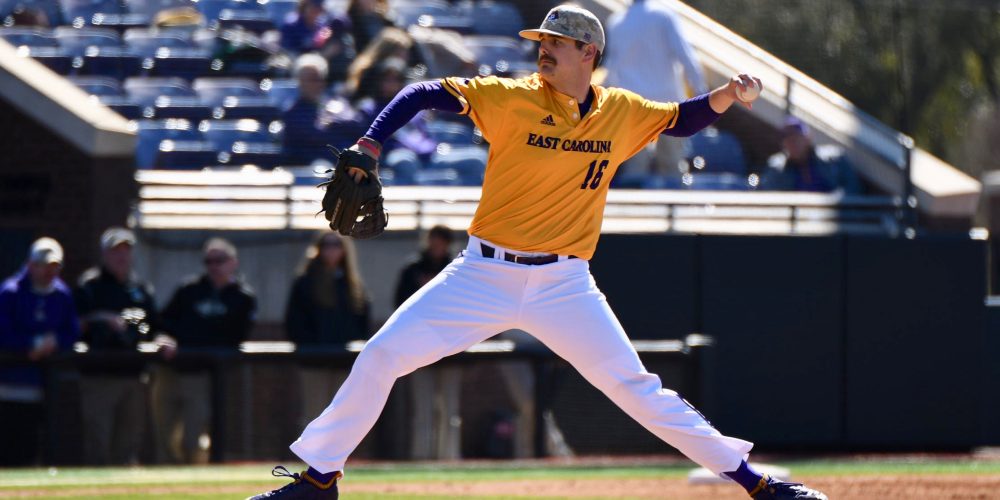 GREENVILLE, N.C. — After his team was outscored 26-4 in a three-game sweep at the hands of East Carolina, first-year Maryland head coach Rob Vaughn gathered his team around him and tried to pointed to the opposite dugout for inspiration.

Maryland has a mature, veteran team, but a number of its established older players have gotten off to rough first halves, as the Terps have scuffled to a 9-10 start. A year ago, East Carolina was a mature, veteran club with even higher expectations (and a top-10 preseason ranking), but injuries and underperformance caused ECU to finish 7-17 in the American Athletic Conference, good enough for last place.

“What we talked to the team about out there was like, look what (ECU) learned from it,” Vaughn said. “Because you’re watching that team now, who scuffled last year with some older guys, and they’re tough as nails, they’ve really learned from what they’ve done and responded in a way where, boy, that team’s tough, man. They do the little things right.

“The thing that’s impressive is the way they play defense and the way they don’t walk guys. It’s amazing when teams give you nothing, it’s hard. That’s what you kind of saw. They pound the strike zone, they play really good defense. In a weekend where we’re kind of needing something to fall, they kind of stuffed us there, and we weren’t able to string anything together.”

And that’s what jumps out about the Pirates right now: they play with focus, energy and confidence. They are as stingy with “the free 90” as any team in the country — they rank fourth nationally in both fielding percentage (.985) and fewest walks allowed per nine innings (2.5). Not coincidnentally, they also rank fourth in ERA (2.15).