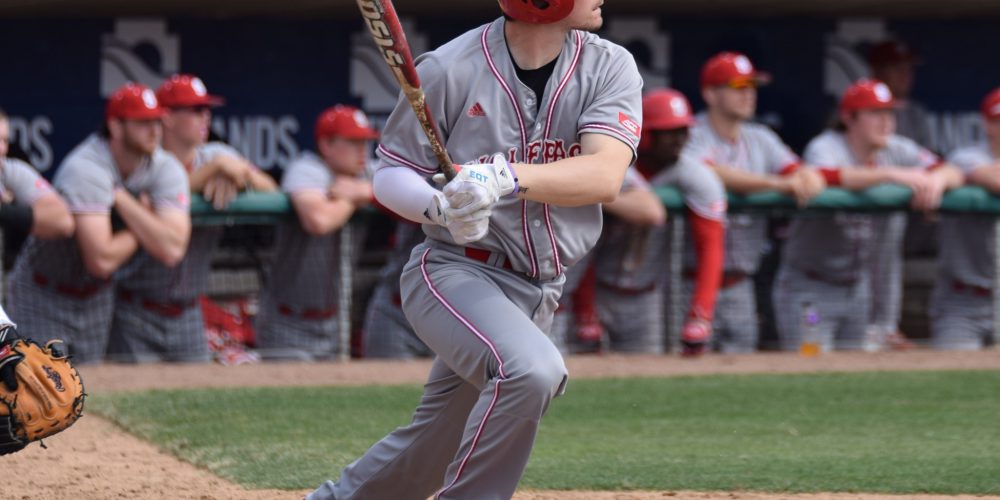 “It wasn’t the team I practiced with. That was not the team we practiced with,” Avent said Saturday. “I don’t know what they were, but it wasn’t them. And I’m not taking anything away from Old Dominion, they’re a good baseball team, but we just did not play well in any facet of the game. We pitched seven guys and played nine guys, and I can tell you two names that I thought played well.

“I went to bed about 3:30 this morning. I watched some of the worst TV you’ve ever seen in your life. I couldn’t have watched worse TV programs, because I couldn’t sleep, thinking about, ‘Are we going to be this bad all year?’ Holy cow.”

But NC State’s players reassured their coach with a much livelier performance Saturday at No. 24 Coastal Carolina. The Wolfpack showed resilience by repeatedly coming from behind during a wild back-and-forth slugfest that featured nine combined home runs, eventually resulting in a 13-10 win. It wasn’t a masterpiece — both teams employed numerous quality arms, and almost all of them struggled on a day when the hitting conditions were perfect, with a stiff wind gusting out to left field. But NC State needed to show its true character after Friday’s ugly start — this felt like a much bigger game than the second game of the season ought to be.

“You play for these stressful games,” said NC State junior first baseman Preston Palmeiro, who led the NC State offense. “Especially early in the year, we had a big game right there. Usually you play early and it’s not like that. Right there, the seventh, eighth, ninth inning, I was just walking back and forth, I couldn’t slow down. So it’s fun, it’s stressful, but those are the kind of games you need to play.”

Palmeiro was a force of nature Saturday, going 4-for-5 with two doubles, four RBIs and a towering home run just to the right of dead-center field. All four of his hits were squared up hard, and he showed an advanced middle-away approach, driving both doubles the other way to the left-center gap and lacing a hard single to center.

“My coaches say that I’m going best when that’s happening,” Palmeiro said of his approach. “I like to take what they give me. I’m not going to be picky about where I get my hits. The last couple days I’ve stayed to the middle of the field, and obviously that worked out. Generally, I don’t try to get too pull-happy, I feel like sometimes that messes me up. But I don’t want to be a slap hitter either and hit the ball the other way. So I just kind of look for a good pitch I can hit in that at-bat, and hopefully I get it.”

Palmeiro was one of the only NC State players who also turned in good at-bats Friday, and he looks locked in at the start of the season. His pretty lefthanded swing has obvious similarities to that of his father Rafael, but his presence might be as valuable to NC State as his special offensive gifts.

“He really hit that ball to right-center—I mean, he really hit that ball,” Avent said. “He hit a couple balls on the screws last night, hit a lot of balls on the screws today. You know what that guy is? He’s just a winner. He’s a competitor and a winner. He respects the game, understands the difficulties of the game, he doesn’t fight the game too much. Everybody has a tendency to fight the game, he doesn’t fight it too much.” 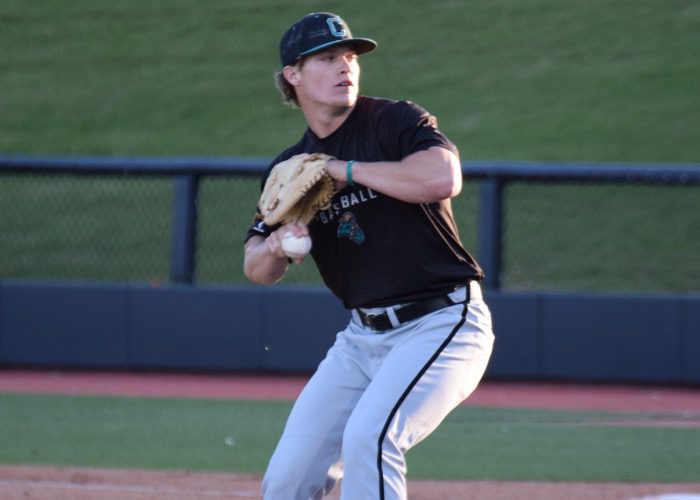 And Palmeiro did his damage against Coastal pitchers who showed very good stuff. His first two hits came against Coastal junior righty Alex Cunningham, who worked at 89-93 mph and showed very good feel for a sinking changeup against lefties like Palmeiro. His third and fourth hits came against CCU bullpen stopper Bobby Holmes, who didn’t have his usual 90-94 velocity but was plenty firm enough at 89-92, along with an 82-85 slider that flashed plus and a good hard curveball at 79-81. Those are two of Coastal’s three best arms, and they were shellacked by NC State on Saturday, allowing 11 combined earned runs on 11 hits over seven innings, though they also combined to strike out 12. And it’s not like all the damage came on wind-blown home runs; the two teams combined for 28 hits, and many of them were screaming line drives.

“Coming in, obviously we had kind of the same mindset—the ball’s gonna carry. But actually, when we were taking BP, all we kept talking about was hitting line drives and ground balls, because yesterday we played at the Pelicans’ stadium, and we didn’t have a lot of good at-bats,” Palmeiro said. “Usually you just kind of focus on line drives and get your swing going the right way. I guess we squared them up enough and got them up in the wind, but we squared up a lot of those today.”

The Wolfpack also got a big go-ahead solo homer from breakout candidate Joe Dunand (who had struggled to find his timing Friday and through his first three at-bats Saturday) to break a 7-7 tie in the eighth, and then a two-run homer from speedy leadoff man Josh McLain later in the inning to provide some breathing room. McLain has sneaky pop, but it was his first career home run, and it further ignited the dugout.

NC State’s homer parade actually started in the first, when Andrew Knizner went deep against Cunningham. Knizner had an awful day Friday, when his inaccurate throwing helped Old Dominion steal six bases, but he was much better on Saturday, throwing out two basestealers and picking a runner off second base on a back-pick.

Coastal answered with three runs in the bottom of the first, highlighted by the first of cleanup man Zach Remillard’s two home runs on the day, but rather than hang their heads, the Wolfpack fought right back. An important emotional boost came in the form of blue-chip freshman second baseman Xavier LeGrant’s solo homer to left field in his first collegiate at-bat in the second inning. LeGrant hit a low laser and sprinted out of the box, then lost his helmet after rounding first and exuberantly circled the bases, then was mobbed by his teammates in front of the dugout.

“First swing he’s ever taken in his life in college,” Avent said. “He’s such a gamer, now. This guy, I don’t want to put any expectations on him, I don’t like expectations — I’ve been in college baseball a long time. But that guy has an extremely high ceiling. This is new to him, you know what I’m saying? So when everything finally clicks with that guy, you’re talking about a guy who has a chance to be very, very special as a player. He could be one of the all-time best players at NC State. I don’t want to put any kind of expectations, but he has that kind of ability. You saw when he hit the home run, he made that turn in probably three and a half seconds. He went by so fast, I was afraid he might have missed first. He was flying — he smelled triple right there. When he plays with that kind of energy, he’s an exciting player.”

And when NC State plays with that kind of energy, it is an exciting team. The pitching still needs to be worked out, as the Wolfpack starter failed to get out of the third inning for the second straight day. But it would be foolish to read too much into ace lefty Brian Brown’s struggles on a day when every pitcher struggled in Conway. And at least NC State knows it can always count on veteran lefty Will Gilbert, whose 81-82 mph slider was downright dastardly in his two scoreless innings of relief, during which he struck out three.

There’s a lot of season left and a lot of work to do for NC State to live up to its full potential, but Avent should sleep much better tonight.