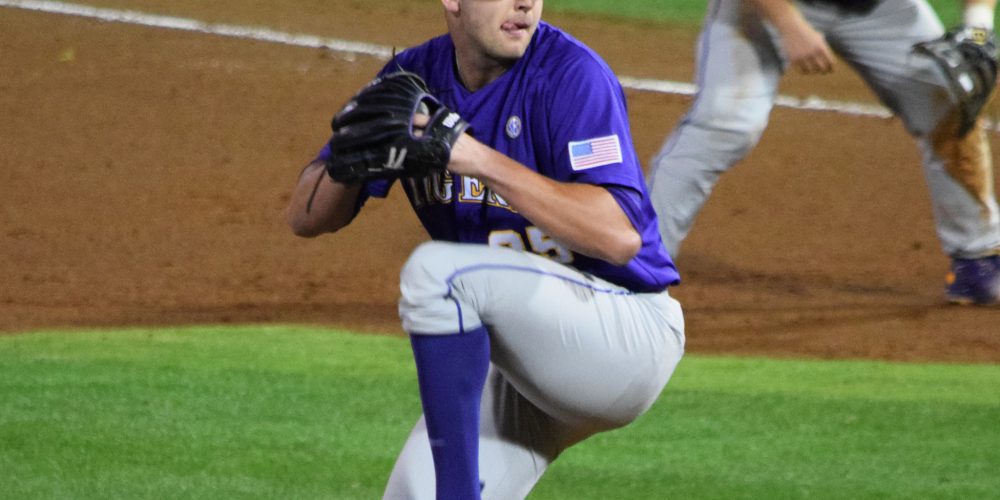 Alex Lange looked the part in a start against Texas A&M. (Kendall Rogers)

Lange jumped on the college baseball scene with an emphatic roar last season, as he tallied an unblemished won-loss record, had impressive across the board numbers and earned All-American honors. As LSU coach Paul Mainieri said on several occasions last season, he never pitched or looked like a freshman.

Somehow, after just five starts as a sophomore this season, some have begun to question Lange’s true dominance and consistency after he tallied a 4.50 ERA in 30 innings, along with 34 strikeouts and 14 walks in those starts. Never mind the fact that he also had some bright moments, starting last week’s game against Alabama with six shutout innings before having some uncharacteristic struggles in the seventh.

Fair or not, a small cloud hung over Lange’s head as he took the mound against No. 2 Texas A&M and Friday night. He wasn’t always great with his command, but more often than not, we saw shades of what made him one of college baseball’s elite last season in a 3-2 victory.

Say it from the rooftop: Alex Lange isn’t going anywhere.

“Honestly, I don’t think he’s pitched much differently than he did last season. The last three or four outings he has pitched out of some big jams and been clutch,” Mainieri said. “I don’t see a big difference and I’ve been trying to tell everyone that his stuff is very similar with his hard curveball and others.

“I think a little bit of the book is out on him and teams are trying to lay off his breaking ball, and that can hurt a little bit when his fastball command falls behind and the curveball isn’t as effective if he gets behind in the count,” he continued. “I thought his changeup was a lot better tonight. I also thought Lange pitched courageously tonight.”