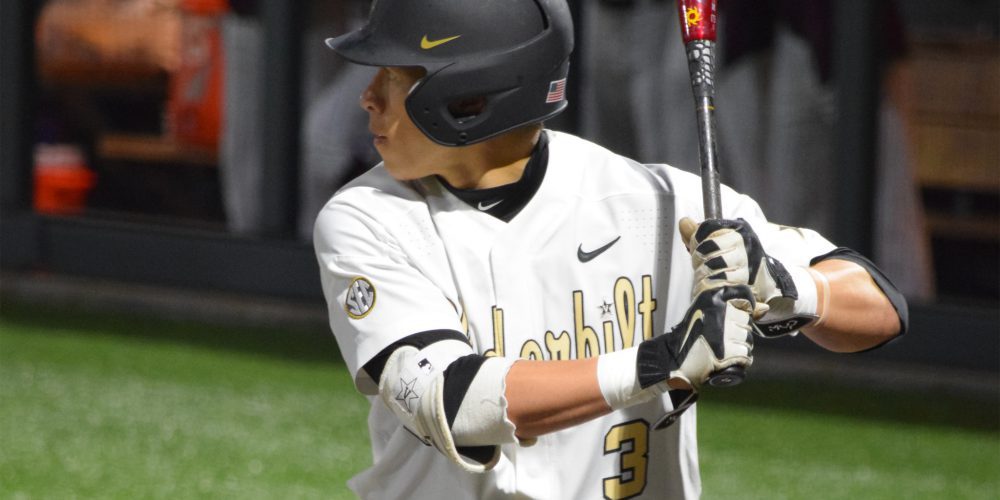 NASHVILLE, Tenn. — No trip to the Music City disappoints, and this one was no different as Mississippi State and Vanderbilt, both teams looking to make a statement to begin Southeastern Conference play tangled.

State had a bit more to prove entering the weekend. The Bulldogs shined against scuffling Oregon two weekends ago, and followed that up with some midweek struggles at home. Meanwhile, Vanderbilt was off to an impressive start from a record standpoint, but had yet to be tested against a rank-worthy type of club.

Mississippi State junior righthander Dakota Hudson looked the part in the series opener against the Commodores, as the Bulldogs inched out a narrow victory, while the MSU bullpen carried the day in Game Two. Vandy finally got its offense going in the series finale to salvage a game.

In our latest takeaways piece, we have analysis on each aspect of the teams, while also dissecting players from a production and prospect standpoint, among other items.

It was nice to get a close look at the Bulldogs up in the Music City this past weekend. While the Bulldogs certainly have had some bad losses so far this season, they also entered the Vanderbilt series with some impressive wins, sweeping Oregon at home two weekends ago before hitting the road to Vandy. Overall, MSU looked like a team with a lot of potential, something we expected coming into the season.

• Dakota Hudson did not disappoint in the series opener against the Commodores. He threw nine innings of impressive work and racked up a solid strikeout total. But, it was his makeup that was most impressive. Even when Vandy threatened to score runs, his demeanor never changed, he zoned in and was able to find a way to get out of the inning. That was a deviation from the norm that surrounded Hudson as a sophomore last season. Stuff-wise, he was terrific, sitting 93-95 and up to 96 mph consistently and throughout his entire start, while also throwing his typical 89-91 mph cutter and getting some early swings on the pitch. His cutter was especially effective as in hitched inside against lefthanded hitters. The righthander threw a mid-80s changeup that was quality, but they were few in number, while his 81-83 mph curveball has potential to be a wipeout pitch with some refining. Hudson didn’t throw a lot of curveballs against the Commodores, but it’s an offering I’d like to see him utilize more moving forward. Hudson probably isn’t going to move ahead of guys like prep stars Jason Groome and Riley Pint in the draft pecking order, but he certainly has a chance to move ahead of some college arms currently ahead of him.