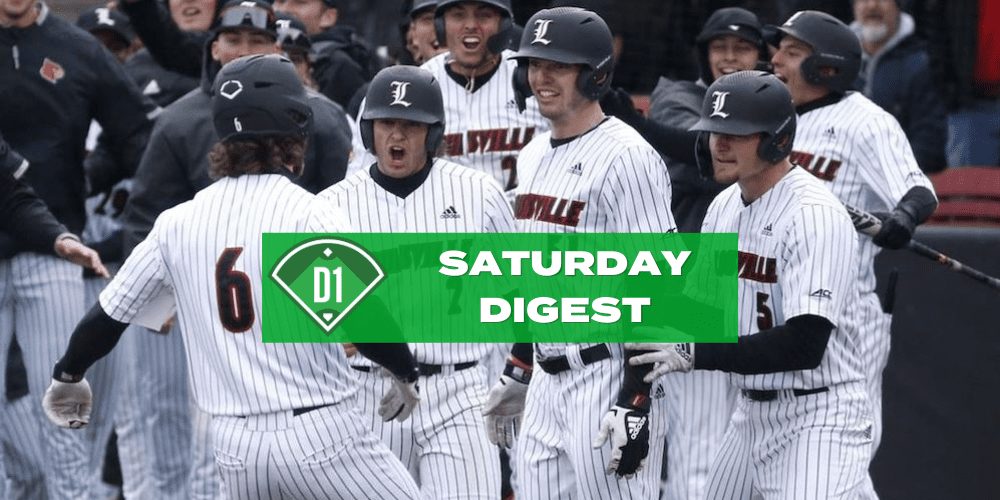 The Cardinals went buck wild offensively Friday afternoon against the Fighting Irish, and they followed up that performance with a late-inning surge on Saturday in an 8-1 triumph to take an important ACC series. It took eight innings for the Cards to explode, but when they did, Ben Bianco hit a grand slam and Ben Metzinger hit a two-run home run. Metzinger and Logan Beard each finished the night with two hits. Meanwhile, Louisville starting pitcher Jared Poland tamed a potent Notre Dame lineup, striking out 10, walking one and allowing three hits in seven shutout frames. There was plenty of uncertainty about the Cards entering the weekend. Not so much anymore. Statement made.

Wake Forest had a golden opportunity to make a statement last weekend against Florida State but was unable to do so. However, the Deacs are taking matters into their own hands this weekend at Georgia Tech. Wake won the series opener before going nuclear on Saturday in a dominant 27-7 victory. The big inning for the Deacs was the fifth that resulted in 12 innings. In that frame, Brock Wilken hit not one but two home runs, while Brandon Tinsman hit a two-run homer. Wilken finished the night with three hits and five RBIs, while Tinsman had four hits and four RBIs and leadoff hitter Nick Kurtz had two doubles, six total hits and a whopping six RBIs … As for Miami, the Hurricanes pitched at a high level for the second-straight day in a 4-1 series-clinching win over Clemson. Karson Ligon allowed just one run on three hits in 5.1 innings, while Gage Ziehl tossed 1.2 shutout frames and Andrew Walters closed it out with two shutout frames.

It has been an exciting weekend in the Pac 12, and the marquee series of the weekend began on Saturday. Arizona struck first blood with a 3-2 win in the series opener. Arizona hard throwing righthander TJ Nichols put together a solid start, striking out eight, not walking anyone and allowing just two runs on eight hits in eight innings of work, while Stanford righty Alex Williams also threw well, punching out 10 and allowing a run on three hits in seven innings of work. U of A took the lead in the eighth with a two-run frame, while Stanford’s final out in the ninth was recorded at home on a terrific throw after a fly out. It was an exciting finish to what was an outstanding showdown between two strong clubs.

You knew it would be a see-saw season for the Aggies, but they entered the weekend needing to make a bold statement against LSU. The Aggies dropped a home series to Penn and went 1-2 at the Frisco College Classic with losses to Washington State and Wichita State. They needed to make those games up somewhere, and they did just that this weekend with two wins over the Tigers to clinch the series. A&M defeated the Tigers 11-7 on Saturday to take the series. Moo Menefee threw better out of the bullpen, while the pitching staff punched out the Tigers 15 times on the night. Furthermore, Jack Moss had two doubles and Ryan Targac had three hits and a whopping four stolen bases. Was this weekend a turning point for Jim Schlossnagle’s Aggies? Time will tell.

Last night and earlier this season, we wrote extensively about electric Tennessee freshman righthanded pitcher Chase Burns. He’s truly one of the premier freshman pitchers in college baseball. But just down I-40 in the Music City, rival Vanderbilt has quite the freshman, too, in lefthander Carter Holton. Holton put together yet another outstanding start Saturday afternoon in a dominant 6-0 win over Missouri. He struck out 10, walked one and allowed three hits in seven shutout innings. He also threw 109 pitches — 77 for strikes. How good has Holton been overall this season? For the year, Holton now has a 1.70 ERA with 45 strikeouts and just six walks. Pretty impressive.

6 — Troy has our attention in the Sun Belt

The Trojans went out during the offseason and looked to bring in some younger energy with the hire of former Michigan State and South Carolina pitching coach Skylar Meade. It’s a long season, but Meade is already making an impact for the Trojans. Not only are the Trojans sitting at 13-5 overall right now, but they clinched a Sun Belt series win over Louisiana on Saturday in a 4-3 triumph. Brady Fuller started for Troy and struck out six and allowed three runs on five hits in 6.1 innings of work, while Keaton Fuller tossed 2.1 shutout frames out of the pen. Easton Kirk and Trey Leonard each led the Trojans with two hits. With the win, that’s now seven-straight W’s for Meade’s club. Keep an eye on those guys moving forward.

Both the Gators and Bulldogs notched important SEC series wins on Saturday to give Kevin O’Sullivan and Scott Stricklin, respectively, win No. 600. Let’s also give a hat tip to UCLA skipper John Savage, who also earned win No. 600 this week. For the Gators, Wyatt Langford hit a pair of home runs and finished the night with four RBIs, while BJ Riopelle, Kendrick Calilao and Kris Armstrong each hit homers in a dominant 13-6 series-clinching win over Alabama … As for Georgia, Corey Collins had a massive day at the plate in a 12-11 series-clinching win over Mississippi State. Collins finished the afternoon with two walks, a home run, three hits and four RBIs, while Chaney Rogers had a double, two hits and three RBIs and Connor Tate tallied a two-hit and two-RBI performance. Congrats to both outstanding head coaches on a fine accomplishment.

The Golden Eagles got out of their element last weekend in Dallas, getting swept by DBU in three games. However, they’re back in their element this weekend to start conference play against Florida Atlantic. USM won the series opener in thrilling fashion. And on Saturday, they were down 4-1 entering the bottom of the sixth inning before scoring two runs in both the sixth and seventh innings and another in the eighth to beat the Owls, 6-4. Reece Ewing hit a home run in the win, while leadoff hitter Gabe Montenegro had a productive night with a hit and two RBIs. Hunter Riggins didn’t have his usual dominant start, allowing four runs on six hits in 5.2 innings, but credit the USM bullpen — Dalton Rogers tossed a shutout frame and Landon harper struck out three in 1.2 shutout frames.

After winning the series opener against the Bears on Friday, TCU went for the series win on Saturday. And for much of the afternoon, it looked like it would take a win on Sunday to win the series. But TCU said not so fast down 9-6 going into the top of the ninth inning. In that frame, the Frogs tied the contest at 9-9 on Tommy Sacco bases loaded walk, a Luke Boyers hit by pitch and a Mason Speaker RBI single. The Frogs won the game in the 11th with a three-run top of the inning as Speaker scored on a bases loaded walk and an error led to two more runs. TCU clinched the important series with an 11-9 triumph. Boyers finished the afternoon with two hits and an RBI, Sacco had a double and three RBIs and talented freshman David Bishop knocked in a pair of runs.

Ole Miss and Auburn certainly traded blows the first two days of the series, but it was Mike Bianco’s Rebels who dealt the decisive knockout punch in a series finale 15-2 win. On the mound, Jack Dougherty struck out seven and allowed two runs in five innings of work, while Hunter Elliott was a bright spot with three shutout frames out of the bullpen. As for the offense, what a day it was. Tim Elko (who else?), Hayden Leatherwood and Kemp Alderman each hit homers in the victory, while TJ McCants had two hits and Peyton Chatagnier had three hits and three RBIs. Ole Miss flexed its muscles in a big way in front of a strong crowd at Plainsman Park.