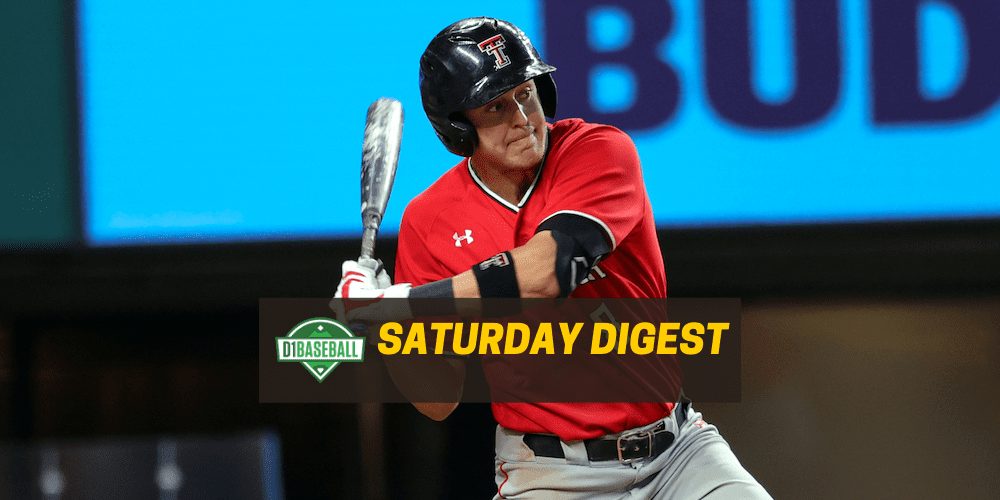 Kurt Wilson made headlines Friday night for good reason. Wilson stole home to beat Texas in an absolute thriller. So, on Saturday, he felt the need to up his game just a little bit. The Red Raiders and Longhorns were entangled in yet another outstanding showdown on Saturday. And the Longhorns grabbed a 12-11 lead in the 10th inning on a Doug Hodo RBI double. However, it was time for Texas Tech and Wilson to strike back yet again. Cole Stilwell tied the game at 12 in the 10th with a fielder’s choice. Then, with bases loaded and a 1-0 count, Wilson went opposite field for a grand slam to give the Red Raiders a 16-12 victory and the series win. He finished the afternoon with a pair of hits, while Tech’s Easton Murrell finished the day with a home run, two hits and three RBIs. For Texas, Ivan Melendez, and Murphy Stehly each hit two homers. But the story in this game, once again, was Kurt Wilson coming up in the clutch for the Red Raiders. After the first couple of weekends, the Red Raiders looked like a team with some uncharacteristic, glaring, holes. However, Tim Tadlock has this team playing exceptionally well, and suddenly they’re 20-4. Some things never change.

How about those Volunteers? Goodness gracious. Tennessee made a statement Friday night with a dominant win over Ole Miss, but it left zero doubt Saturday night in a 10-3 triumph over the Rebels to take the SEC road series. As was the case in the series opener, the Vols started the game on a hot note with Drew Gilbert and Trey Lipscomb knocking in runs in the first inning before Jared Dickey’s sacrifice fly made it 3-0 in the second before the home fans could even sit down to enjoy their popcorn. In the end, Gilbert finished the night with two doubles, while on the mound, righthanded pitcher Chase Dollander had his best start of the season, showing electric stuff with the fastball and slider, and striking out 10 and allowing just three hits in 6.1 innings of work. Tennessee finished the night with 17 hits and has now outscored the Rebels 22-4 in the first two games. It has been total domination. Let’s just go ahead and say it: Tennessee deserves to be No. 1.

Take one gander at the hashtag #Gamecocks on Twitter and you’d think Mark Kingston’s club had three wins on the season. On one hand, there’s no doubt the Gamecocks have had some stinker weekends and some ugly losses. However, they also took a series from top-five Texas at home, and oh by the way, now have a series win over top-five Vanderbilt this weekend after beating the Commodores 8-6 on Saturday. South Carolina caught my attention on Friday by lighting up Vandy fab freshman Carter Holton. It continued its impressive ways Saturday afternoon, as Braylen Wimmer had two homers and five RBIs, and Brandt Belk and Kevin Madden each tallied two-hit performances. Aidan Hunter was key out of the bullpen for Kingston’s club, striking out three in 2.1 shutout innings. The Gamecocks are baseball’s version of a roller coaster, but on days like these, they sure are a lot of fun.

How about this for a Saturday performance? Hatcher made history a couple of days ago by hitting for the cycle for the Owls. But less than 72 hours later, Hatcher did it again in a 17-9 win over North Florida to clinch a series win. Not only did Hatcher hit for the cycle against the Ospreys, but he also knocked in five runs in the winning effort. For the season, the Mississippi State transfer is hitting a team-best .411 with 13 doubles, three triples, two homers and 17 RBIs. And speaking of KSU, it is now an impressive 15-7 with a 5-0 record in the Atlantic Sun. Here’s a tip of the cap to Hatcher for another day of offensive prowess.

Can anyone slow down the Cavaliers right now? Virginia has been an absolute machine so far this season and that trend has continued this weekend against Wake Forest, beating the Demon Deacons 8-0 on Saturday to clinch yet another series win. The Cavaliers got a strong start from Jake Berry, who was making his first career start. Berry struck out nine in five no-hit innings, while the pitching staff had a no-hitter going until there were two outs in the ninth inning. Jay Woolfolk and Paul Kosanovich each threw two shutout innings out of the bullpen. The pitching staff overshadowed anything offensively, but Alex Tappen led the unit with a pair of homers and five RBIs. Virginia has outscored the Deacs 16-2 in two games, and you can check out Aaron Fitt’s piece on Berry and the Cavaliers, here.

It’s probably time to get the Hurricanes back into the Top 25 rankings. Gino DiMare’s club has now won three-straight series since losing that home series to Florida. They took care of Boston College and Clemson before winning the first two games against North Carolina this weekend — taking the series finale 7-3 at home. Karson Ligon continues to throw well in the starting rotation, striking out six, walking two and allowing two runs in five innings, while Edgardo Villegas had four hits and YoYo Morales chipped in a three-hit performance. Miami is trending the right direction as ACC play continues.

Boy, this loss hurts the Huskies. Connecticut entered the weekend as one of the nation’s hottest teams, and though it won the series opener, Jim Penders’ club dropped the second game to the Rams, 6-2. URI entered the day with just two wins on the season, and after the loss, the Huskies dropped 20 spots in the RPI. Yes, it’s entirely too early to look at the RPI, but it’s still interesting data at this juncture. URI starting pitcher Dom Picone had a performance to remember, striking out 11, not walking anyone and allowing just two runs on four hits in seven innings. URI reliever Sean Sposato also tossed two shutout frames. After splitting the first two games, UCONN can ill afford a series loss to URI on Sunday. Stay tuned.

8 — LSU Plays Its Best Game Of The Season

We finally got a glimpse of what happens when all the pieces come together for LSU in a game. It defeated Florida 16-4 in a game that saw everything go LSU’s ways. For starters, the Tigers didn’t make a single error in the win, while the offense set the tone with a Tre Morgan two-run home run in the first, followed by a six-run frame in the third — Brayden Jobert hit a three-run home run, Gavin Dugas hit a home run and two runs scored via Florida errors. As for the pitching staff, righthanded pitcher Ma’Khail Hilliard started and struck out seven in 5.2 innings, while relievers Paul Gervase and Trent Vietmeier did their jobs. In addition to the job the pitching staff did, Dylan Crews hit a three-run home run, Jobert finished the night with four RBIs and Jordan Thompson chipped in a three-hit performance. I’m fascinated to see if LSU can put together another ultra clean showing in the series finale against the Gators.

Robert Woodard and his 49ers got very acquainted with Old Dominion last season, playing back-to-back weekend series against the Monarchs at one point. So, to see the 49ers very familiar with the Monarchs this weekend comes as no surprise. Charlotte made easy work of ODU in the series opener on Friday before cruising past the Monarchs on Saturday, 13-8, to clinch a series victory. Jake Cunningham had a big day for the 49ers, hitting a home run, tallying two hits and knocking in four runs, while Will Butcher knocked in three runs and Nate Furman and Cam Fisher (who hit a home run) each finished the day with three hits. Charlotte made waves last season by almost hosting an NCAA Regional. Now, it appears ready to make a strong move again this spring. Keep an eye on this surging group.

The Terps were on the losing end of things Friday afternoon. However, they bounced back in a big way on Saturday with an 11-5 triumph. The Terps got a huge day offensively from Matt Shaw, who finished with two homers, three hits and four RBIs, while Chris Alleyne also hit a home run and knocked in two runs and tallied three hits. Luke Shliger also had a strong offensive showing atop the lineup with two hits and a walk. After an iffy start from ace pitcher Nick Dean on Friday, Ryan Ramsey stepped up on Saturday with three strikeouts and just one run and three hits in seven innings. That season-opening series loss to SEMO now looks like ancient history after four-straight series wins. DBU is finally looking like the team we had predicted coming into the season.