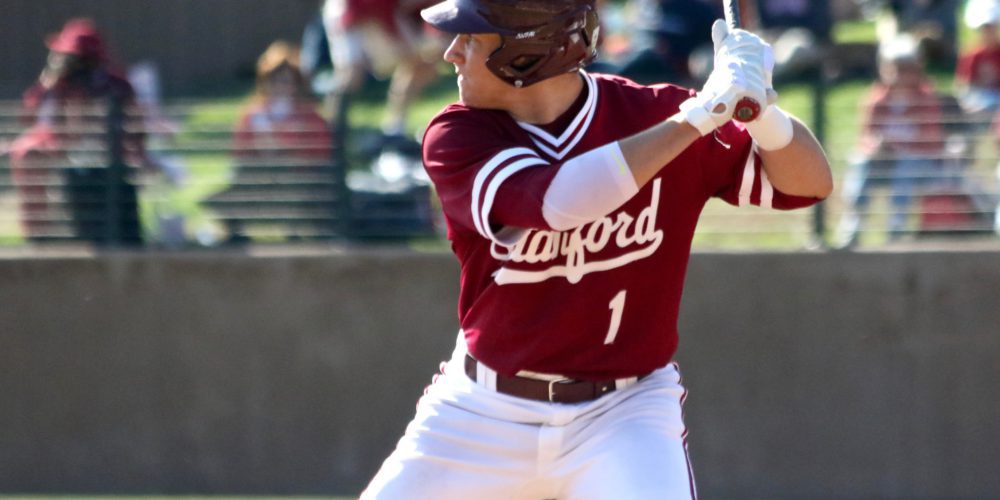 Mikey Diekroeger put Stanford ahead in both games. (Shotgun Spratling)

The Blue Devils were the only team to win a series against a top-10 opponent this weekend, taking two of three from Cal in a competitive series in Durham. Even after Duke lost Friday with ace Bailey Clark on the mound in a ballyhooed duel against Daulton Jefferies, the Devils fought back to take the next two games. Heralded freshman shortstop Zack Kone (2-for-5, 2 RBI) was one of six Devils to record multiple hits in Saturday’s 6-5 win, and he scored the winning run on Evan Dougherty’s walk-off single in the 10th. Duke won in walk-off fashion again Sunday, as freshman Griffin Conine delivered a walk-off RBI double to score Dougherty in the ninth (a rally that Kone sparked with an infield single).

The big difference: Duke won the battle of the bullpens Saturday and Sunday, getting three scoreless innings from tenacious veteran Nick Hendrix and two from emerging righty Karl Blum. Duke is deeper on the mound than it was last year, and it is well stocked with talent in its freshman and sophomore classes. It won’t be easy to make a regional in the ACC, which is deeper than I can ever recall — as evidenced by Duke, the No. 11 team in the ACC in my preseason pecking order, winning a series against a top-10 club.