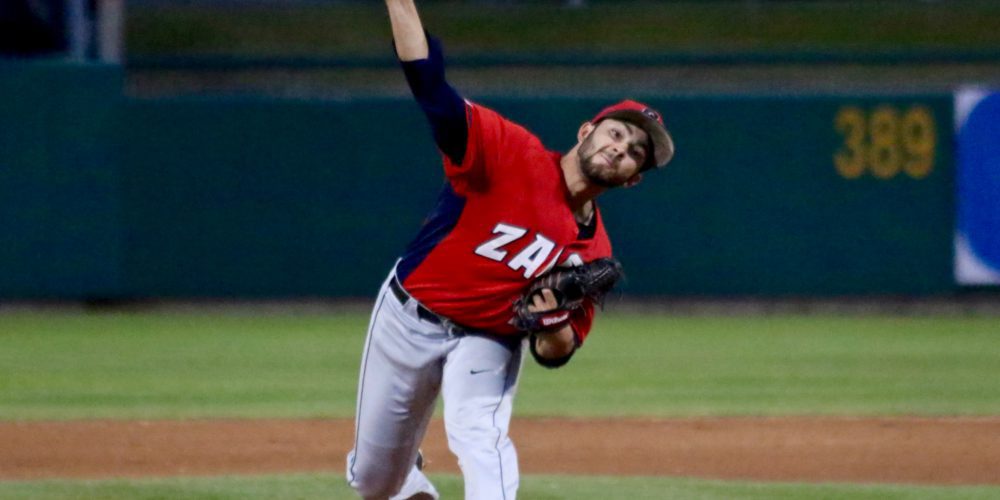 STOCKTON, Calif. — The West Coast Conference plopped down its winning hand on the first day of the WCC tournament with four aces and two great games at Stockton Ballpark.

Top seed St. Mary’s rallied from a 5-0 hole to beat Pepperdine, 8-7. A pitchers’ duel between junior righthanders A.J. Puckett and Corbin Burnes that drew nearly 50 scouts turned into a back-and-forth 11-inning slugfest that was highlighted by a pair of game-tying Nate Nolan home runs.

But Brandon Bailey was the story of the day, leading Gonzaga to a first-round win with a 17-strikeout, complete game effort against BYU.

The aces in the West Coast Conference tournament could match up with the front line starters in any mid-major conference and likely any conference outside of the SEC. But while Puckett’s scoreless streak, Burnes’ draft stock and Michael Rucker’s unblemished record for BYU garnered plenty of attention this season, Bailey has been under-appreciated. On Friday, he showed just how good he can be as he set a new career high and WCC Tournament strikeout record.

While his ace compatriots each reached 95 mph, the 5-foot-10 Bailey worked at 91-92 mph in the early innings, touching 93, before settling in at 89-91 late in the game. But he showcased elite command, spotting the pitch in all four quadrants with remarkable consistency. Bailey complemented his fastball with a short, sharp-breaking curve and a disappearing 79-81 mph changeup that he was able to bury on righthanders and get lefties to swing and miss.

Bailey mixed his pitches well and mowed through the BYU lineup, particularly in the first three innings when he struck out eight. He had only allowed two hits going into the seventh inning when BYU got on the board with a solo homer from Keaton Kringlen. In each of the next two innings, the Cougars added solo shots as well that slightly muddled Bailey’s stat line in an otherwise magnificent performance.

The Gonzaga righthander felt two of the homers could have been fly ball outs in a different ballpark as BYU was able to take advantage of the sharp corner that juts out from the 300-foot foul pole in left field. Unrattled by BYU trimming a 5-0 lead to a two-run game, Bailey responded to the home runs by quickly finishing out the rest of the inning each time.

After the game, he earned a dousing of water from his teammates and of cheers from the Gonzaga fans in attendance that stayed around to applaud his departure from the field after his Herculean 138-pitch performance against one of the West Coast’s most physical lineups.

In the third inning, left-handed hitting Gonzaga catcher Joey Harris led off with a lazy fly to left field. However, in the twilight sky, Eric Urry never saw the baseball. What should have been a routine fly ended up being a double for Harris. The next two batters got out, but instead of the inning being over, Gonzaga still had another chance.

Urry also had a chance — to redeem himself — when Sam Brown flared a ball to shallow left but Urry’s sliding attempt came up short as the ball bounced out of his glove once he hit the ground. Brown stole second base and West Coast Conference Player of the Year Jeffrey Bohling shot a double into the left-center field gap to bring him home. A potential 1-2-3 inning for Michael Rucker turned into two runs — which proved to be the final difference in the game.

Gonzaga and BYU had to wait around an extra hour before the game started and it was all because of Nate Nolan and his pair of game-tying home runs. Gonzaga wasn’t surprised at having to wait though; the Bulldogs had already seen Nolan do the same to them earlier in the season.

Nolan’s dramatics were set up by Pepperdine trying to squeeze an extra inning out of its ace. After Chris Fornaci blasted a two-run home run in the top of the eighth inning, it was widely debated in the press box whether or not the Waves would bring A.J. Puckett back out for the eighth inning despite his pitch count being at 111. With lights out closer Ryan Wilson having moved back into the starting rotation last week, head coach Rick Hirtensteiner chose to rely on Puckett.

The righthander tried to go inside on pinch-hitter Charles Zaloumis, but instead hit him. A single and a four-pitch walk forced Pepperdine to go to the bullpen. After Anthony Villa got Saint Mary’s on the board with a two-run single, Nolan stepped up to the plate and played hero driving a pitch the other way over the right-center field for a three-run homer to tie the score, 5-5.

It was a startling turn of events that not only helped put Pepperdine in the loser’s bracket, but also may have cost Puckett the Pepperdine single-season ERA record of 1.25. He left the game with a 1.00 ERA, but after all three of his inherited runners scored, it jumped to 1.27.

Pepperdine appeared to rally to salvage the game when Matt Gelalich hit a two-run triple in the 10th inning, but Nolan would have none of it. With a man on first, he gave himself two pitches to swing for the fences. He only needed one.

Nolan jumped all over an inside fastball and cranked it deep to left field for a no-doubt game-tying home run. An inning later, the Gaels secured a walk-off victory when Zach Kirtley singled to left field to score Brett Rasso.

Bailey also discusses the Bulldogs’ team unity and what it would mean to win the WCC Tournament title:

Machtolf also discusses saving the bullpen and how opportunistic the Bulldogs have been this season:

BYU head coach Mike Littlewood talks about Gonzaga RHP Brandon Bailey shutting down the Cougars lineup with his “electric” three-pitch mix and how he was able to best BYU ace Michael Rucker.

Littlewood also discusses the Cougars’ chances of earning an at-large berth in the NCAA tournament:

Saint Mary’s RHP Corbin Burnes talks about his team rallying to get him off the hook after he allowed three runs on 10 hits in 5.1 innings and his battery mate Nate Nolan doing the big damage with a pair of home runs.

Burnes also discusses going up against A.J. Puckett and the matchup of aces on the first day of the WCC Tournament:

Pepperdine head coach Rick Hirtensteiner talks about his team’s mindset after a tough 8-7 extra-inning loss in their WCC Tournament opener.

– Head coach Eric Valenzuela was worried about his St. Mary’s team just being excited to be in the tournament rather than trying to win it. After twice showing resiliency to come back from deficits, I don’t think that is a concern anymore. The Gaels picked up their starting pitcher, Corbin Burnes, just as he has done for them all season. The Gaels have a great opportunity in front of them.

– Brandon Bailey was fantastic and the offense was opportunistic with Jeff Bohling leading the way with a pair of RBI doubles. The Bulldogs are in great position after not having to use any bullpen arms.

– When St. Mary’s tied the game in the eighth inning, I said that whoever loses that game would not win the tournament. It’s extremely tough to come out of the losers’ bracket after having to play extra innings on the first day. However, the Waves do have multiple quality arms that could pitch them back into contention this weekend, starting with Ryan Wilson on Friday.

– BYU head coach Mike Littlewood said after the game he thought his team needed to win on Friday to lock up an at-large berth in the NCAA tournament. To do that, the Cougars need someone to step up on the mound after Michael Rucker. Injuries to Maverik Buffo and Hayden Rogers have depleted the pitching depth, but conference tournaments are often the time when a talented young player will step forth and grasp the spotlight. The last time Riley Gates started against Pepperdine he took a no-hitter into the sixth inning. If he gets the ball, he could be a prime breakout candidate.