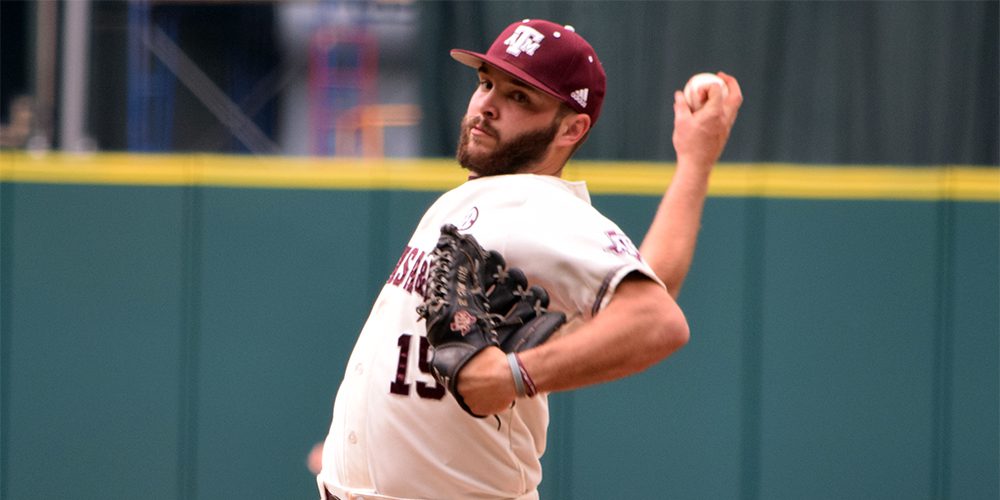 What we liked: I was certainly interested to see how Baylor’s offensive lineup would fair against much stiffer competition this past weekend. But the most intriguing element of this team was the weekend rotation. Sure, the Bears pitched well at home the first two weekends, but how would they do in Houston? Quite well, actually. RHP Nick Lewis kicked off the weekend in style with an impressive performance against Ole Miss. Lewis showed me more velocity than expected, sitting 89-91 and up to 92 with a sinking fastball, while his changeup was a quality offering at 83-84. He also showed a 79-81 changeup to keep hitters off his fastball. RHP Montana Parsons was OK against LSU. He still looks like an arm with very little wiggle room, sitting anywhere from 89-93 and up to 94 with his fastball, while his secondary offerings were just average. Then there’s lefty Cody Bradford, who sat mid-80s with his fastball against A&M, but showed good command for his soft curveball. All three pitchers showed the ability to have strong springs, but you do have to remember about their long-term durability.

What we didn’t like: Steve Rodriguez and his coaching staff have the Bears playing at an incredibly high level, so it’s hard to find much wrong with this club. But you have to wonder about the viability of the offense long-term outside of a few hitters. For instance, Matt Menard and Kam Esthay are veteran guys who certainly will have solid campaigns, while freshman Shea Langeliers looks like an advanced young hitter and Richard Cunningham is off to a fantastic start. But this isn’t a lineup conducive to putting together big innings, especially via the long ball. So, across the board production will be needed throughout the season.